Armenia on verge of food crisis

Armenia on verge of food crisis Now, after the Azerbaijani army liberated Nagorno-Karabakh from occupation, Armenia will have to urgently look for new sources of wheat.
182 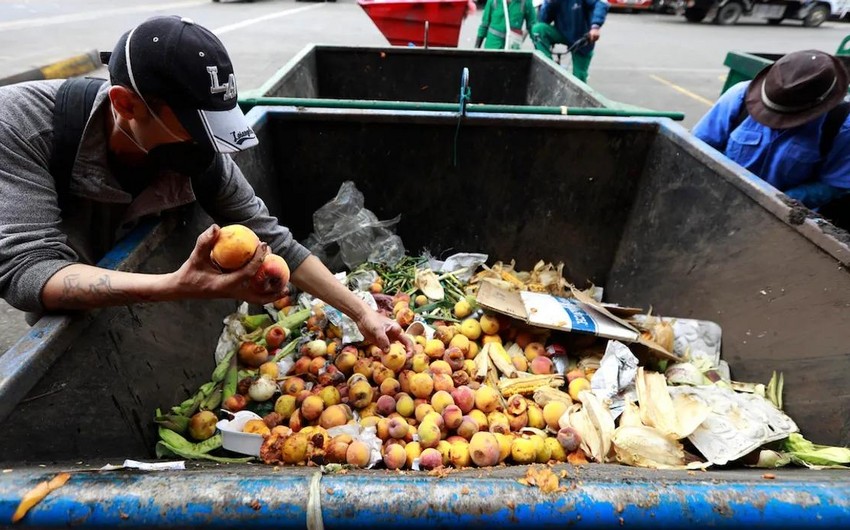 Armenia soon may face another serious problem - a shortage of agricultural products.

The sown area and production volumes of most crops in the country have been declining for several years. The coronavirus, and then the liberation of Nagorno-Karabakh from Armenian occupation, only brought the crisis closer.

During the regional conference of the Food and Agriculture Organization of the United Nations (FAO) for Europe, held in early November, it was also emphasized that Armenia is on the list of countries that need to be given priority attention to food and agricultural development.

In its reports, FAO has repeatedly noted the existing problems, which, in addition, wander from one report to another. It appears that the government is in no hurry to solve them.

At the same time, agriculture is one of the most important sectors of the country's economy. Today, it accounts for about 12% of the country's GDP (this figure also falls from year to year - in 2015, it was 17%). 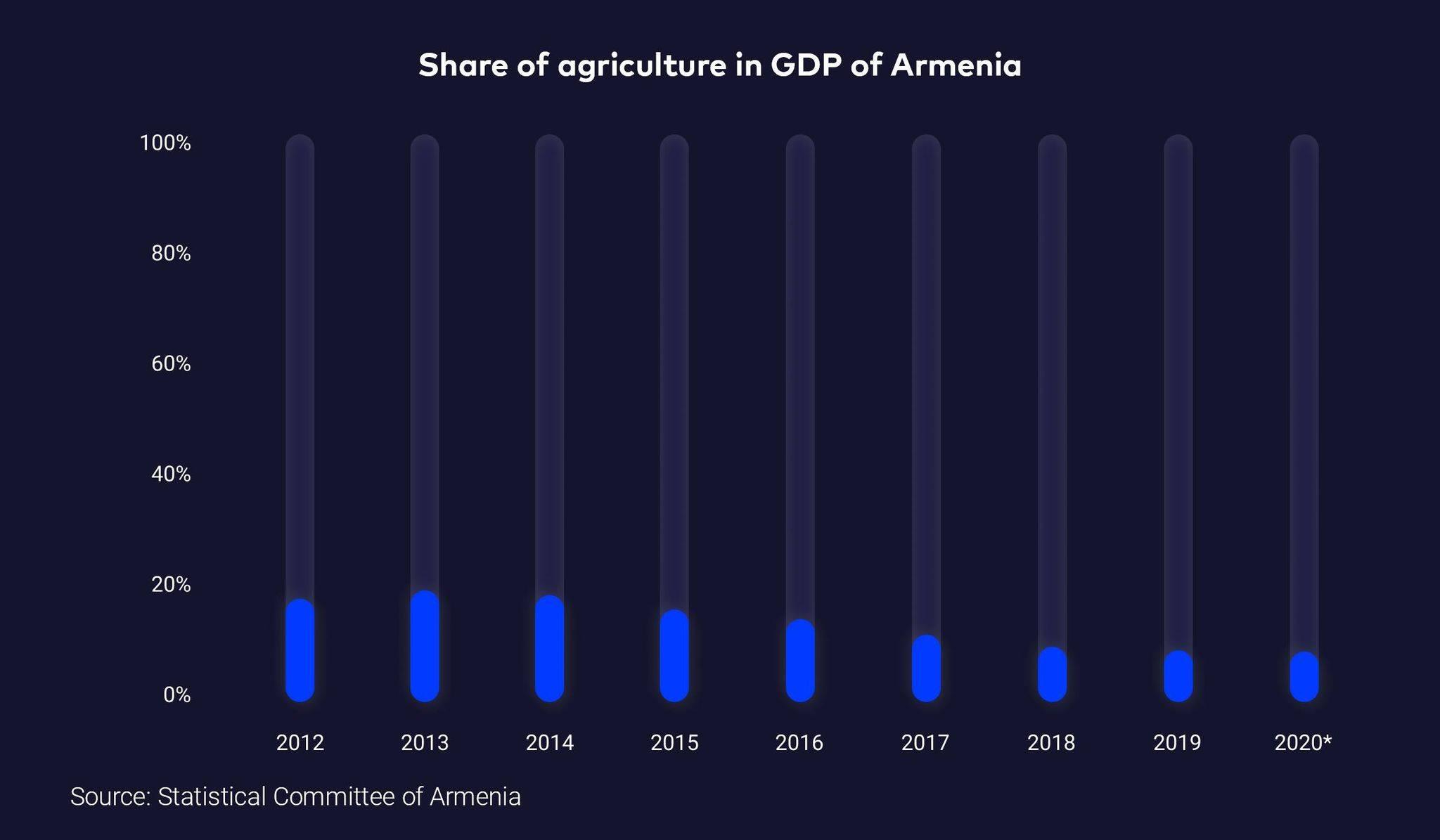 [Histogram of the share of agriculture in Armenia's GDP.

In particular, the problems include the lack of large farms (the average farm area is only 1.4 hectares), the low level of education in the field of agriculture (educational programs are not adapted to the conditions of a market economy), and limited funding for research in the field of agriculture. There is practically no production of fertilizers, chemicals used in agriculture, medicines for treating diseases in livestock. Besides, Armenia's agricultural development programs are vaguely written, without any specific, measurable indicators and stages of implementation and monitoring achievements. Such documents are not national but are aimed at solving some particular problems. The practical implementation of state policy in agriculture is threatened by a lack of funding, a lack of transparent implementation mechanisms, and a weak institutional and technical capacity of the public administration bodies responsible for the direct implementation of these programs.

The coronavirus is just adding fuel to the fire. It's not enough that the volume of fruit and vegetable production declining, but also, as noted by the FAO, against the background of COVID-19 in Armenia, logistical problems, especially the storage of expensive agri-food products, in many cases forced food producers to break contracts with farms for the supply of products.

Besides that, the production is falling, and even such low volumes may not reach the markets. Serious problems, if not a disaster, is expected with wheat. According to the Armenian media, from 390 to 420 thousand tons of wheat are consumed annually in Armenia. This year, the country planned to get 200 thousand tons of harvest - 59 thousand hectares for wheat were allocated in Armenia and another 40 thousand hectares in Nagorno-Karabakh, which until recently was under the occupation of Armenia. 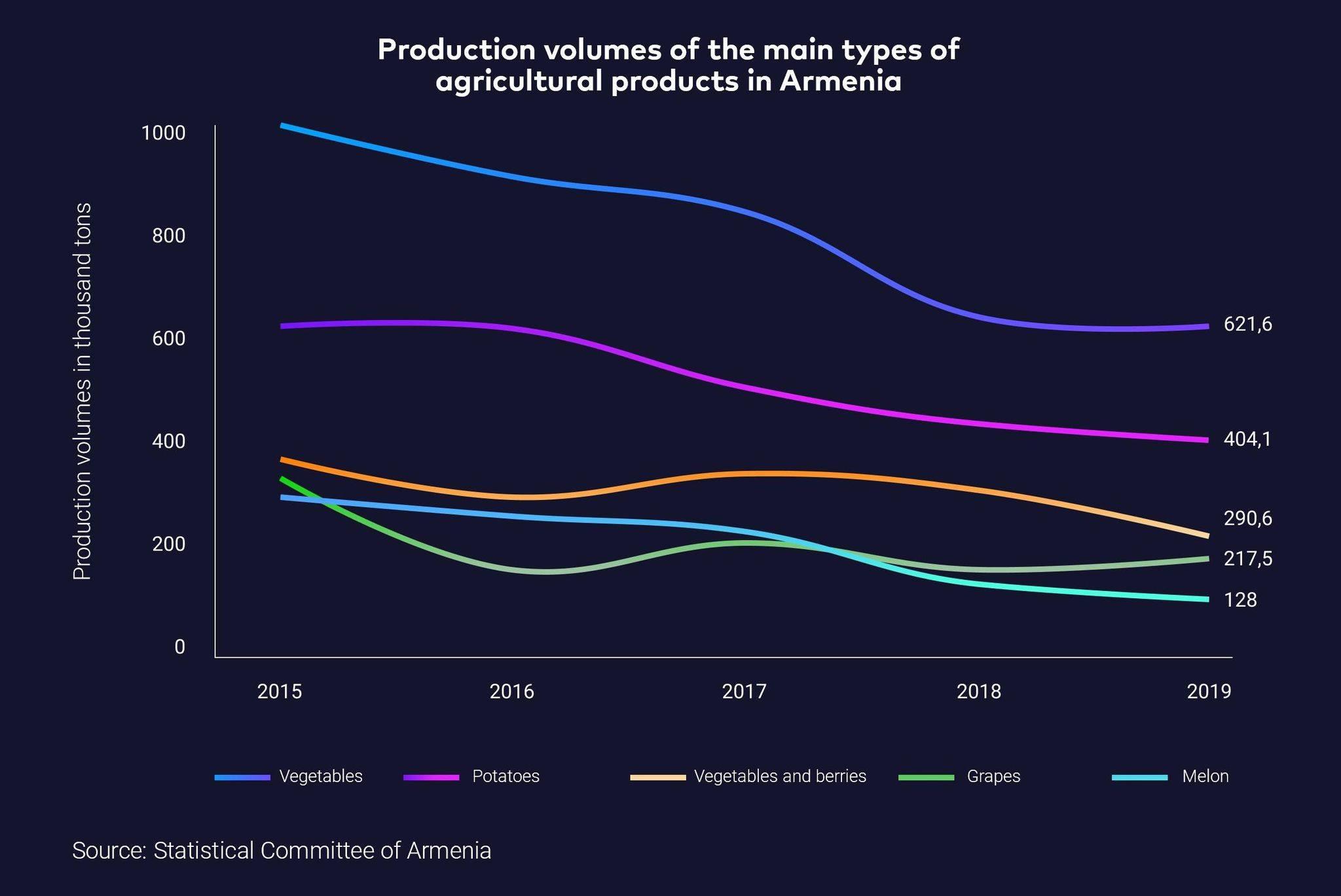 After the Azerbaijani army liberated Nagorno-Karabakh from occupation, Armenia will have to urgently look for new wheat sources (import from Russia or other countries). Back in 2018, Armenian journalists sounded the alarm - the cultivated areas were decreasing, and the volume of water intake from sources was growing. Chairman of the public organization "Agrarian-Peasant Union of Armenia" Hrach Berberian and ecologist, Chairperson of the association "For Sustainable Development," Karine Danielyan then told the media that the reason for the current situation lies in the poor and ineffective management of this area. If this continues further, then the problem will become more dangerous, and the consequences are irreversible. As mentioned above, the effectiveness of the measures being implemented wants to leave the best. The figures for 2019 were even worse. All this is aggravated by climatic changes (as well as the country's overall climatic conditions).

About 70% of the country is experiencing problems with water. By 2050, the country's average annual temperature will rise by 2.2%, further increasing drought. According to the Alliance for Financial Inclusion (AFI), Armenia has spent $ 221 million over the past six years to eliminate the consequences of natural disasters, drought, and frost, which damaged agriculture. In some cases, hail destroys 80-100% of the crop. In the future, given climate change, such problems will become even more severe. In such conditions, the development of agriculture should have become the primary task. However, Prime Minister Nikol Pashinyan prefers not to bother with this but "draws" beautiful numbers in reports.

However, it is no longer possible to hide the crisis, and the Armenian community questions the figures published by the state bodies. A few months ago, the Enlightened Armenia opposition faction leader, Edmon Marukyan, stressed that the country is in a deep crisis. Still, official statistics do not reflect the real situation because the numbers continue to be falsified. By the way, as we have all seen, the love to lie played a cruel joke with Pashinyan during the war - while the government reassured the people that everything was in order, the Azerbaijani army liberated all of Karabakh. And when will the Armenian people wake up this time, when there will be no local bread on store shelves?