Mix of party policy and terror: bitter fate of politicians of Kurdish origin in Turkey - COMMENT HDP is less likely to gain success in 2019 presidential election 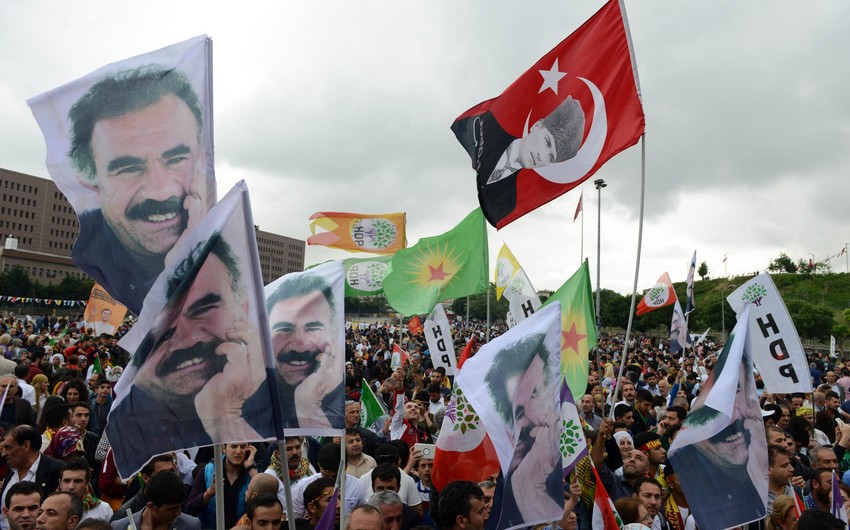 Baku. 12 January. REPORT.AZ/ The serious events that happen in society and human life create condition to tell the difference between white and black, true and false, bad and good. In this regard, great political, military events, financial-economic crises, looking back at the journey made by people involved in politics, serious thinking about the steps they take can be impetus for waking up from euphoria. It is also related to the head of states, parties, political and ideological leaders.

Some steps taken by politicians operating under the name of Kurdish ethnic group in Turkey in recent years can also be evaluated in this regard. The events that unfolded in Syria and Iraq shed light on several matters in the region. It was revealed who is who, who pursues which purpose and interests. This clarification process still continues. Even political parties operated in Turkey on behalf of Kurdish ethnic group.

What has recently happened in the Peoples' Democratic Party (HDP) made the issue more topical. The party congress is expected on February 11. The dispute erupted on social media between one of the leading figures of HDP Hasip Kaplan and Sırrı Süreyya Önder escalated tension in the party.

The co-chairman of this political organization Selahattin Demirtaş has been arrested under the articles of supporting terrorism, speaking out against Turkish state and government. He said he will not put his candidacy forward anymore. For this reason, till the congress the party leadership seeks to define a new candidate for co-chairmanship next week. Consensus Committee will be established related with candidates.

Osman Baydemir, lawmaker elected from Shanlıurfa and HDP’s spokesperson Ayhan Bilgen are among the candidates for co-chairs. With recommendation of Ahmet Türk, who is thought to be one of the invisible hands in the party, they are said to be brought to party management.

Ahmet Türk said that his health does not allow him to co-chair the party. He deemed that this position should be executed by young people. It is necessary to add that in 2005 with the court decision Ahmet Türk was banned to involve in politics.

However, the former lawmaker Hasip Kaplan from Shirnak region of Turkey spoke out against patronage of Ahmet Türk posted on social media:

“No Turk should set hopes on Demirtaş’s place in the congress of HDP. I humbly suggest: Everyone should know its bounds.”

As a response to that statement issued on behalf of the party, Hasip Kaplan called HDP leadership to focus on the reality. He said he resigns from party and not in politics anymore.

Hasip Kaplan is considered one of the decision makers at HDP. In 2001 and 2007 he was elected as lawmaker to the parliament from Shirnak. After 2011 election he joined Peace and Democracy Party in 2014 along with other lawmakers from this party he joined HDP.

For this reason, it can be assumed that due to recent developments HDP is less likely to restore its previous influence.

Lawmakers elected on June 7, 2015 could not form the government and parliament was dissolved. Repeat election was held on November 1, 2015. There was five month break between these elections. Here are the results of those elections:

On the parliamentary election that was held on June 7, the same year AKP gained 40.87% (258 seats), CHP 24,95 % (132 seats), MHP 16,29 % (80 seats), HDP 13,12 % (80 seats). As it is seen HDP lost 3% of votes during five months. Kurdish regional government in the north of Iraq at that time did not yet dare to hold referendum on independence violating the Iraqi constitution and all norms of international law. The referendum also proved that the fate of autonomous government depends on Turkey as it was before. For this reason, how can be the future of HDP that cooperated with terrorists PKK. The aim of PKK is to divide the Turkey. It means there are people in the HDP working for division of the state. The future of the parities that operated against Turkey in the past was not successful either.

Ahmet Türk was one of them. Later in the form of HEP and SHP coalition, the party was represented in the parliament with 18 lawmakers.

This alliance has ended as they were speaking out against the territorial integrity of Turkish state. On the ground of that, Freedom and Democracy Party was founded in 1992. This organization operated only a year. Democratic Party was set up in 1993. The party was represented in the parliament with lawmakers and a year later the party was closed for activity against Turkish state. Peoples' Democratic Party (HADEP) was established in 1994. As the party defended PKK and speaking against Turkey and its attributes, the party was closed in 2003 with court’s decision. Democratic People's Party (DEHAP) was founded in 1997. It was closed in 2002 with similar accusations.

Democratic Society Party (DTP) was founded in 2005 and Ahmet Türk become one of the co-chairmen of the party. The party was accused of division of Turkish society, undermining the territorial integrity of the country and closed in 2007. 221 members of the party including Ahmet Türk and Nurettin Demirtaş were banned to involve in the politics for the period of five years. HDP was founded in 2012 and is considered as left-wing political organization. The leaders of this party are accused of supporting terrorists PKK and terrorism.

Our purpose is not holding campaign against any ethnic group and deny its right. Simply we wanted to draw your attention to the game played over the last 27 years on behalf of one ethnic group. The developments in the Northern Iraq has also proved that the root of referendum idea is not related with any ethnic group but very far from the region, beyond the borders of the country.

The same referendum shows that HDP’s wings are not in Turkey but beyond the country. The same people taking advantage of democratic environment in Turkey rename the party and resume their activity. They help those who want to divide Turkey and make themselves a tool for making pressure on their country. If we express it in the language of famous law of mathematics “Though the names of those supporting terrorists change, the essence, role, function does not change”

Thus HDP is less like to achieve success in the presidential election to be held on November 3, 2019. But perhaps with suggestion of its foreign supporters new political organization might be founded to continue the previous activity on behalf of this ethnic group in Turkey.