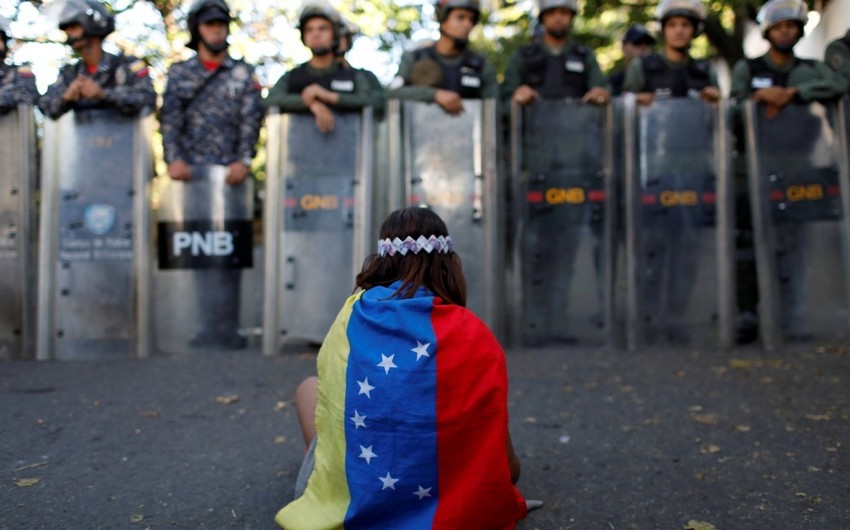 An authoritarian, dictator, and democrat also uses democracy as a tool for his personal goals. Head of all three sections speaks of the rule of law, the service to the state and the citizen. Authoritarians and dictators are trying to create an opinion that the security of the world depends on them. Surely, it also applies to those who use democracy as a tool and sell their weapons and who want to rob the wealth of the states. Such situations shrink the democracy created by humanity for managing it and turn it into more instruments.

By the way, goodwill to spread democracy around the world continue after the collapse of the Soviet Union. Unfortunately, this process is accompanied by more human casualties, refugee, illness and other social problems. Latin America has never been calm.The ideological confrontation that has taken place around the world in the past hundred years has also affected that continent.The USSR was a part of this confrontation. Then the happenings in Venezuela is the continuation of an incomplete conflict.

In the past, super powers were more openly opposed to each other. Today they are either stand behind the authorities in the states they want to protect or overthrow them. Just like in Near and Middle East. When evaluating situation in this part of the world, one can have a sympathy for one or another party. In terms of this, the events in Venezuela confirm what has been mentioned above.

Russia is a legal successor to the former USSR. It has chosen to return to the countries from where the Soviets were expelled. Russia, subjected to sanctions after annexing Crimea, has made its first such attempt in Syria. This gave Moscow some points in the international arena.The West, which does not expect Russia to be active in Syria, is now face to face with it in Venezuela.

Although today leftists in power in this country, now there is no Communist Soviet Union anymore. On the contrary, there is Russia, that wants to become more capitalist. It is not about ideology but about interests. There is no interest of democracy there. It is political and economic targets that turn the situation in Venezuela to similar in Syria. True, Moscow's attitude to the Caracas is more regional -political.

In fact, the Kremlin does not want the recurrence of 1973 Chilean coup d'état. In 1973 the leftist government of Salvador Allende was brutally overthrown in a U.S.-backed coup that left the president dead, followed by the rounding up, torture, killing, disappearance, and exile of thousands of Chileans over the next decades.

At that time, even the Chilean economy had hard times, elections won by Salvador Allende with 43 percent of the vote. This result did not please his competitors, and conservatives, nationalists, and Christian democrats united and created a coalition called "Democratic Coalition" against Alliance. In 1973 the differences between the opposition and the government deepened the current crisis. Chilean parliament chaired by Christian democrats and conservatives on August 22 adopted a bill entitled "The danger of Chilean democracy's collapse". The decision taken by the parliament indicates that Salvador Alain exploited the constitution and intended to form a dictatorship in the country. The parliament required the intervention of the army to resolve the existing problem and form a democratic government in Chile. Salvador Allende said that this bill, adopted in the parliament, is designed to undermine Chile's reputation in the world and create a conflict within the country.

As for the US position, the official Washington was dissatisfied with socialist Salvador Allier who came to power. His attempts to restore state control over copper industry then controlled by US companies have further irritated the White House. In a document prepared by the then Secretary of State Henry Kissinger for former US President Richard Nixon on November 5, 1970, Allende's reign of power was regarded as one of the biggest problems facing the southern hemisphere. For this reason, the US has begun to prepare secret plans to overthrow Allende. After the collapse of the USSR, a democratic regime was formed in Chile. Nevertheless, the bitterness, hate, and disaster of those years have not been forgotten.

Meanwhile, opposition dominates in parliament of Venezuela. The Constitutional Council has decided to extend the term of office of Nicolas Maduro. The opposition also opposed this step. President of the National Assembly of Venezuela Juan Guaidó is recognized as acting President of Venezuela by 54 governments, including the United States. Russia sends military aid to Venezuela at a time when the opposition leader is almost ready to seize power. Thus, the process dies down, Maduro begins to feel support.

By the way, after the collapse of the USSR, Russia, seems to have forgotten Nicaragua and Cuba. Although at one time it supported them in board terms. However, since the 2000s, Moscow began remembering Latin America and its people there.

Venezuelan President Hugo Chavez was more active in establishing this relationship. He visited Moscow twice in 2001, and in 2004, 2006 and 2007. Russia's then-President Dmitry Medvedev visited Caracas in 2008. The relations between the parties began to grow since then. However, the trade turnover between the two countries in the last nine months of 2018 amounted to $ 84.7 million.

This is 93.84 percent more than the corresponding period of 2017. During the reporting period, goods worth $ 83.9 million were exported from Russia to Venezuela, while imported goods valued at $ 800,000. In 2005, Russia's Gazprom won a tender for natural gas exploration and production in the Venezuela. Rosneft invested $ 6 billion in oil production in August 2017. Russia is one of the main suppliers of weapons and military equipment to Venezuela. In 2005-2017 Venezuela purchased arms and military equipment from Russia worth total of $ 11 billion. In 2015, the trade turnover between the two countries amounted to $ 23.9 billion.

Events in Venezuela show that Russia's struggle with the US is still ongoing. Undoubtedly, the United States is stronger in terms of power in all respects. Nevertheless, it does not want to repeat the mistakes made during the Soviet era. At that time, a US military fought with Soviet troops, directly in Vietnam, Afghanistan. Today US does not want its military to come face-to-face with Russian soldiers in any country. And for Russia it does not matter. In all cases Russia tries to restore the influence lost in the Soviet era. Taking advantage of current turmoil situation, it mediates in oil market. For example, it sells Venezuelan oil to India and so on. And Russia is trying to prevent the US from expanding along the western border of the political bloc or to extend. Venezuela is also a matter of influence for Russia. Just like Bashar al-Assad in Syria Russia is trying to keep Maduro in power. The Kremlin presents itself as an alternative to the US. Because there are still number of states expected to see change.