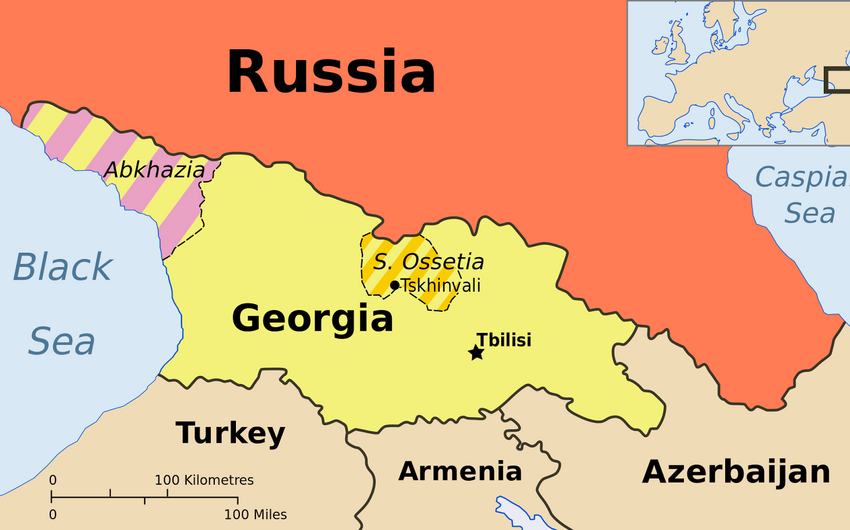 Baku. 28 October. REPORT.AZ/ Elections always reflect thoughts of various elements of society, political and social organizations, irrespective weather it was fair and free or not.

From this point of view, elections to the parliament of Georgia - our neighbor, strategical ally and friend - revealed thoughts of society and clarified number of issues. Integration with western countries, gaining more profit from economic projects, penetration of democracy, human rights, raising dominance of Georgian ethnicity, improvement of social conditions of citizens were among slogans voiced during election campaign.

As Azerbaijani proverb says we are the neighbors who “share fire”. Azerbaijani people are second after Georgians themselves who wish security, development, democratization and independence for this country. Because we “share our fire”.

Unfortunately, some candidates expressed opposite views during election campaign in Georgia.

It seems that some Georgian ethnic nationalists seem to forget main goal and issue.

26-27 years ago Azerbaijan and Georgia were struggling to restore their independence from Soviet Union and territorial integrity. During those years, Georgian nationalists mixed up goals and chose the line of hostility towards Azerbaijani Turks, which continued under Zviad Gamsakhurdia’s presidency.

Those who call themselves “patriots” in Georgia don’t seem to learn lessons from 2008 year August events. They chose to create problems for their country instead of cooperating with Turks (Azerbaijanis) who faces similar problems struggling for their territorial integrity.

We could not pay attention to thoughts of such people. However, we find it necessary to make comments on the issue as “Alliance of Patriots of Georgia” entered Georgian parliament as third largest group in the country with 5 percent of votes. Because it represents organized part of the Georgian society.

One of leaders of alliance Georgi Meglakelidze said in his electoral campaign that “Alliance of Patriots of Georgia” is strengthening in comparison with other ultranationalists in the words: “Multiculturalism is being destroyed. It is time for new views, from historical perspective, from perspective of integration to the world economy…”

Unlike other parliamentarian groups, “Alliance of Patriots of Georgia” being pro-Russian at the same time states that they don’t reject European Union (EU) and NATO membership: “Doors of NATO and EU are close for us now. The ball is in their court now and Georgia has nothing to do at this point. We don’t want to deceive people”. G.Meglakelidze told in his interview to EurasiaNet that his criticism related to NATO and EU aims at changing direction of unconditional respect of those in government to the West. According to him, government accepts everything come from US and EU unconditionally. “But now there is a new movement in Georgia”

The alliance says they are for social programs and improvement of health services and promises to support performers of Georgian national songs and dances: “The real patriotism is thinking, speaking and discussing with national spirit that is Georgian spirit. Georgian spirit is loyalty to country, faith in God, love for everything associated with Georgia, respect to Georgian language…”

The article of EurasiaNet correspondent Joshua Kuchera says: “Voters like Goderzdi Sheshelidze who spends most of his time in market and complains about low pension respond to calls of ultranationalists. He believes the government doesn’t keep its promises about development and they serve rather interests of western countries than Georgian people. He believes that ultranationalists will be different. Because their leader David Tarkhan-Mouravi is descendant of last Georgian king. According to him, lenience of government will split up the country: “Just like Russians occupied Abkhazia and South Ossetia, Azerbaijanis will occupy Marneuli, Armenians - Javakhetia and Turks – Adjara. What will be left for Georgia?”

Below words of Tarkhan-Mouravi were published in mass media: “Exceeding lenience of Georgian government will split the country. Azerbaijan wants to occupy Marneuli region anyway”. But the author rejects veracity of this statement and claims that Tarkhan-Mouravi didn’t tell it.

According to information spread by Freedom radio, Georgian political scientist Gela Vasadze analyzing post-election period in Georgia told that only one group in the parliament - "United National Movement" (UNM) will really oppose government. According to him, “Alliance of Patriots of Georgia” will be government’s mouthpiece.

“Bidzina Ivanishvili has interests in Russia. Kremlin as well as western powers can influence him. “Alliance of Patriots of Georgia” will voice unpopular marginal ideas and thoughts that cannot be stated openly by “Georgian Dream”.

According to him, “Alliance of Patriots of Georgia” claims to be young pro-western European style conservative movement: “But TV channel “Objective”, which is propagandist of the movement, became platform for pro-Russian politicians. Moreover, this movement is frequently blamed for xenophobia and nationalism”.

Let’s talk frankly: It is impossible to follow Euro-Atlantic political line and at the same time make xenophobe statements, launch anti-Turk propaganda, even express thoughts like “are Turks human, may be not so much”. They voiced even this.

Vasadze thinks that such statements can damage reputation of Georgia in other countries.

Thus, we agree with Vasadze. We think such statements and activities will cause damage to Georgia. So, friends who call themselves Georgian nationalist and talk about interests of this ethnic group - megaboro, katso, be careful, it is not time for you to lose friends.