Experts: Sargsyan's statement is designed for domestic consumers - OPINION "Sargsyan's policy is banal desire to distract attention of the Armenian community from the deteriorating of socio-economic situation"
227 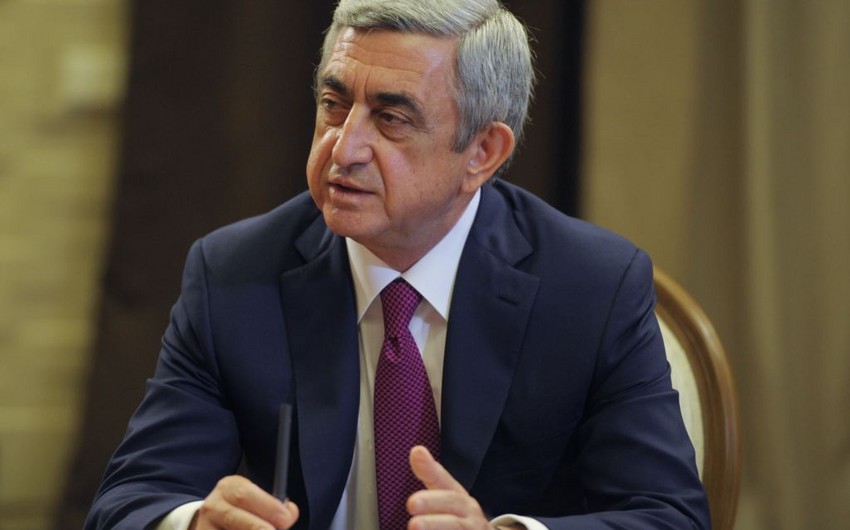 Baku. 28 September. REPORT.AZ/ Statement of Armenian President, Serzh Sargsyan on the sidelines of UN General Assembly in New York that is an integral part of Armenia, is designed for domestic consumers, and aim to distract attention of the Armenian community from the deteriorating of socio-economic situation, experts say.

"In the new conditions, Armenia just gave up from its positions. Azerbaijan in regional and global game drove Armenia into a deadlock. And now in complete stagnation, when Yerevan unable to maneuver once again, this country resorted to the waste of resources", Report was told by the political analyst, Tofig Abbasov.

According to him, Sargsyan just decided to play the "old cards".

"Hopelessness of the official Yerevan makes it to shuffle the marked cards. In fact, Sargsyan sang an old song about the old. It started with the slogan "miatsum", that's to say, with the reunification of Karabakh with Armenia when no one could imagine in Yerevan that, the Soviet Union would collapse and Azerbaijan and Armenia will be the sovereign entities, and the conflict which began between them durng the Soviet Union will move into a completely new geopolitical plane", said the expert.

He stressed that, regardless Sargsyan's statement, Nagorno-Karabakh will certainly come back to Azerbaijan. "And the starting point was and remains the withdrawal of the occupation of Armenian forces from Azerbaijani territories", said the analyst.

According to him, the statement of Armenian president is designed on domestic opponents and this kind of populist statements absolutely have no impression on Azerbaijan.

"It will not be surprise, if tomorrow Sargsyan will proclaim so-called "NKR" the part of the Brazilian state of Sao Paulo, where compactly live about 30 thousand Armenians. And even in this case, Baku will not abandon the demands to leave other people's territories and sit down at the negotiating table. Doing so clumsy gestures, official Yerevan does nothing, exacerbating their painful condition", concluded the analyst.

In turn, political analyst Ilgar Velizadeh believes that, the statement about belonging of Nagorno-Karabakh to Armenia, sounded by Sargsyan is a carefully thought-out provocation in order to negate any possible agreement on Nagorno-Karabakh conflict, which recently agreed upon under the formats of Baku-Moscow and Moscow-Yerevan relations.

"On the other hand, this statement, which made on the day of the meeting of foreign ministers in New York, actually deprives the basis of the current negotiation process in the broader framework of the OSCE Minsk Group. And, finally, on the eve of his participation in the UN General Assembly of Armenia, creates a background for to be able to come down to the accusations against the Azerbaijani side, which is already gave strict respond to this statement", said the analyst.