​Experts comment on causes of Assad's visit to Russia - OPINION 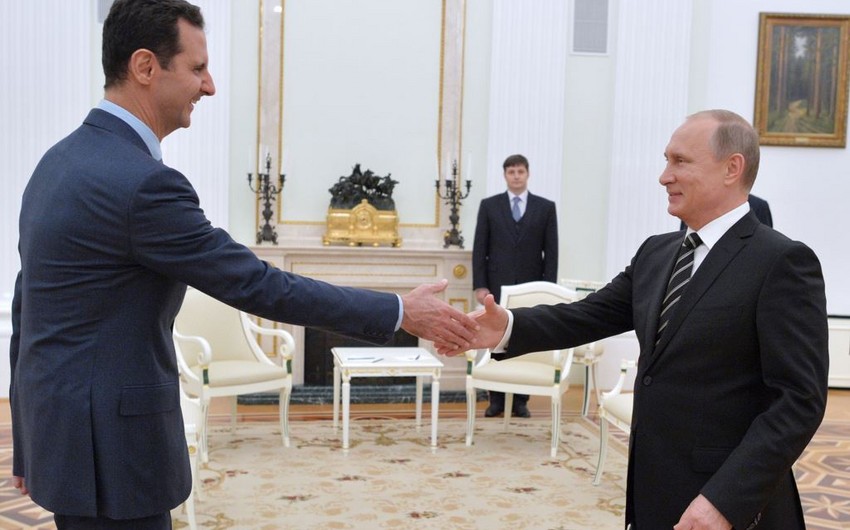 Baku. 21 October. REPORT.AZ/ Experts say that, one of the topics raised at the meeting of the presidents of Russia and Syria could become a question of the future political configuration of Syria after end of hostilities.

"The visit of Bashar al-Assad to Moscow was needed for several reasons. First of all, the Russian and the world community had to hear directly from the President of Syria that the Russian strikes on radicals have high efficiency, and that official Damascus is particularly grateful for this. It is also necessary to correct the future prospects, taking into account that the US had expressed its clear position on Moscow's proposal on joint coalition", Report was told by the chairman of the Expert Council "Workshop of Eurasian ideas" Gregoriy Trofimchuk.

The expert believes that the inability to interact with the West dictates the need for urgent search for other variants of the coalition, led by Russia.

"Also the fact that Assad got an official visit abroad for the first time after the war, also aims to tell the world about alleviating of the situation in the country", said chairman of the board.

In turn, a political analyst Ilgar Velizade believes that the purpose of Bashar al-Assad's visit to Moscow was to convince the Russian leadership to continue the participation of the Russian Armed Forces in military operations in Syria.

"Apparently, Assad is counting on more and wants to save Russia's military participation at least until a decisive and irrevocable turning point of the military campaign in his favor. He is still very weak to stand alone against ISIS and the Free Syrian Army," said the expert.

Report was told by the arabist of Higher School of Economics Leonid Isayev, that there are three important points that should be mentioned in the visit of Syrian President to Moscow.

"First, it is a signal to Syrians, because the Syrian society is in completely negative and low morale state now. The level of hopelessness in society has grown, and there is a high level of migration", stressed Isayev.

According to him, the visit aimed to demonstarte Syrians, that first of all Russia would remain the main ally of Syria, and which would support the Assad regime up to the end.

"Secondly, I think that this visit is also intended for the West in the context of the fact that Russia still takes its position on Syria and President Bashar al-Assad, and they associate the future of Syria with him," said the arabist.

Expert called the future political configuration of the Syrian state as a third point of discussion.

"There are different views on how Syria should maintain political process. The fight against terrorism has not come to an end, so I think, there is a need to coordinate their positions. Bashar al-Assad recently declared that he was ready to resign as president of Syria for some conditions, so Moscow has certainly great responsibility here. In addition, in order to develop a common position that would suit both Syria and Russia, and also Russian allies, and could be acceptable for Moscow's partners in the West and countries in the Arabian monarchies, so Russia has to offer some model of ending of the Syrian conflict, which would not cause rejection of the western Russian colleagues ", summed Isayev.