Both Azerbaijan and Turkey will benefit from STAR refinery - OPINION

Both Azerbaijan and Turkey will benefit from STAR refinery - OPINION Baku. 19 October. REPORT.AZ/ As reported, the opening ceremony of the STAR Oil Refinery (SOCAR Turkey Aegean Refinery) of the State Oil Company of Azerbaijan (SOCAR) is being held in Aliaga, Izmir, Turkey. The total cost of the project, which is planned to process 10 million tonnes of crude oil per year, is $6.3 billion.
2850 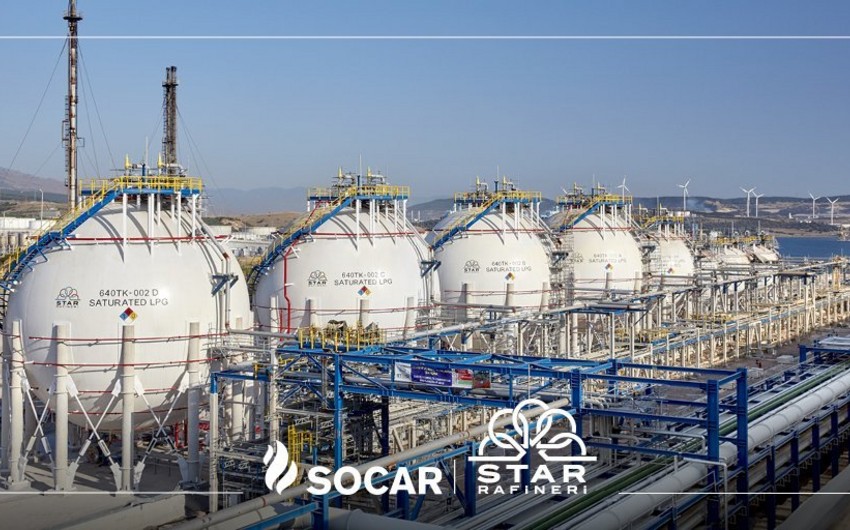 Baku. 19 October. REPORT.AZ/ As reported, the opening ceremony of the STAR Oil Refinery (SOCAR Turkey Aegean Refinery) of the State Oil Company of Azerbaijan (SOCAR) is being held in Aliaga, Izmir, Turkey. The total cost of the project, which is planned to process 10 million tonnes of crude oil per year, is $6.3 billion.

The foundation of the STAR Oil Refinery was laid down by Azerbaijani President Ilham Aliyev and Turkish President Recep Tayyip Erdogan on October 25, 2011. The refinery was constructed by a consortium comprising “Técnicas Reunidas” (Spain), “Saipem” (Italy), “GS Engineering & Construction Corp” (South Korea) and “Itochu” (Japan). The related contract was signed on May 20, 2013.

What will Azerbaijan and Turkey get from this project?

STAR Refinery is the first oil refinery plant constructed by SOCAR outside Azerbaijan. This is one of the company’s projects abroad aiming to diversify SOCAR’s business portfolio.

Energy expert, Doctor of Philosophy Emin Akhundzade told Report that $852 million is forecasted to come from the refinery in the first five years, $613 million in the next ten years. According to him, this, in turn, will contribute to Azerbaijan’s economy and provide flow of foreign currency into the country.

The plant will carry out the processing of such oil grades as Azeri Light, Kerkuk and Urals. On August 3, the Absheron tanker delivered 80,000 tonnes of AzeriLight crude oil to STAR for processing. The plant will start operating at high capacity in January 2019.

According to the contract signed with Russia’s Rosneft in September, starting December, 1 million tonnes of Russian oil will be supplied to STAR during a year.

“SOCAR Trading”, STAR, “Petkim” and “Petlim” will ensure optimization of SOCAR’s revenues by creating strong synergy. And this will bring billions of profit to Azerbaijan’s economy in the future. This means that the total benefit of the project will be felt more in fact."

Akhundzade reminded that the crude oil to be processed at the plant will be supplied by SOCAR Trading.

Akhundzade noted that STAR project will also have positive impact on Petkim’s revenues.

“Petkim’s main need for naphtha will be supplied by STAR. So, Petkim’s dependence on import and transport costs will be eliminated and it will increase its competitive in the market through cheaper raw material. This will naturally have a positive impact on Petkim’s revenues,” the expert said.

Director of Energy Markets and Policies Institute of Turkey (EPPEN) Volkan Ozdemir told Report that one of the greatest benefits of STAR is that it will supply raw material to Petkim: “As Tüpraş cannot produce naphtha, Petkim used to import this product. After STAR begins production, Petkim will not import naphtha anymore and will buy directly from the plant.”

“As Tüpraş cannot produce naphtha, Petkim used to import this product. After STAR begins production, Petkim will not import naphtha anymore and will buy directly from the plant.”

He also noted that STAR refinery became the first investment in heavy industry in Turkey after a long time and is therefore very important.

STAR is planned to produce 1.6 million tonnes of naphtha per year. Currently, naphtha is fully imported for Petkim. After launch of STAR, it will directly be bought from STAR via pipeline.

Management of Petkim Holding also said that STAR’s activity will bring $100 million in extra income per year. Of this, $60 million will come from logistics advantages, $40 million from joint services and joint infrastructure.

STAR is the biggest investment of private sector in the history of Turkey, the first oil refinery in the country. Along with supplying raw materials to Petkim, the refinery will meet a part of demand of Turkey’s market for diesel and aircraft fuel, contribute to reduction in the current deficit by $1.5 billion per year. The plant will meet more than 25% of the Turkey’s demand for oil products.

STAR-produced products will be used to reduce Turkey’s import.

According to him, there is a lack of petrochemical enterprises and refineries in Turkey and SOCAR’s plant will contribute to Turkey’s import: “Therefore, STAR Refinery represents a strategic importance for Turkey. Turkey’s deficit in foreign trade is high and major part of this deficit is related to energy import.”

He said that Turkey works on production of imported products: “STAR’s products will ensure reduction in Turkey’s import and keep currency in the country. This project will also morally support Turkey, which is going through a difficult time in economic terms, facing inflation associated with the exchange rate in the recent times.”

STAR Refinery represents a strategic importance for Turkey. Turkey’s deficit in foreign trade is high and major part of this deficit is related to energy import.”

10.5 million tonnes of previous year’s consumption was met by domestic production, 13 million tonnes – by import. This means that more than 50% of diesel was imported last year. STAR will reduce the import below to 40%.

Turkey consumes 3.7 million tonnes of LPG per year and 80% of this product is imported. After launch of STAR Refinery, the import will reduce to 70%. Taking these into account, STAR is forecasted to reduce current deficit in Turkey’s foreign trade balance by $1.5 billion.

The plant will also play an important role in terms of increase in employment rate. During the construction, the number of employees has reached 19,500. Once the refinery is launched, 1,100 people will work here.

The longest term credit of the real sector

In June 2014, SOCAR Turkey Energy signed loan agreements with 23 commercial banks on funding of STAR construction. This is the biggest and longest-term financing agreement of Turkey.  $3.3 billion of the total cost of $6.3 billion was carried out through loans and the remaining through domestic sources. The project has won awards of the “Best Project Financing of the Year”, “Best import financing”

STAR Refinery will further strengthen friendship between Turkey and Azerbaijan

Official of the Turkish Ministry of Energy and Natural Resources Emre Ozgur said that STAR Refinery will contribute to development of energy and oil sector in Turkey, as well as further strengthen fraternity and friendship between Turkey and Azerbaijan.