Barcelona terror attack: terrorists spread seeds of hostility - COMMENT They are tools in the hands of those who want to reach their malicious goals
2079 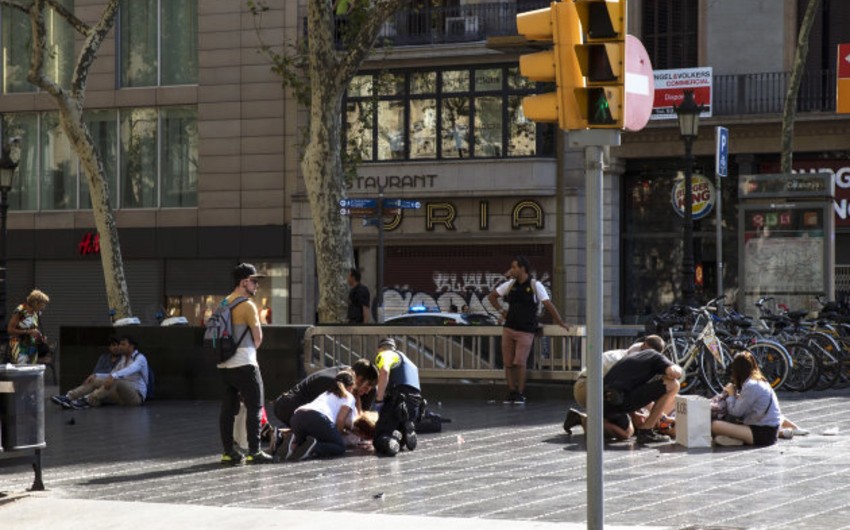 Baku. 18 August. REPORT.AZ/ Spain’s Barcelona city is mainly famous for its namesake football club. However, yesterday, a tragedy took place there as well.

A terror attack has been committed in the territory of the European Union which is an example for the world’s leading, developed nations and countries, the rights of its citizens are protected more than anywhere else in the world, the security of which is ensured at a high level and the Kingdom of Spain, one of the most developed countries of the world. On August 17, two terror attacks were committed in Spain’s Barcelona city of the Catalan province and its neighborhood Cambrils city. As a result of the first terror attack, 14 people have lost their lives; 119 people have been injured. In the second terror attack, 5 people have been wounded, two of them have been severely injured.

As a result of the anti-terror operation, 4 terrorists have been killed. ISIS has claimed responsibility for the attack.

The Spanish government has declared a three-day mourning in the country. On August 18, the memory of the victims was honored with a minute of silence.

Violence is condemned by humanity. Terror is the most hated act. As a result of this bloody tragedy, civilians, including children, women and elderly people, die. Therefore, it deserves to be cursed.

In this tragedy, damage has been caused to nearly 100 families from 23 countries. It shows that no countries or individuals are secured from terror.

Fight against terror has turned into a global struggle, as terror endangers the future of the planet which is our common home. Every resident of the house should be ready for this fight.

Therefore, such a question naturally arises. Why have terrorists chosen Barcelona?

There are forces in this Spanish province that want the independence of Catalonia. ETA (“Euzkadi ta azkatasuna” – “Motherland and Independence”) has committed terror attacks and taken up arms for a long time to achieve this goal.

A day before the incident, on August 16, the Catalan National Assembly circulated information about submitting the promotion plan under the title of “Say “Yes” to the Independence Referendum”. This campaign will start in one month. On August 12, thousands of people took to San-Sebastian and held a demonstration in support of the independence of Catalonia and Basks’ country.

Notably, the referendum is planned to be held on October 1 this year.

The issue of Basks country’s independence has been on the agenda for several years. For this reason, the ETA group, representing Basks, declared the end of the armed fight in 2011.

In the same year, they called the French and Spanish governments to launch direct negotiations to end the armed struggle and resolve the conflict. Then, Spanish Prime Minister Jose Luis Rodriguez Zapatero assessed the end of the armed fight as “the victory of democracy, law and sanity”.

At that time, Mariano Rajoy noted that the Spanish people will be relieved after ETA is disarmed and disbanded.

In April of this year, ETA announced that it had handed over all the remained ammunitions.

By the way, this armed group was founded in 1959 during Franco’s dictatorship by Bask students in the north of Spain and in the south-west of France with the aim to build an independent Bask state. Throughout its activity, the group committed numerous terror attacks. They claimed lives of plenty of people.

Along with it, unlike Catalonians, the government of the Basks country has partially supported the idea of separation from Spain.

Thus, terrorists have targeted Spain’s weakest point – Catalonia. They have attempted to blackmail official Madrid this way. In other words, the Catalonians, who are planning to hold an independence referendum, may also suspect Spain in this terror attack. As a result, demonstrations might occur in the Kingdom. Therefore, separatists supporting terror to reach their goal and their patrons should draw conclusions from such tragedies. Such separatist organizations operate in some countries of Europe.

Unfortunately, the approach to terrorist groups is not one sided. The terrorism activity of Armenia, that keeps the Azerbaijani territories under control, the PKK terrorist group and its different branches, trying to violate Turkey’s territorial integrity, are backed by Western countries and Russia. For this very reason, those, who have committed a terror attack in Catalonia’s central city Barcelona, may also carry out similar acts in the northern autonomous region of Iraq, which wants to hold a referendum in autumn, Transnistria, the east of Ukraine, as well as Crimea and the territories where Georgia has lost its control, with the aim to aggravate the situation, spread seeds of hostility and cause unrest.

Nevertheless, in case such acts are committed, the central governments will not hold responsibility for them. Those, who have supported armed separatists and equipped them with ammunitions, shown support for them and provided them with asylum, are responsible for such terror attacks. The terrorists, who have committed a bloody tragedy in Barcelona, are just tools in the hands of those who want to reach their malicious goals. In this term, none of them can be good. Therefore, we condemn all of them.

Bu the way, this is not the first failure of Barcelona throughout this week. On August 16, not Barcelona FC, but the King’s club Real Madrid grabbed the Spanish Super Cup.