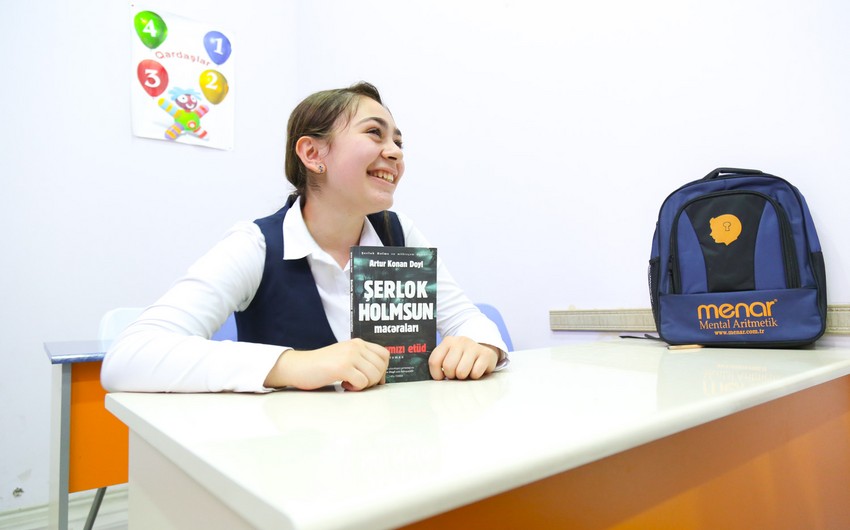 Baku. 14 October. REPORT.AZ/ Azerbaijani teenage can read over 25 000 words in a minute. 8th grader Fatima Zulfugarli, who trains on speed reading at one of the educational centers in Baku may set a new world record.

F.Zulfugarli told Report that decided to realize such an idea after watching 12-year-old Tarık Yiğit reading 11 725 words in a minute on one of the Turkish telecasts: "I thought that if I try, I will also beat record and so, set a goal to renew his record. I have tried and succeeded. Mainly, my mother supported me, however, my father and brother did not believe in it. But later they also believed".

She noted that earlier she was trying at home, but reading a lot caused eye pain: "Here, the teacher has taught speed reading tactics. Speed reading helps me at school, too. My class-mates also didn't believed me. Then they gave me a book and measured time. Then they calculated the words read within a minute and asked me to tell the text. After i told the text, they believed in it".

F.Zulfugarli noted that she hasn't determined yet what profession to choose in the future: "Earlier, I wanted to become a lawyer, then a computer engineer, and now I want to work in the oil field. There is enough time to make a choice."

In the meeting with her, we asked her to read the book, which we chose in order to be eye witness. Fatima read 34 pages in a minute and then told us the story.

Her teacher Jamila Guliyeva told Report that speed reading is being implemented in Azerbaijan for 4 years: "Continuation of the program is 3 months, which is carried out through special eye trainings and techniques. We have been trained with Fatima since summer break. The eye exercises of this program improve vision."

According to her, a child must be at least 7 years old to be involved in speed reading.

Notably, the first record on speed reading was broken by young American, who was able to read 6 000 words in a minute. However, last year 12-year-old Turkish citizen Tarık Yiğit renewed the record and even set a new one.