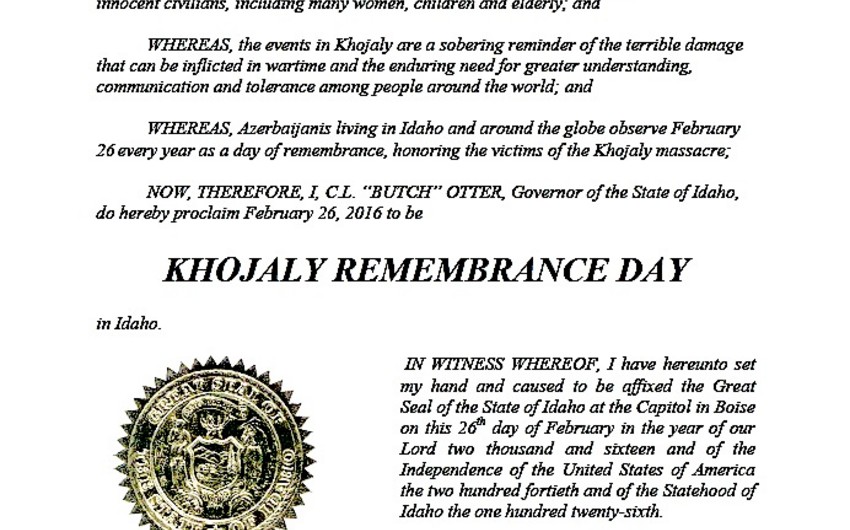 Khojaly was a town in Azerbaijan’s Karabakh region. In February 1992, Armenia’s armed forces attacked the town, killing 613 Azerbaijani civilians, including some 300 children, women and elderly. The Human Rights Watch called the massacre “the largest massacre in the [Karabakh] conflict.”

The proclamation, which has been received by the Consulate General of Azerbaijan in Los Angeles, notes that “on February 25-26, 1992, the population of Khojaly was subjected to a massacre, resulting in the deaths of more than 600 innocent civilians, including many women, children and elderly”.

The document states that “the events in Khojaly are a sobering reminder of the terrible damage that can be inflicted in wartime and the enduring need for greater understanding, communication, and tolerance among people around the world”.

Stating that “Azerbaijanis living in Idaho and around the globe observe February 26 every year as a day of remembrance, honoring the victims of the Khojaly massacre”, Governor Otter proclaims February 26, 2016 to be the “Khojaly Remembrance Day” in Idaho.

The proclamation was co-signed by Lawerence Denney, the Secretary of the State of Idaho.

This is the first official document on the Khojaly massacre issued in Idaho.

Thus, Idaho became the 21st State in the United States to recognize the Khojaly massacre and honor its innocent victims.