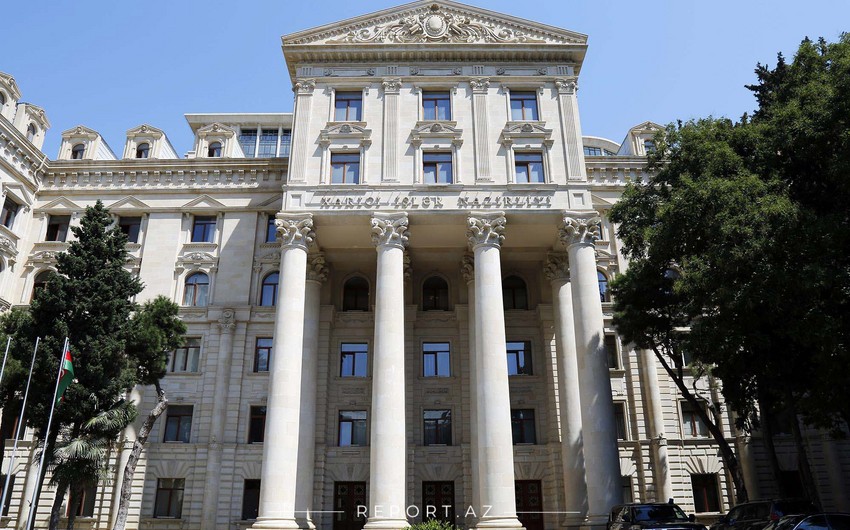 February 26, 2021, marks the 29th anniversary of the Khojaly genocide committed by Armenia's armed forces during the Armenian aggression against Azerbaijan.

"One of the gravest crimes committed against the civilian population during the decades of Armenian aggression against Azerbaijan and the most tragic page of the First Karabakh War was the occupation of the city of Khojaly. Before the conflict, 7,000 people were living in this town located in the Nagorno-Karabakh region of Azerbaijan. From October 1991, the city was surrounded by the armed forces of Armenia. Over the night of the 25 to February 26, 1992, following the massive artillery bombardment of Khojaly, Armenia's armed forces, with the help of the infantry guards regiment No.366 of the former USSR, seized Khojaly. Invaders destroyed Khojaly and, with particular brutality, implemented carnage over its peaceful population.

"As a result of the Khojaly genocide, 5379 inhabitants of the city were forcefully expelled, 1275 were captured and taken hostage (the fate of 150 of them, including 68 women and 26 children, remains unknown to date) and were tortured, 487 were injured, eight families were annihilated, 130 children lost one, and 25 children lost both parents, 613 people, including 63 children, 106 women and 70 elderly people were brutally murdered.

"All the existing facts of the tragic events in Khojaly prove that the crimes committed in this city of Azerbaijan were not ordinary and accidental acts but an integral part of Armenia's systematic violence policy. The targeted massacre of civilians in Khojaly was a crime stemming from a policy of ethnic hatred and racial discrimination against Azerbaijanis at the state level in Armenia. It aimed at massacring people simply because of their ethnicity.

"At present, the national legislative bodies of 17 countries and 23 states of the USA have adopted resolutions and decisions condemning the massacre against civilians in Khojaly and assessing it as a crime against humanity. Moreover, the Organization of Islamic Cooperation and the Cooperation Council of Turkic Speaking States have adopted resolutions and statements strongly condemning the Khojaly genocide.

In its judgment of April 22, 2010, the European Court of Human Rights arrived at an essential conclusion concerning the crime committed in Khojaly, qualifying the behavior of those carrying out the incursion as 'acts of particular gravity which may amount to war crimes or crimes against humanity.'

"Alongside the Republic of Armenia's responsibility as a State for internationally wrongful acts, under the customary and treaty norms of international criminal law, certain acts perpetrated in the context of an armed conflict, including those in the town of Khojaly, are viewed as international criminal offenses and responsibility for them is borne on an individual basis by those who participated in the said acts, their accomplices and accessories. However, until today, none of those directly involved in the Khojaly tragedy and other related crimes such as war crimes and crimes against humanity has been prosecuted in Armenia.

"In his cynical admission of culpability, Armenia's then Defence Minister and ex-President, Serzh Sargsyan, was quoted by the British journalist Thomas de Waal, as saying, 'before Khojali, the Azerbaijanis thought that ... the Armenians were people who could not raise their hand against the civilian population. We were able to break that [stereotype]' (Thomas de Waal, Black Garden: Armenia and Azerbaijan through Peace and War (New York and London, New York University Press, 2003), p. 172).

"Purposeful targeting of the Azerbaijani civilian population and crimes against humanity against them were continued during military operations conducted by Armenia from September 27 to November 10, 2020. Armenia, deliberately targeting the civilian population and civilian infrastructure of such Azerbaijani cities as Ganja, Barda, Terter, located at a considerable distance from the war zone, in 2020, as in 1992, resorted to the same terror tactics, and this time already with the use of modern types of armored vehicles and rocket launchers, which led to the massacres of peaceful Azerbaijanis. Both the Khojaly genocide in 1992 and the bombing of the civilian population in 2020 demonstrate Armenia's purposeful policy of violence against Azerbaijanis.

"The Republic of Azerbaijan believes that continuous measures taken at the national level and within the framework of existing international law will serve to end impunity and bring to justice those responsible for serious crimes committed during Armenia's aggression against Azerbaijan."