Is France trying to turn Armenia into outpost in Transcaucasia?

Is France trying to turn Armenia into outpost in Transcaucasia? According to some reports, diplomats from France and Armenia are holding intensive meetings in Yerevan, Paris, and New York. 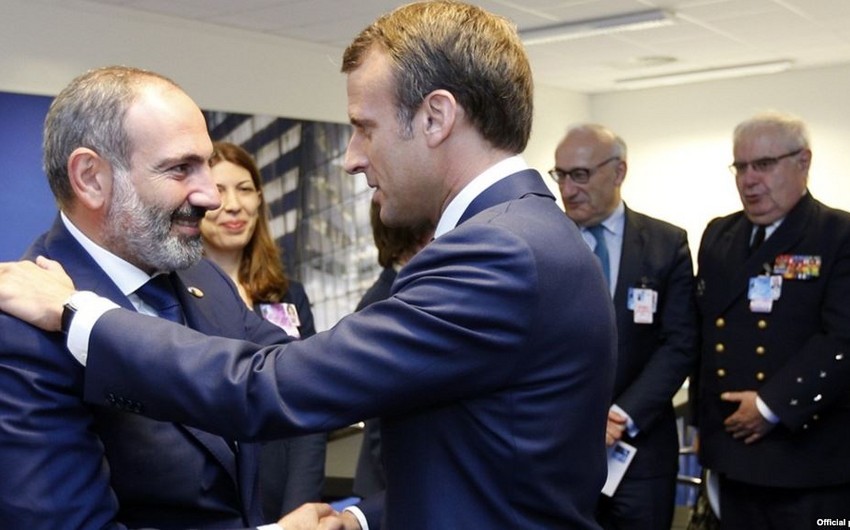 According to some reports, diplomats from France and Armenia are holding intensive meetings in Yerevan, Paris, and New York, where the UN headquarters is located, trying to delegitimize the trilateral ceasefire declaration concluded on November 9, 2020. The agreement that stopped the Karabakh war was signed by Azerbaijani President Ilham Aliyev, Russian President Vladimir Putin, and Armenian Prime Minister Nikol Pashinyan.

informs, citing Russian newspaper (MK), that one of the three parties that signed the document may have other interests today.

"According to our source close to the diplomatic environment, French President Emmanuel Macron and Nikol Pashinyan are considering the possibility of adopting a new plan proposing a revision of the previous UN Security Council resolution on the situation in Karabakh. Let's be honest, if this information turns out to be accurate, in the future, such a step may have severe consequences for the entire world politics.

Perhaps Paris, by achieving a new UN Security Council resolution, wants to create a status quo, where it will play first fiddle. Further, according to this project, not only the introduction of French troops into the South Caucasus and their deployment along the Armenian-Azerbaijani border, but also entry into Karabakh is being considered. It's not hard to predict what might happen next. And would not other EU states want to follow the descendants of the Napoleonic soldiers there? By the way, Nikol Pashinyan was the first to talk about ​​foreign intervention in Armenia, and he repeated this idea during his meeting with Charles Michel on July 17, 2021. It is worth noting that Charles Michel is Macron's protégé, as he owes his position in the European Union to the French president. It should also be noted that the Michel-Macron-Nikol Pashinyan trio is a kind of "alliance of populists." It is possible that in this way, France wants to turn Armenia into its own geopolitical outpost in the Transcaucasian region.

France's ambitions are understandable. Seemingly, the November outcome of the Karabakh war and the tripartite agreement concluded, largely thanks to the efforts of Vladimir Putin, did not satisfy Macron's claims. And all that is happening now is just an attempt to return to the region and gain a foothold.

It is clear that Russian diplomacy should not doze. As a permanent member of the UN Security Council, Russia has the right to veto any resolutions, especially those that may in one way or another affect its own interests.

It is clear that in this big game, the Armenian prime minister can only serve as a sacrificial pawn of big politics. And we know how the main pieces deal with such pawns in the end," the MK article reads.