Ilham Aliyev and Mehriban Aliyeva attend opening of Khari Bulbul festival in Shusha Shusha, the cultural capital of Azerbaijan is hosting the Khari Bulbul music festival. After 29 years, Shusha, the cradle of ancient culture, welcomes its natives and guests again. 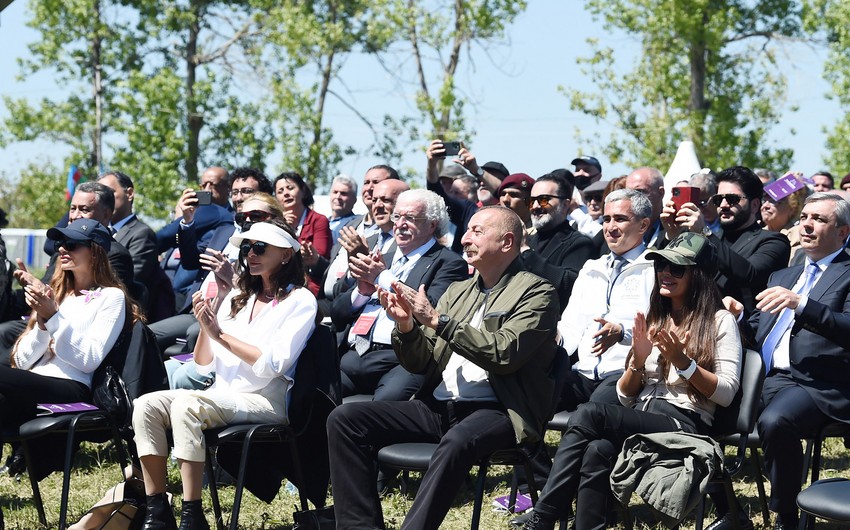 Shusha, the cultural capital of Azerbaijan is hosting the Khari Bulbul music festival. After 29 years, Shusha, the cradle of ancient culture, welcomes its natives and guests again.

The head of state made an opening speech at the festival.

- Dear friends, it is a significant day in the history of our country today. After a long break, the Khari Bulbul festival is being held in the Jidir Duzu (plain) in Shusha, a city sacred to each of us. I heartily congratulate you and all the people of Azerbaijan on this occasion.
We have been looking forward to this day for 30 years. We have lived with a longing for Motherland for 30 years. We had to reconcile with this injustice for 30 years, but we did not put up with it. We were always saying that we would never come to terms with this situation and that we would liberate our native lands from the occupiers at any cost, and we did exactly that. Khari Bulbul music festival, being held this year for the first time after a long break, is dedicated to the memory of our martyrs. We are indebted to our heroic soldiers. We are indebted to the people of Azerbaijan. Our people united like a fist and showed solidarity and the people of Azerbaijan won this victory. This is a victory for all of us. I would request that we commemorate our heroic martyrs of the Patriotic War with a minute of silence.

May Allah rest the souls of all our martyrs in peace!

We have restored this remarkable tradition, and the Khari Bulbul festival will now be held in Shusha every year. This year's festival covers representatives of the peoples living in Azerbaijan. Representatives of different nations living in our country will perform at this festival. I gave this recommendation to the Heydar Aliyev Foundation, the organizer of the festival because all the peoples living in Azerbaijan have contributed a great deal to the Patriotic War. The Patriotic War has once again shown that all peoples in Azerbaijan live in friendship, brotherhood, and solidarity, and this 44-day war showed again that there is national unity and national solidarity in our country. It is no coincidence that the first festival will feature representatives of the peoples living in Azerbaijan. So we are sending another message to the whole world from here, from Shusha, from our ancient land. Countries should develop in this way, in multi-religious, multi-ethnic countries and societies. There is development, there is unity, there is national solidarity, there is peace here. We follow what is happening in different parts of the world, and I can say that we could foresee the present-day situation a few years ago. Therefore, we promoted multiculturalism, promoted the coexistence of different peoples both domestically and internationally, including through numerous events held in our country. We were saying that this was possible. We were saying in the example of Azerbaijan that it was possible, we were showing that we shared our experience, we shared our views, and I think that our efforts have paid off because the world has a clearer picture of this issue now.

The 44-day war resulted in a complete victory for Azerbaijan. Azerbaijan won a complete victory, expelled the invaders from ancient Azerbaijani lands, and raised the Azerbaijani flag in all liberated lands. The 44-day war is our glorious history. Every day of the 44 days represents a heroic saga. Every day we gave martyrs, shed blood and yet we moved forward. Every day we moved forward. There was not a single day in the 44 days on which we would take a step back. We only moved forward, giving martyrs and shedding blood. Our people were and we united, and this conditioned this Victory. More than 300 towns and villages were liberated from the invaders on the battlefield, and the liberation of Shusha, the impregnable fortress, is a separate heroic saga. Everyone visiting Shusha and Azerbaijani citizens who have already come to Shusha can confirm that liberating it from occupation required great heroism, courage, and self-sacrifice. Our heroic soldiers climbed these steep rocks and liberated Shusha from the invaders in a hand-to-hand battle although the occupiers fired at us from tanks and artillery. We gave martyrs in the battles for Shusha. But the national spirit that drove us forward secured this victory. The liberation of Shusha meant the collapse of the Armenian army and the Armenian state. Because a day later, Armenia was forced to sign an act of capitulation, which was drafted in accordance with our conditions, and we returned Lachin, Kalbajar, and Aghdam districts without firing a single shot. It is no coincidence that the day of the liberation of Shusha, 8 November, was declared an official public holiday in Azerbaijan, it was declared Victory Day, and we will celebrate this holiday every year.

Shusha is a national treasure of the Azerbaijani people. The recent announcement of Shusha as the cultural capital of Azerbaijan shows this again. Shusha is an ancient Azerbaijani city. Next year we will celebrate the 270th anniversary of Shusha. Panahali Khan founded Shusha in 1752, and from that time until the occupation, Azerbaijanis always lived in this city. Hard as the Armenians tried, they could not erase the Azerbaijani spirit from Shusha. Yes, the loathsome enemy destroyed our buildings, our mosques, our historical monuments. However, Shusha was able to preserve its Azerbaijani spirit. Shusha was in captivity for 28 and a half years, but it did not bend, did not break, preserved its dignity, protected its national spirit, protected the spirit of Azerbaijan.

Dear friends, I am sure that many of you are here for the first time since the occupation. You can see and feel that. This is my third time in Shusha, and every time I come here I say that I want to stay. I do not want to leave here. Shusha has a unique aura. I have never seen a city like Shusha elsewhere in the world. There probably isn’t one. We are gathered in free Shusha after a long break today. Azerbaijani mugham will be performed on the Jidir Duzu (plain) today. After a long break, we will celebrate this wonderful music holiday in Shusha. It is a music holiday in the true sense of the word. Yes, we did return to Shusha on 8 November by fighting and shedding blood, but Azerbaijani culture, prominent representatives of Azerbaijani culture have returned to Shusha today, and this return is a reality, and everyone must reckon with this reality.

From now on, we will live in Shusha forever. The restoration of Shusha has already begun. The instructions are being fulfilled. The Yukhari Govhar Agha mosque has already been repaired and holiday prayer will be performed there tomorrow.

It is no coincidence that the festival has been organized on the eve of Ramadan. We are a nation bound by our religious, national, and spiritual roots. Otherwise, we would never have been able to end the occupation. For all these years, we have lived with one goal – to liberate our lands, restore justice, protect our national dignity, and we have achieved this. Today's event shows again that we have returned to Shusha and will live here forever. Restoration work has begun in the city and, as I already said, the Yukhari Govhar Agha mosque has been repaired. Five years ago, after the liberation of Jojug Marjanli, I had a mosque similar to the Shusha mosque build there. I said at the opening of the mosque back then that one day we would restore mosques in Shusha, we would build new mosques. Today, on the eve of Ramadan, the foundation of a new magnificent mosque was laid in Shusha. The “Khan gizi Natavan” spring, which was once dried up by the Armenians, now abounds in water. All this has a great symbolic meaning. This is our return. We will build and restore Shusha, while the contemptible enemy has destroyed Shusha. Those here, our friends will walk around and see the ruins Shusha has suffered. But let me say again that we kept Shusha, Aghdam, Jabrayil, Fuzuli, Zangilan, Gubadli, Lachin, Kalbajar in our hearts. We will restore the destroyed mosques, but we had built those mosques in our hearts during the occupation. And we are gathered here now, on the Jidir Duzu (plain), a place sacred to every Azerbaijani, and celebrate this holiday of music, this holiday of unity, this holiday of return, this holiday of dignity. Long live Shusha! Long live Karabakh! Long live Azerbaijan!