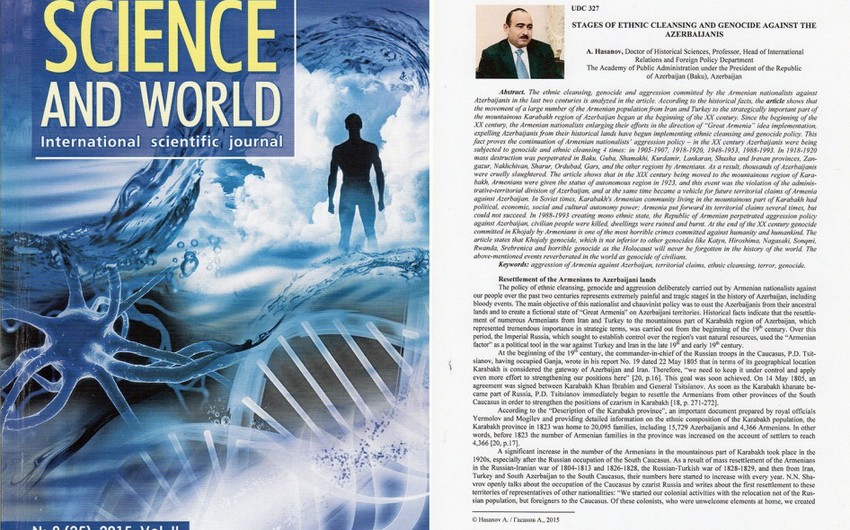 Baku. 23 October. REPORT.AZ/ An article by the Azerbaijani President`s Aide for Public and Political Affairs Ali Hasanov has been published by Russia-based “Science and world” journal. The article is headlined “Stages of Ethnic Cleansing and Genocide against the Azerbaijanis”.

Report informs, the article analyzes the ethnic cleansing, genocide and aggression committed by the Armenian nationalists against Azerbaijanis in the last two centuries. Mr Hasanov says that the movement of a large number of the Armenian population from Iran and Turkey to the strategically important part of the mountainous Karabakh region of Azerbaijan began at the beginning of the 20th century. “Since the beginning of the 20th century, the Armenian nationalists enlarging their efforts in the direction of “Great Armenia” idea implementation, expelling Azerbaijanis from their historical lands have begun implementing ethnic cleansing and genocide policy. This fact proves the continuation of Armenian nationalists’ aggression policy – in the 20th century Azerbaijanis were being subjected to genocide and ethnic cleansing 4 times: in 1905-1907, 1918-1920, 1948-1953, 1988-1993. In 1918-1920 mass destruction was perpetrated in Baku, Guba, Shamakhi, Kurdamir, Lankaran, Shusha and Iravan provinces, Zangazur, Nakhchivan, Sharur, Ordubad, Gars, and the other regions by Armenians.” “As a result, thousands of Azerbaijanis were cruelly slaughtered.”

He also hails the Azerbaijani government`s work to promote the international community`s awareness of the truth about the Armenians` crimes against the Azerbaijanis. “Due to the successful foreign policy pursued by the President Ilham Aliyev, a number of international organizations in most of the documents recognized Armenia as an aggressor state. Under the international law, genocide is the act against peace and humanity, and is considered the most serious crime. This was recognized by the UN General Assembly resolution 260 (III) on December 9, 1948 and the 1961 Convention on the Prevention and Punishment of the Crime of Genocide, which secured the legal basis of the crime of genocide.”

“During the Armenian aggression against Azerbaijan all acts of genocide reflected in the Convention were applied to the Azerbaijanis. Another fact supporting the sustainability of the criminal policy of Armenia, in the 20th century the Azerbaijanis were subjected to genocide and ethnic cleansing committed by Armenian nationalists four times: in 1905-1907, 1918-1920, 1948-1953, and finally, in 1988-1993. The aggressor state has been conducting the expansionist policy for more than 20 years in the full view of a watching world. Therefore, our state, guided by the abovementioned Convention, has all legal grounds to sue the Republic of Armenia in the UN International Court of Justice. President of Azerbaijan Ilham Aliyev always preferred peaceful settlement of the conflict. But taking into consideration that the Azerbaijani people and state will never put up with this occupation, policies of ethnic cleansing and temporary loss of our lands, the President has strongly emphasized that all means will be used for the liberation of our lands,” Mr. Hasanov said.