Head coach of Arsenal: Our goal is to win - INTERVIEW

Head coach of Arsenal: Our goal is to win - INTERVIEW I feel good. It's a great chance for us. I always look forward, Unai Emery, head coach of England's Arsenal, spoke at a press conference at the Baku Olympic Stadium on the eve of the UEFA Europa League final. 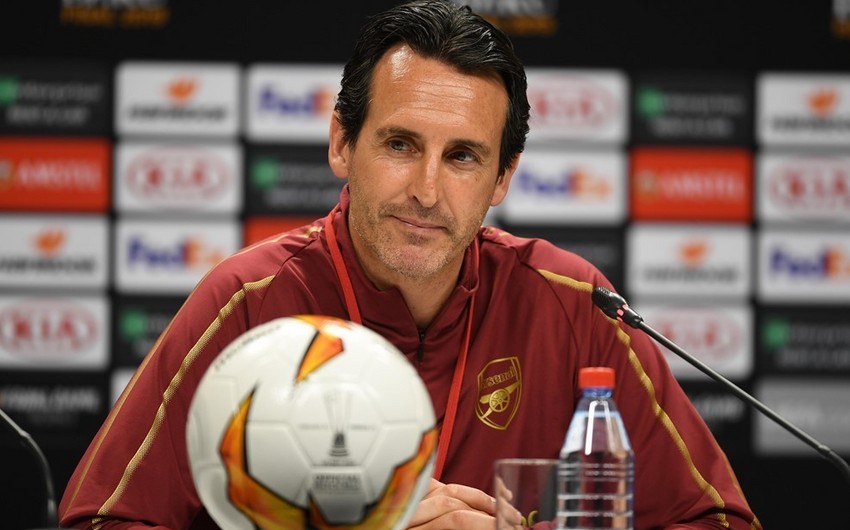 "I feel good. It's a great chance for us. I always look forward," Unai Emery, head coach of England's Arsenal, spoke at a press conference at the Baku Olympic Stadium on the eve of the UEFA Europa League final.

- Will Petr Čech be in Arsenal's starting squad for the final match? Can he continue his career in Prague's Sparta?

- I think about the final, not about Sparta. We must enjoy the game. Čech is a great man and professional footballer. He will finish his career.

- Arsenal did not make its name on succeeding in European cups. Is there a great responsibility for you in this regard?

- Players and me have a great responsibility. Our goal is to win. By this way we want to get to the Champions League. The competition itself is improving. Big clubs played in the final last year. It's an important part of the world football. What Arsen Wenger did in this club is worthy of appraisal. He brought football culture to the club. I want to preserve and improve this culture. I learned a lot from him. I have a great respect for and trust in him. Arsenal is one of the ten best teams in the world."

- If you win in the final, you will win the European League for the 4th time in your career and sign up for a new record. How important is it to you?

- Our goal is to play well. We want to win the title and get to the Champions League. We have a great opportunity to do this.

- Petr Čech will join Chelsea after the final. Can this affect your decision to put him  in the starting lineup?

- He deserves to believe in and trust him. I have not decided yet.

- The winner of the European League falls to the Champions League. How could you comment  this?

- For over ten years, I have seen great progress in the Europa League. It is a positive moment when the team winning the Europa League passes to the Champions League. This change contributed to the development of the tournament. Many teams play with strength. Here we have won "Napoli" and "Valencia". Now we will meet Chelsea.

- "Chelsea" has already get a pass to the Champions League. Does this give you an extra advantage?

- I do not think this gives us more advantages. The main goal is to get the titles. This is the main goal for both teams.

Arsenal will meet Chelsea in the final at the Baku Olympic Stadium on May 29.