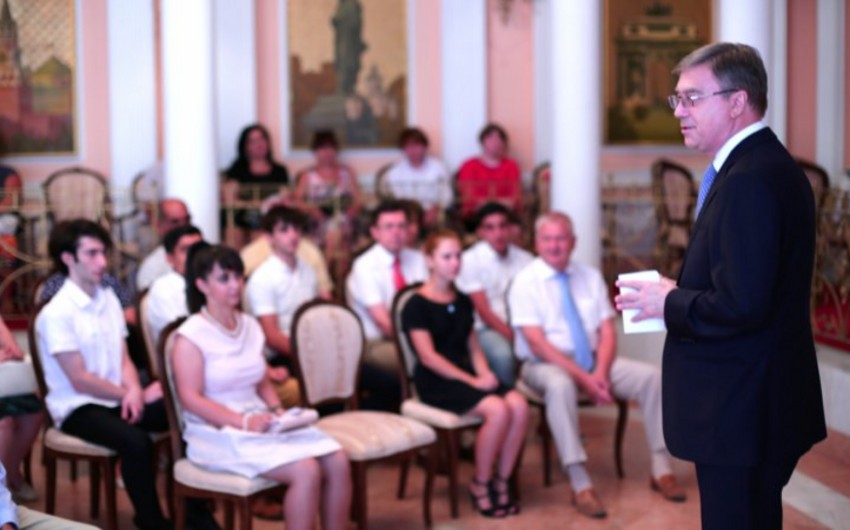 Baku. 2 September. REPORT.AZ/ Russian Ambassador to Azerbaijan Vladimir Dorokhin met with Azerbaijani students accepted to study on a budgetary basis in the universities of Russia in 2014. Report informs citing the Russian Embassy in Azerbaijan.

According to Russian Ambassador Vladimir Dorokhin, the program on providing government scholarships to study in Russian universities from the budget of the Russian Federation is being implemented not for the first time. In 2009, 123 Azerbaijani students of this program, in 2010 - 192; 2011 - 141; 2012 - 138; 2013 - 139 people moved out to Russia. Today 115 people are enrolled in Russian universities. A decision to enroll 15 more students is being worked out.

"All the numbers I mentioned show great interest in the preservation of higher education in Russia, the high prestige of Russian diploma in Azerbaijan. Students choose our universities and study here not only on the budget line, but also on their own initiative, at their own expense. Therefore, Russia remains one of the leading international centers for the training of Azerbaijani specialists", the ambassador said at a meeting with students.

Azerbaijan occupies the 5th place among the CIS countries in the total number of students studying in Russian universities. More students from Kazakhstan, Belarus, Turkmenistan and Uzbekistan come to study in Russia.