Baku. 17 March. REPORT.AZ/ Ambassador Extraordinary and Plenipotentiary of the Federal Republic of Germany to Azerbaijan Mrs. HeidrunTempel made presentation on ‘German Politics on Renewable Energy and the ‘Energiewende’ at Baku Higher Oil School (BHOS).

Report was told in the press service of Baku Higher Oil School, BHOS rector Elmar Gasimov heartily welcomed Ambassador Heidrun Tempel. Elmar Gasimov said that BHOS established collaboration with a number of international companies including German company E.ON as well as the University of RWTH Aachen, Germany, in the field of renewable energy.

BHOS rector stressed that owing to the above said collaboration the Training and Research Center on Renewable Energy was founded at BHOS. Rector particularly said that the laboratories of the center would be available at BHOS new campus. Pointing out achievements of Germany and initial steps taken by Azerbaijan in this very field BHOS rector talked about the works carried out at BHOS in this connection. Mentioning the termination of the tenure of Mrs. Tempel in Azerbaijan Elmar Gasimov said that he was convinced that the Ambassador would leave the country with good memories and wished Mrs. Tempel every success in future.

Ambassador of Germany to Azerbaijan Mrs. Heidrun Tempel first of all said she was pleased to be at BHOS and that she attached great significance to cooperation between BHOS and German universities. Then she started her presentation on ‘German Politics on Renewable Energy and the ‘Energiewende’. She particularly brought to the attention of students Germany’s experience in the field of renewable energy and the works carried out in this regard. Stressing the importance of science and research in the field of renewable energy Mrs. Tempel shared information on how Germany was dealing with the case in question. She expressed her confidence that the scientific methods to be used by BHOS Training and Research Center on Renewable Energy in Azerbaijan would be of great contribution in future. The questions and answers session followed the presentation. In conclusion BHOS Elmar Gasimov granted honorary diploma of BHOS to Mrs. Tempel. 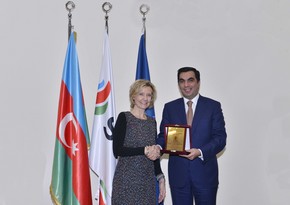