​Formula 1 presentation was held at Baku Higher Oil School Some videos on Formula 1, Grand Prix of Europe, Baku, were shown
1465 Baku. 13 May. REPORT.AZ/ The presentation on Formula 1, Grand Prix of Europe to be held in Baku, was jointly organized by Knowledge Foundation under the President of Azerbaijan and ‘Baku City Ring’ operation organization at BHOS. Head of students’ affairs department Habiba Sadigli welcomed the guests and underlined the fact of formation of positive image of Azerbaijan due to recent hosting internationally significant events and competitions in our country.

The head of international projects section of Knowledge Foundation Riyad Mammadzade, lead advisor of monitoring group on perspective development and projects AlmazAkhundova, the head of fan club on Baku Formula 1, the founder of the website f-1.az Rahim Aliyev joined the meeting.

Rahim Aliyev gave detailed information about forthcoming event. He said that Baku would host 8th Formula1, Grand Prix of Europe previously organized in 21 countries which would be distinguished with its uniqueness. Throughout competition, cars will be heading along seaside avenue, crossing around historical ‘Old City’ (‘IcheriSheher’).

Rahim Aliyev also said that more than 500 TV spectators and fans of Formula 1 competition would be concentrated on Baku turning the capital of Azerbaijan into global spotlight. Then some videos on Formula 1, Grand Prix of Europe, Baku, were shown. Finally, Rahim Aliyev answered students’ questions. It should be stated that June 17-19. 2016 for the first time in its history Azerbaijan will host Formula 1, Grand Prix of Europe. 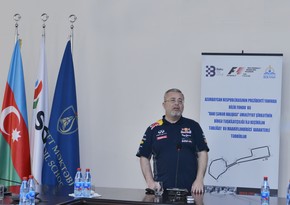