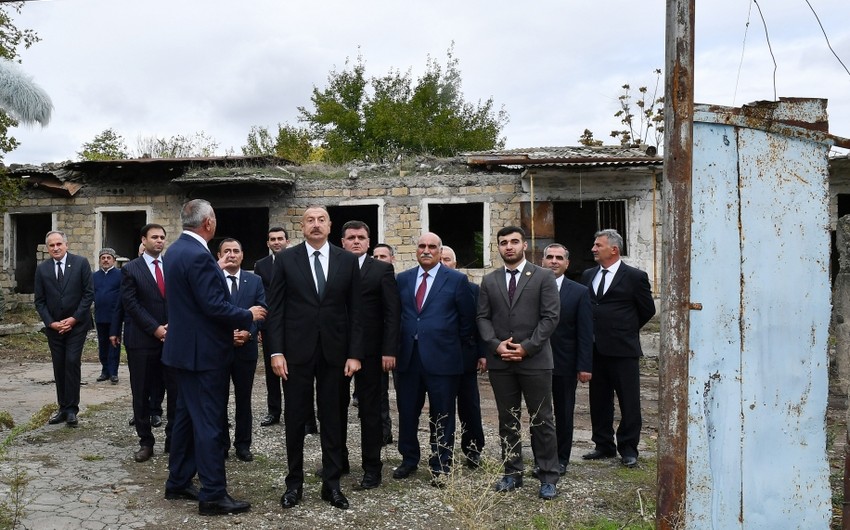 "We are now restoring the Zangilan mosque," President Ilham Aliyev said at a meeting with the general public of Zangilan district on October 20, Report informs, citing .

The conversation between the head of state and residents:

President Ilham Aliyev: We are now restoring the mosque.

Akhund: I worked as an akhund in this mosque. We also extend our appreciation to Mehriban khanim. Thank you again for giving us these happy days. In fact, you gave us the opportunity to live in Zangilan for the second time. Mr. President, thank you on behalf of all the people of Zangilan.

President Ilham Aliyev: Thank you very much. The Heydar Aliyev Foundation is engaged in the restoration of the mosque, and plaques have already been placed there. When we were there, we also laid a symbolic foundation stone. We will restore it too.

First Lady Mehriban Aliyeva: That remaining part of it.

President Ilham Aliyev: Yes, we will restore that ancient part. I was told that there was a club or a warehouse there in Soviet times.

Resident: This is the forest of our village. It is one of the largest fertile forests of Azerbaijan.

Resident: Yes, Vanadli village, it is down there. They have cut down all the trees - linden, oak, hornbeam, ulas. It was one of the biggest forests with many rare trees.

President Ilham Aliyev: They have cut down all the trees. When we were in Basitchay, we saw that they had even burned the stumps. They cut down trees and burned them. A part of the Basitchay reserve survives, covering an area of more than 100 hectares.

Resident: Yes, it used to be a state reserve.

President Ilham Aliyev: Yes, as you also said, it is the first plane tree forest in Europe.