Turkish president rules out stepping back on Kavala case

Turkish president rules out stepping back on Kavala case "There is no stepping back in my book," Turkish President Recep Tayyip Erdogan told reporters on his way back home from Azerbaijan, Report informs, citing Haber Global. 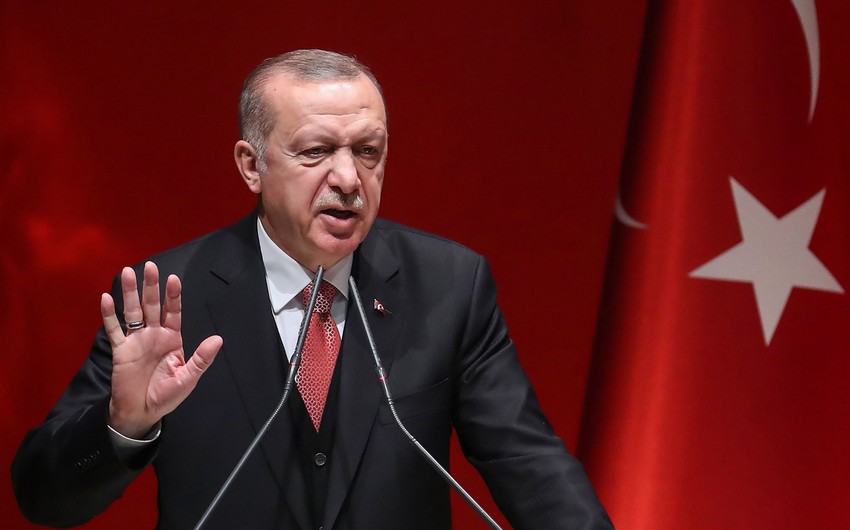 "There is no stepping back in my book," Turkish President Recep Tayyip Erdogan told reporters on his way back home from Azerbaijan, Report informs, citing Haber Global.

Asked to comment on foreign media reports, claiming that “Erdogan escaped a crisis, took a step back”, Erdogan said, "how did I take a step back? I am in the attack. There is no stepping back in my book”.

"I just have an expectation - we read what we know. The Council of Europe reads what it knows. Whatever they will read, we will listen and see. We will do our part after listening to both the European Court of Human Rights and the Council of Europe. We will do what is needed. I am fulfilling my duties as the president of the Republic of Turkey. I will not take heed of what others say. This is the result of my upbringing, the way I grew up. I will continue to do so until I die," he said.

The embassies of the United States, Germany, Denmark, Finland, France, the Netherlands, Sweden, Canada, Norway, and New Zealand in Turkey in a joint statement demanded the release of businessman Osman Kavala. After Turkish President Recep Tayyip Erdogan instructed the Foreign Ministry to declare the ambassadors of those countries persona non grata, the ambassadors said they would abide by Article 41 of the Vienna Agreement.

Osman Kavala was arrested on November 1, 2017, as part of a probe into the events in Gezi Park, the 17-25 December assassinations committed by the Fetullah terrorist organization (FETO), and the July 15 attempted coup in Turkey. He was accused of organizing and managing the Gezi terrorist organization. Kavala was acquitted of the charges in court in 2019 but was re-arrested immediately after his release, this time over other charges related to the coup attempt added to his criminal case. In the end, the court sentenced him to four years in prison.