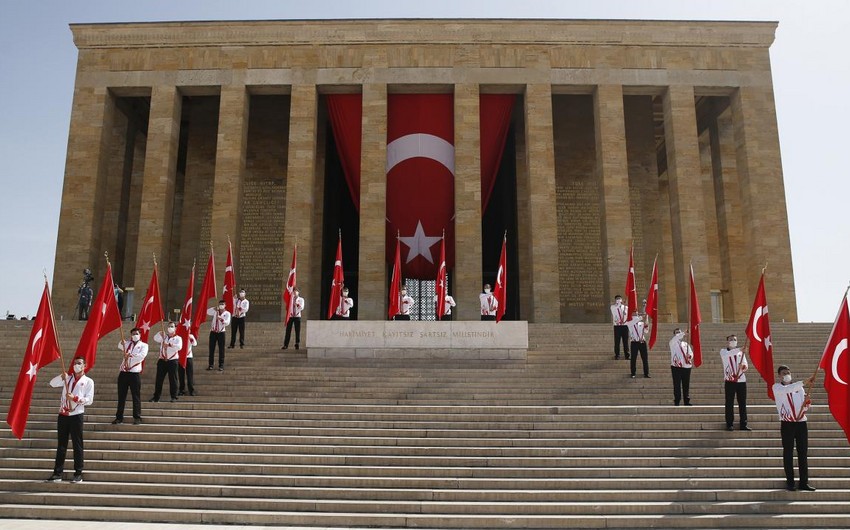 May 19 is Commemoration of Atatürk, Youth and Sports Day in Turkey, Report mentions, referring to TRT Haber.

This year's celebrations are different due to the coronavirus.

The first event of the 102nd anniversary of the step to salvation will be held at the Mausoleum of Mustafa Kemal Atatürk (Anıtkabir). Minister of Youth and Sports Mehmet Muharrem Kasapoğlu will visit the mausoleum with Turkish Vice President Fuat Oktay and a delegation.

On May 19, 1919, Atatürk began the national struggle with a speech in Samsun. Therefore, today at 19:19 local time, the national anthem of Turkey will be sung from the balconies and windows of houses in all cities.

This event has been celebrated as a national holiday since May 19, 1938. Mustafa Kemal Ali Rza Atatürk, the founder of the Republic of Turkey, was born on May 19, 1881, in Thessaloniki, present-day Greece. Mustafa Kemal, who fought bravely defending the Dardanelles during the First World War and was promoted to the rank of general - pasha, led the "Kemalism" movement, which began in Anatolia in 1919 and was later named after him. That date is a step towards salvation.

He founded the Turkish Grand National Assembly in 1920 and was elected chairman of the parliament and the government he formed. On Ataturk's initiative, he established the Turkish Republic on October 29, 1923, under the slogans 'Authority, without any condition and reservation, belongs to the nation' and 'Peace at home, peace in the world'. He led Turkey as the first president of Turkey in 1923-1938. Mustafa Kemal Ataturk died on November 10, 1938 at the Dolmabahçe Palace in Istanbul.