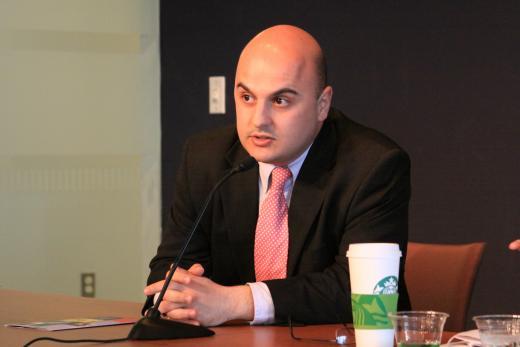 According to him, on February 18th, 2019, a digital outlet based in Brooklyn (New York), had published a long essay glorifying, revering the Armenian religious architecture and culture in the ancient land of Azerbaijan, Nakhchivan Autonomous Republic.

"The authors of this long and misleading publication, Sarah Pickman and Simon Maghakyan have unleashed a barrage of slander, as well as spitted numerous academically shaped insults against Government of Azerbaijan.

Pickman and Maghakyan lead the reader into an abyss of misinformation, attempt to destroy and tarnish the well known historical facts about Nakhchivan Autonomous Republic and its ancient history. With their misleading citations and science fiction photos throughout  the article, the two authors aim to achieve international notoriety and prestige at the cost of Azerbaijan’s millenary culture; openly attacking and attempting to cover with an Armenian mantle the rich heritage of Nakhchivan Autonomous Republic is absolutely an act of bigotry, chauvinism and depicts once again the harmful agenda orchestrated by U. S. based Armenian interest groups whose only purpose is to destroy global interfaith dialogue, denigrate multiculturalism and promote hostility in the Caucasus region, instead of peace and prosperity", - Peter Tase said.

"Pickman’s appalling remarks illustrate an insidious political offensive and information warfare that is clearly orchestrated by Yerevan’s top officials, while Armenia commemorates three decades of being an aggressor state by occupying over twenty percent of the sovereign territory of Azerbaijan and daily violating the ceasefire across the borderline with Nakhchivan and along the seven surrounding districts of Nagorno-Karabakh. Armenia’s domestic state of affairs are in dire situation: economic stagnation, high level of unemployment and increased levels of grey economy as well as a malnourished Armed Forces. The media coverage of all these determinant nation building factors would bring more progress to every Armenian citizen and regional progress, rather than contaminate digital newspapers with manipulated facts and photos, as well as Armenian ugly propaganda machine artifacts, fake news and grossly unreliable information", - the US expert added.

"It is evident that Armenia’s fascist regime at home and inflammatory Armenian Diasporas abroad have constantly issued offensive press releases and abhorrent remarks against the hardworking and suffering nation of Azerbaijan. It is non-sense to addressing and responding to every manipulated source in the so called tedious and unscrupulous research presented in Pickman’s essay (as it certainly becomes a dreary read), it is unfair for the reader to address matters that have never happened throughout ancient and modern history of Julfa and Nakhchivan – Azerbaijan; the two authors even write incorrectly, misinforming the public opinion, all names of locations in the territory of Azerbaijan.

Simon Maghakyan and other sources have proved and confirmed that during the Soviet Union period, all grave stones were carried by Armenian nationals from Julfa region of Azerbaijan to Armenia. The perfect examples are the Grave stones placed in the yard of Yerevan Brandy Factory and in Yerevan State History Museum.

An original Julfa khachkar (above) is one of a dozen surviving grave stones that were removed from Nakhchivan during or before the Soviet Union era, displayed at The Metropolitan Museum of Art’s Armenia! exhibit (September 22, 2018-January 13, 2019), on a loan deal from Armenia’s Mother See of Holy Etchmiadzin.

As a Ph. D. degree candidate at Yale University, Pickman should make an fairly scientific effort to write an essay about the current situation of Azerbaijan’s religious, cultural, grave stones and ancient historical monuments in the sovereign territory of Azerbaijan that have been under the occupation of Armenian Armed Forces for over thirty years and are fully destroyed, including the districts of Agdam, Kalbajar, Lachin, Qubadli, Jabrayil, Zangilan, Fuzuli. Perhaps a research article on Sarsang Reservoir that is under the Armenian Control and is an imminent threat to over 450 thousand Azerbaijani citizens living in the regions nearby Azerbaijan’s Nagorno-Karabakh, is truly among pressing matters that require a global attention, instead of pursuing American ambassador Morgenthau’s tarnished legacy during World War I".