A human chain protest was formed in central Tbilisi, the capital of Georgia.

The symbolic rally, attended by supporters of former President Mikheil Saakashvili and public activists, was dedicated to the 18th anniversary of the Rose Revolution, the local bureau of Report informs.

The human chain stretched from Freedom Square to the former Rose, now the First Republic, square.

The purpose of the human chain protest was to remind of the importance and value of November 23. 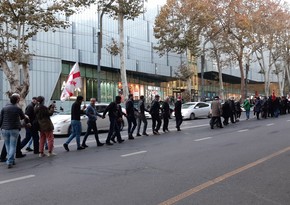