Erdoğan: More than 300 Turkish security forces were killed by terrorists since last summer

Erdoğan: More than 300 Turkish security forces were killed by terrorists since last summer 'The PYD is supported because it fights against ISIL. Nusra Front is also fighting against ISIL. Why is it bad?'
2138 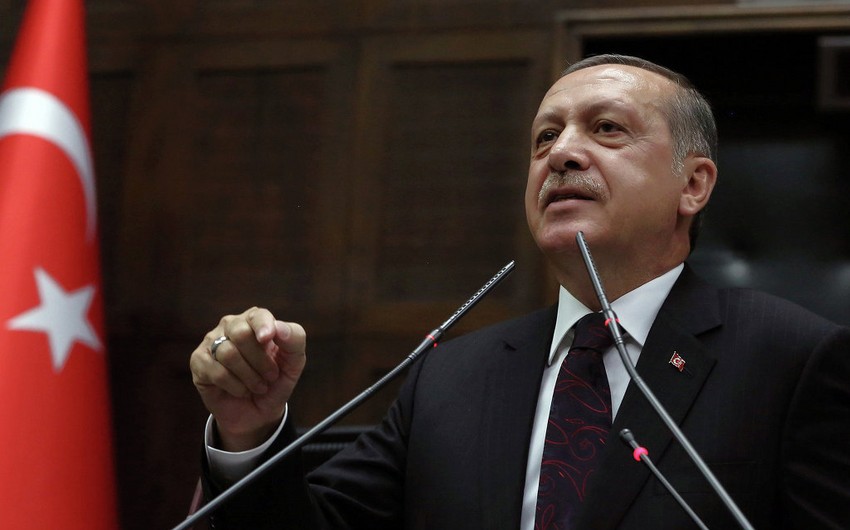 Baku. 24 February. REPORT.AZ/ Turkish President Recep Tayyip Erdoğan insisted that a Syrian Kurdish militia group that the US calls an effective partner in the fight against the Islamic State of Iraq and Levant (ISIL) is a terrorist group linked with the Kurdistan Workers' Party (PKK) and urged it be excluded from a ceasefire agreed by the US and Russia in Syria, Report informs referring to the Turkish media.

The US and Russia have announced a ceasefire in Syria will come into effect on Feb. 27 but that ISIL and al-Qaeda's Syrian arm, Nusra Front.

Erdoğan said the ceasefire is positive in principle but said the United States, the European Union, United Nations, Iran and Russia of acting dishonourably in Syria by directly or indirectly permitting President Bashar al-Assad's forces to kill civilians. He also said it was disconcerting that the approach towards the Syrian opposition is "ambivalent" while the Assad regime is backed openly.

Turkey, which has been shelling positions of the Syrian Kurdish militia group People's Protection Units (YPG) since Feb. 13, insists that the group is the Syrian wing of the PKK and thus should be treated as a terrorist organization. Ankara also initially blamed the YPG for a car bomb attack in Ankara last week that killed 29 people although a PKK splinter group claimed responsibility.

"Our allies must understand that they are at a crossroads. It is a fact that the [the Democratic Union Party] PYD and YPG are terrorist organizations that are extensions of the PKK," Erdoğan said.

In an apparent response to US statements calling the YPG an effective partner in the fight against ISIL in Syria, Erdoğan said the notion that the YPG was supported because it is fighting ISIL was a "great lie."