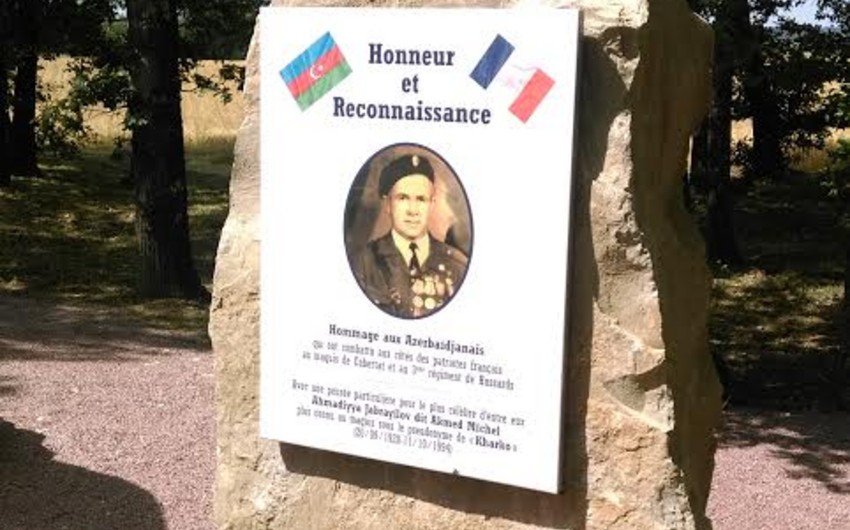 Baku. 22 June. REPORT.AZ/ On June 20, overdue homage was duly paid to Ahmadiyya Jabrayilov (aka Ahmed Michel) and other Azerbaijani members of the French Resistance who participated in the Maquis de Cabertat and the Third Hussars Regiment during the Second World War.

Taking place in front of the Mausoleum of Cabertat, close to Montauban – 50km from Toulouse – that houses the remains of the Resistance heroes, including those from Azerbaijan – the commemoration included the unveiling of a plaque in the presence of Ayaz Gojayev, Cultural Advisor, Azerbaijani Embassy in France; Valérie Rabault, MP, Tarn-et-Garonne region; Pierre Amestoy, Director of the local branch of the Office of Veterans under the Ministry of Defence; and Robert Bonhomme, representing the Sons of those Murdered in Tarn-et-Garonne and mayors and dignitaries from the surrounding cities, including Montauban, Monclar, Vaissac, Nègrepelisse, Montricoux and Puygaillard.

Report informs, the ceremony, attended by around 150 people, was organised by the Friends of the Maquis of Cabertat Association and the French office of The European Azerbaijan Society (TEAS).

The ceremony began with a religious ceremony in front of the mausoleum commemorating the French Resistance members who were killed on 20 June 1944 by Nazis invading the Maquis. This was followed by a welcome address by Francis Delmas, Mayor of the City of Vaïssac, and a keynote by Michel Poux, President, Friends of the Maquis de Cabertat Association. This was followed by a performance of the Azerbaijani and French National Anthems, paying utmost respect to the Brothers in Arms who fought alongside each other against Fascism.

The flag carriers, followed by the Azerbaijani and French delegations, moved to a second site, a few meters away, where the plaque in memory of all Azerbaijanis who fought within the French Resistance, including Ahmadiyya Jabrayilov, was unveiled by Ayaz Gojayev, on behalf of the Azerbaijani Embassy; Marie-Laetitia Gourdin, TEAS; and Michel Poux, Friends of the Maquis de Cabertat Association.

Marie-Laetitia Gourdin, Director, TEAS France, commented: “Today, we wish to honour the Azerbaijanis who fought in the Maquis de Cabertat and the Third Hussars Regiment in the Midi-Pyrénées, Vosges and Alsace Regions, and in particular to Ahmadiyya Jabrayilov, also known as Akmed Michel, or Kharko by his Brothers in Arms. Engaged in the Red Army against the Nazis during World War II, Ahmadiyya was imprisoned in the camps in Ukraine and in France, before escaping and entering the French Resistance in Spring 1944 in the Tarn-et-Garonne Region, where he joined the Maquis de Cabertat.

“After participating in the liberation of several cities in the Midi-Pyrénées Region, and meeting General de Gaulle in Toulouse in September 1944, Ahmadiyya left for Alsace, where he participated in the liberation of the cities of Mulhouse and Belfort. TEAS wanted to make sure that the name of Ahmadiyya is not forgotten, and this is why our foundation collaborated with the Friends of the Maquis de Cabertat Association in organising a joint ceremony to pay respect to those who joined forces to fight the Nazis in the name of liberty.”

Mr Gojayev recalled: “Since the start of the Second World War, Azerbaijan was engaged in the campaign by the former Red Army of the Soviet Union against the Nazis. The war itself did not spread to Azerbaijani territory, but Azerbaijanis felt its weight, as more than 600,000 of its citizens participated in the war, of which half were killed. Azerbaijan played an important role in the war, given its essential oil resources. Hitler had a plan to invade Baku, the capital of Azerbaijan, to access these reserves. Azerbaijanis fought alongside many members of the Resistance in Europe, including in the former Yugoslavia, Italy, Poland and, of course, France. Ahmadiyya Jabrayilov, also known as Akmed Michel, played a key role. He received the Legion d’Honneur, one of the highest official recognitions from the French Republic for those who made a difference by their actions, and was declared National Hero of France.”

The Azerbaijani and French anthems were played once again, closing a moving ceremony in the midst of the woods in which Resistance members used to hide.

The Mayor of Vaïssac then welcomed all participants to share drinks and a lunch. André Terrassier, one of the last surviving members of the French resistance from the Maquis de Cabertat, recalled: “Yes, I knew Akmed Michel; he was very brave and always smiling.” The son of one another Resistance member, named René Chambard, was also present. He shared his loving memories of Ahmadiyya’s last visit to his father in 1977. He recalled the letters they exchanged where his father called Ahmadiyya his ‘Brother in Arms’.

The story of Ahmadiyya – born near Sheki – is one of patriotism, valour, luck, and tenacity. As one of the 240,000 Soviet soldiers taken prisoner whilst launching an offensive against the Nazis near the Izyum Bridge over the Don, Ahmadiyya was transferred to many camps, eventually ending up in a camp in Frankfurt-an-der-Oder, near the Polish border, for Soviet soldiers from the Soviet Republics. Refusing to join the Nazi cause after promises were made regarding the independence of Azerbaijan following a Nazi victory, he decided to escape and rejoin the Red Army. Surviving forced labour and considered to be Jewish, he underwent sadistic experiments with hydrogen cyanide, was assisted by a Turkish-speaking cleaning woman and escaped using a the ruse of a fake ‘burial’, thereafter joining the French Resistance.

Often disguised in women’s clothing, he blew up those restaurants and cafés known to be frequented by Nazi officers, and sabotaged bridges and railway lines. Nicknamed ‘Kharko’, the Gestapo placed a price of DM10,000 on his head, and he joined the Maquis of Cabertat in 1944. Following the liberation of Toulouse in September 1944, he met General Charles de Gaulle, and after the liberation of the Midi–Pyrénées, he joined the Third Hussars Regiment, with whom he participated in the Battle of the Vosges and the liberation of Mulhouse and Belfort.

Thereafter, he was forcibly repatriated to the Soviet Union, following the Franco–Soviet Pact, where was tortured by the NKVD and condemned to forced labour. However, his bravery was belatedly recognised in 1966, when President General de Gaulle made his second visit to the Soviet Union. By this time, he had returned to Sheki, but General de Gaulle’s request to see him resulted in overnight fame. He became a National Hero of France, and received the Croix de Guerre, the Cross of Military Valour and the Medal of the French Resistance, amongst other acknowledgements. Ahmadiyya also toured the regions of France that he helped to liberate, and met many of his Resistance friends. His life was ended at the age of 74 by a car accident in Sheki.

The story of Ahmadiyya Jabrayilov has formed the basis of several books and documentaries, and it is only fitting that his memory is revered in France – his second homeland. 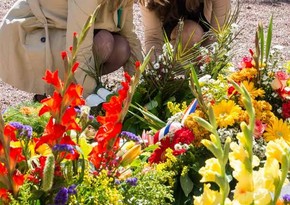 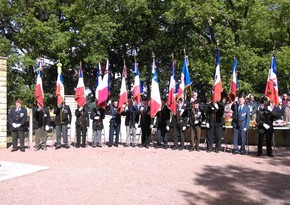 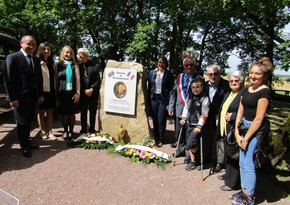 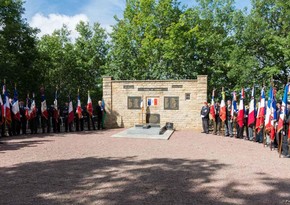 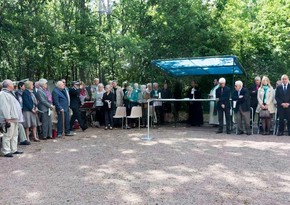