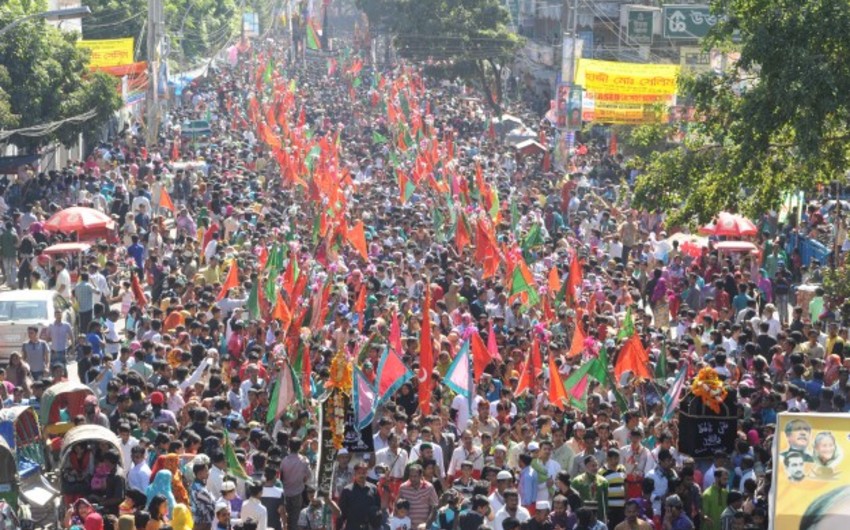 The streets of Bangladesh’s capital, Dhaka, have been covered in green and red throughout December.

On Tuesday, the country celebrates its victory day, when its war for independence from Pakistan ended in 1971. In the run-up, hundreds of men selling flags walk through the streets with as many flags of as many sizes as they can carry,nforms Report citing BBC.

Flags are draped over cars and shops, red and green bunting hangs from apartment blocks and flashing lights dress official buildings. Among the icons of independence brought out in December is the country’s original flag, used during the 1971 war, which depicts Bangladesh’s geographical boundaries.

"I usually sell fruit, but for now I'm selling these flags," says Abdul Bari, who sits with a pile of his merchandise near Dhaka University. He says he made 3,800 Taka ($50) on the eve of the 16th. "I feel for the independence movement, Sheikh Mujibur Rahman led us, but this work also has its benefits."

This year’s celebrations come as memories of the war have been rekindled by investigations into alleged war crimes committed by local allies of the Pakistani army. A year ago, one of the senior leaders of the Jamaat-e-Islami party, Abdul Quader Mollah, was hanged after the tribunal found him guilty of war crimes.

In October another Jamaat-e-Islami leader, Mohammad Kamaruzzaman, had an appeal against a death sentence rejected, meaning he will likely become the second to be hanged for war crimes.

Several other leaders were given death sentences the same week, leading Jamaat-e-Islami to call a series of nationwide strikes that crippled the country for more than a week and threw into relief the ideological divisions that have polarized the country since independence. Many supporters of Bangladesh's ruling Awami League party consider Jamaat-e-Islami to be anti-Bangladesh for allegedly fighting against the country's independence from Pakistan.

"It is essential to educate the young generation on the history, culture and identity of Bangladesh," he says.

"The country suffered after independence. The political forces that came to power, irrespective of political party, have used their position for money," says Ali. "In spite of highly confrontational politics, the economy has grown. It is a miracle."

"In terms of the ideas for which Bangladesh became independent, there is a long way to go," he says. "I don't feel political forces can achieve them. The social and cultural forces can be effective."

Near the site where the first Bangladeshi flag was raised, a group of English students from Dhaka University take pictures in front of a statue of freedom fighters.

"Though Bangladesh has become independent, there are obstacles we cannot deny," says Rafiqul Islam. "The political system is not favorable for us. The leaders are all about money, and that for this reason we cannot move forward into politics."

"I want all people of Bangladesh able to move freely and express themselves," he says.

"We want Bangladesh to be a model for the world."