Speaker Sahiba Gafarova: "Armenia does not desist from its criminal course even now"

Speaker Sahiba Gafarova: "Armenia does not desist from its criminal course even now" Chair of the Milli Majlis (Parliament) Sahiba Gafarova had a meeting with Chairman of the Italian Senate’s Standing Commission for External Affairs and Emigration Vito Petrocelli on 12 April, Report informs, citing the Parliament. 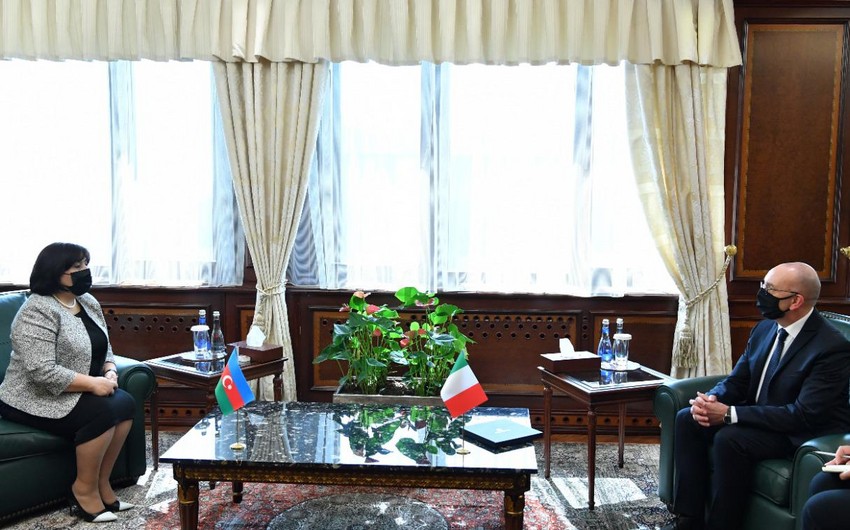 Chair of the Milli Majlis (Parliament) Sahiba Gafarova had a meeting with Chairman of the Italian Senate’s Standing Commission for External Affairs and Emigration Vito Petrocelli on 12 April, Report informs, citing the Parliament.

The Speaker welcomed the guest and then told him confidently that his visit was going to service cause of deepening the interparliamentary co-operation: “The interaction between Azerbaijan and Italy that grows from the ancient historical roots set new standards after our country regained its state independence.”

According to her, the exchanged visits of the presidents of the two states and the negotiations they have had have played a substantial role in achieving the high level that the bilateral relations sustain now: “Meanwhile, the bilateral documents signed to date provide those relations with a solid legal foundation. Not only the political and economic, but also the cultural, humanitarian, academic, and educational ties and co-operation between Azerbaijan and Italy are at their height. The public is well aware of the projects that the First Vice President of Azerbaijan Mehriban Aliyeva implemented in Italy acting in her capacity as the Heydar Aliyev Foundation’s President and the ICESCO and UNESCO goodwill ambassador. Such projects as those help make the bonds between the two states and nations yet more profound.”

“The two parliaments play a great role in the furtherance of the Azerbaijani-Italian relations, too. The past few years have seen a close collaboration established between the Milli Majlis and both chambers of the Italian Parliament. Both parliaments have friendship groups in action. The interparliamentary ties are growing stronger still thanks to the high-status mutual visits,” she added.

The Speaker also informed the guest of the victory that Azerbaijan had gained in the 44-day Patriotic War in 2020. She mentioned with emphasis that many Italian parliamentarians had voiced their support for the just cause of Azerbaijan then: “Armenia wreaked havoc, a great destruction, and vandalism in the Azerbaijani provinces it had occupied for close to thirty years. Towns, houses, villages as well as monuments of history, culture, and religion had been razed to the ground. Regrettably, Armenia will not desist from its criminal course even now. It has been refusing to let the Azerbaijani side have the maps of its minefields in defiance of all the urges, in committing another war crime and trampling down the international legal principles. Consequently, many Azerbaijani civilians and servicemen have tripped mines and been either killed or wounded after the war had been over. I presume the international community, too, should speak up against this move putting peace and security at peril so that these war crimes are stopped.”

Thanking for the warm welcome, Chairman of the Italian Senate’s Standing Commission for External Affairs and Emigration Vito Petrocelli also passed on to Mrs. Gafarova the greetings from Chair of the Senate of the Italian Republic, Senator Maria Elisabetta Alberti-Kasellati.

The Azerbaijani-Italian relations are setting very high standards currently with the energy co-operation having special importance, Mr. Petrocelli remarked before pointing out Azerbaijan’s crucial role in maintaining the energy security of Europe.

Chair of the Milli Majlis Sahiba Gafarova thanked for the greetings from Chair of the Senate of the Italian Republic, Senator Maria Elisabetta Alberti-Kasellati, and, in turn, asked Mr. Petrocelli to give her Mrs. Gafarova’s greetings.

There was also an exchange of opinions about the topics of interest to both sides during the meeting.