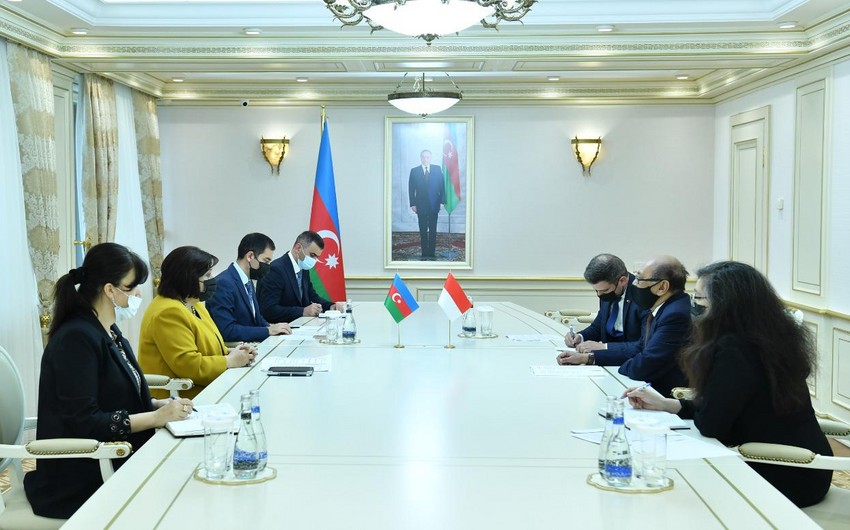 Today, the Speaker of the Milli Majlis Sahiba Gafarova met with Ambassador Extraordinary and Plenipotentiary of the Republic of Indonesia to Azerbaijan Hildi Hamid.

Welcoming the guest, Sahiba Gafarova wished him success in his diplomatic mission in Azerbaijan.

Noting the friendly relations between the two countries, the Speaker said that Azerbaijan and Indonesia enjoy strong ties, especially in the political sphere, and successfully cooperate in the United Nations, the Non-Aligned Movement, and other international organizations. They also noted the fruitful cooperation in the humanitarian sphere.

The Speaker noted that the two parliaments play a positive role in the development of bilateral relations. The supreme legislative bodies of the two countries carry out successful cooperation in both bilateral and multilateral formats. As an indication of this, there are working groups in the legislatures of both countries. She expressed confidence that contacts between the parties will increase after the end of the pandemic.

Informing the guest about Azerbaijan's victory in the 44-day Patriotic War last year, the Speaker said that Azerbaijan had liberated its lands from occupation and implemented UN resolutions. It was noted that Armenia had committed acts of vandalism in the occupied Azerbaijani lands for almost 30 years, destroying cities, houses, villages, historical, cultural, and religious monuments, including mosques. She also noted that despite all the calls, Armenia has once again committed a war crime, refusing to provide Azerbaijan with maps of mined areas in gross violation of the principles of international humanitarian law.

Expressing gratitude for the warm reception, Ambassador Hildi Hamid said he would further develop relations between the two countries during his diplomatic tenure in Azerbaijan. The Ambassador noted that Azerbaijan is a beautiful country with rich natural resources and great cultural richness. The diplomat expressed satisfaction with the development of relations between the two countries and said that there are vast opportunities to develop further ties in education, trade, energy, tourism, and other fields.

Hildi Hamid said he visited the liberated territories of Azerbaijan and described what he saw there. He hailed the work done by Azerbaijan to restore and reconstruct these areas and ensure lasting peace in the region. The Ambassador noted that his country has always had great respect for Azerbaijan's territorial integrity and sovereignty.