Zakir Hasanov meets with Commander of Land Forces of Turkey

Zakir Hasanov meets with Commander of Land Forces of Turkey S.Cholak awarded Medal "For Merits in the Sphere of Military Cooperation" of Azerbaijani Republic
714 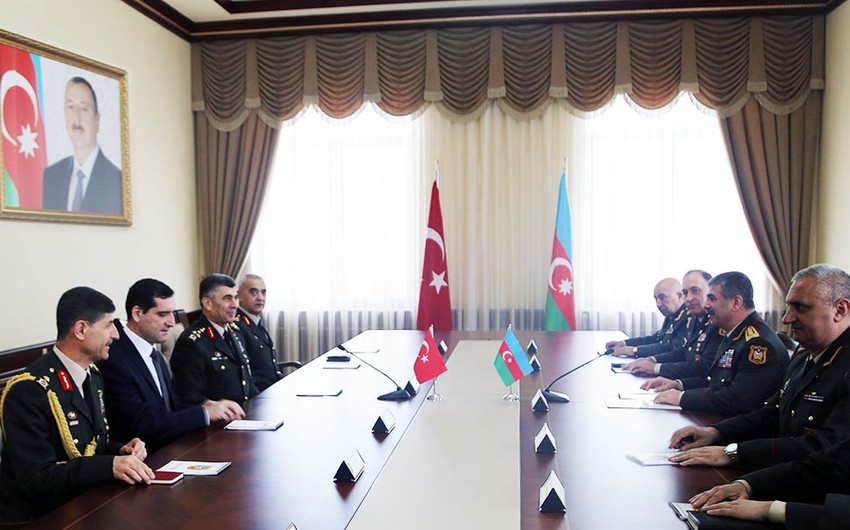 Baku. 12 June. REPORT.AZ/ On 12 June, the Minister of Defense of the Republic of Azerbaijan, Colonel-General Zakir Hasanov, met with the Commander of Land Forces of Turkey, General of the Army Salih Zeki Cholak, who is paying a visit to our country.

Having greeted the guests, Colonel-General Z. Hasanov noted that military cooperation between our countries is conducted both on a bilateral basis and within the framework of NATO. The Minister particularly emphasized the expansion of ties in the military, military-technical sphere and in the field of military education.

Speaking with deep satisfaction about his next visit to Azerbaijan, Army General S.Cholak noted the importance of conducting tactical exercises in Nakhchivan. He also stressed that the ties of our countries have ancient historical roots and are based on friendly traditions, adding that Azerbaijan is an important partner of Turkey.

Then a wide exchange of views took place on the military-political situation in the region, the prospects for the development of ties between the Armed Forces of Azerbaijan and Turkey, the organization of mutual visits of delegations of experts with the purpose of exchanging experience, conducting military exercises in both countries with the participation of various branches of Armed Forces, as well as on other issues of mutual interest.

At the end of the meeting, the Commander of Land Forces of Turkey, General of the Army S.Cholak, was awarded the Medal "For Merits in the Sphere of Military Cooperation" for his contribution to strengthening military cooperation between the two countries.