Zakir Hasanov: "If the conflict would not fairly be resolved as soon as possible, the enemy will feel the strength of our Army "

Zakir Hasanov: "If the conflict would not fairly be resolved as soon as possible, the enemy will feel the strength of our Army " 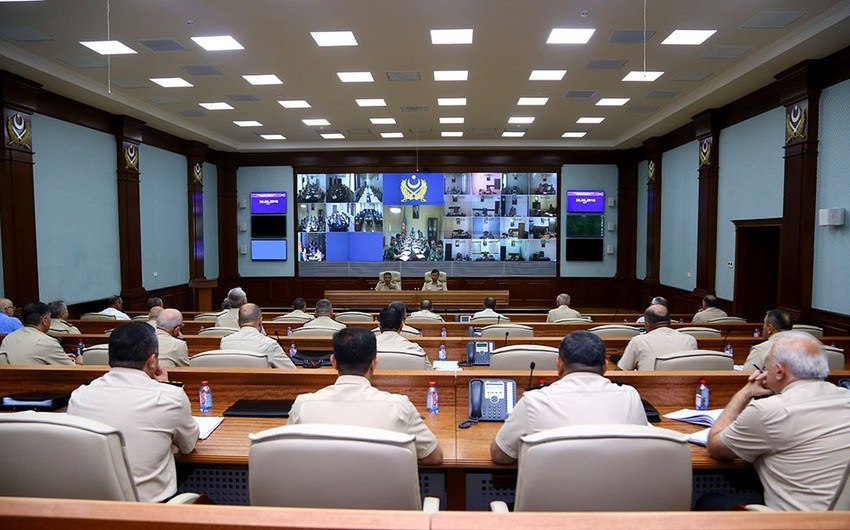 Baku. 30 June. REPORT.AZ/ The Minister of Defense of the Republic of Azerbaijan, Colonel General Zakir Hasanov held an official meeting on June 30. Report was informed in the press service of the Azerbaijani Ministry of Defense.

The meeting that was held with the participation of the deputies of Defense Minister, commanders of the branches of troops, chiefs of the main departments, departments and services of the ministry, as well as commanders of the Army Corpses also involved the commanders of formations stationed in the frontline zone and other responsible officers via video communication.The Minister of Defense has once again congratulated the servicemen on the occasion of the 100th anniversary of the creation of the Armed Forces, and highly appreciated the training of military personnel, as well as military equipment and the staff of aviation assets participating in the military parade. The minister brought to the attention of the meeting participants the satisfaction in connection with the organization of the anniversary celebrations, in particular, the military parade expressed by high-ranking military delegations who arrived in Azerbaijan from various countries to participate in the ceremonies.Colonel General Z. Hasanov having emphasized the attention and care provided by the President of the Republic of Azerbaijan, Mr. Ilham Aliyev to the Armed Forces, noted that high-level festive events once again demonstrated the country’s military power and the combat capability of our army to the whole world.Touching upon the current situation at the front, the Minister of Defense stressed the importance of paying particular attention to improving combat readiness, the discipline of military personnel and his vigilance during the conduct of combat duty.Emphasizing the words voiced by the Supreme Commander-in-Chief in his statements that we will no longer come to terms with the occupation of our lands, the Minister of Defense said: "Delaying the resolution of the conflict leads to its renewal in a larger scale. The conflict must fairly be resolved within the norms and principles of internationally law as soon as possible. Otherwise, the enemy will feel the will and patriotism of the Azerbaijani people, as well as the strength of our Army's weapons".Touching upon the exercises that will be conducted in the frontline zone for the period from 2nd to 6th of July, the Minister of Defense instructed the relevant officials. The Minister noted that during the exercises the main attention should be focused on the use of troops and the performance of combat missions under various scenarios for the liberation of the occupied territories, including the practical application of the most modern weapons and military equipment designed to destroy all enemy’s military infrastructure.