Tovuz battles: From post where Polad Hashimov was martyred - VIDEO REPORT In these days of last year, the Azerbaijani people, and the international community, stayed focused on information coming from the Tovuz region of the Azerbaijani-Armenian border. The news was gripping. Thus, since July 12, the enemy has carried out large 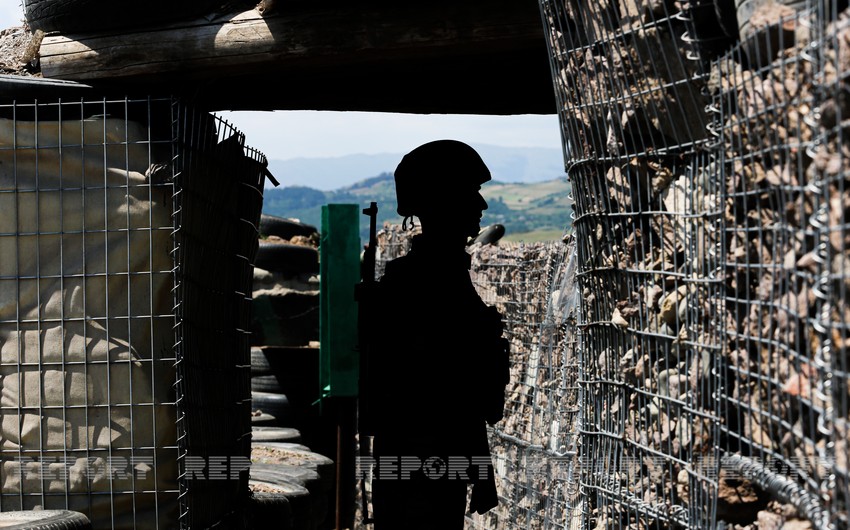 In these days of last year, the Azerbaijani people, and the international community, stayed focused on information coming from the Tovuz region of the Azerbaijani-Armenian border. The news was gripping. Since July 12, the enemy had carried out large-scale provocations in the Tovuz direction of the border.

The Armenian armed forces had been targeting civilians in Tovuz starting from noon that day. The enemy fired at our positions in Tovuz with artillery.

During the provocations, the units of the Azerbaijani Army resolutely prevented the enemy's sudden attack. As a result of the fighting, several Armenian bases, military equipment were destroyed, and dozens of service members were killed. During the Tovuz events, the combat readiness, victory spirit, and patriotism of the Azerbaijani soldier overcame the enemy's intention of occupying our lands.

In short, these battles were the beginning of a great victory. Successful counteroffensive in response to enemy's provocations laid the foundation for the great victory in the 44-day Patriotic War ...

Report's correspondent has visited the scene. He was in the Aghdam village of the Tovuz region, saw the posts that prevented Armenian provocations, and met with the Azerbaijani service members who showed heroism during the fighting.

The enemy is kept under complete control

During the visit, organized by the Defense Ministry, the journalists first visited our positions on an upland in the village of Agdam. 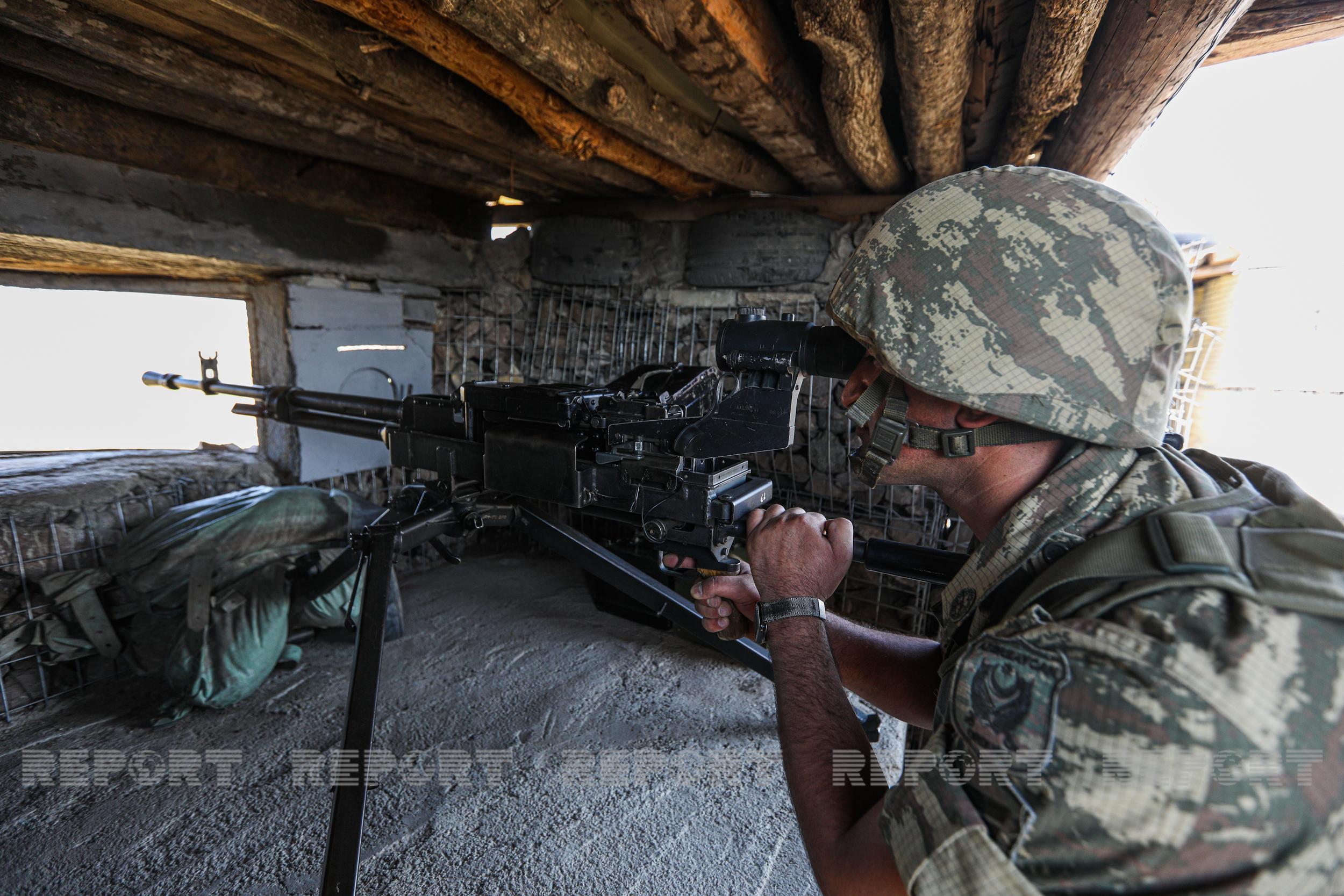 This height, which represents strategic importance, is now under the complete control of the Azerbaijani Army, as it was during the fighting. Enemy positions, including several settlements, are visible from these areas. Our soldiers monitor the Armenians at the observation posts 24 hours a day and keep the enemy under complete control.

Junior sergeant of the Azerbaijani Army Elgun Mammadov told Report that on July 12, 2020, when the Armenian armed forces committed provocations in Tovuz, he was serving at a post at that height. 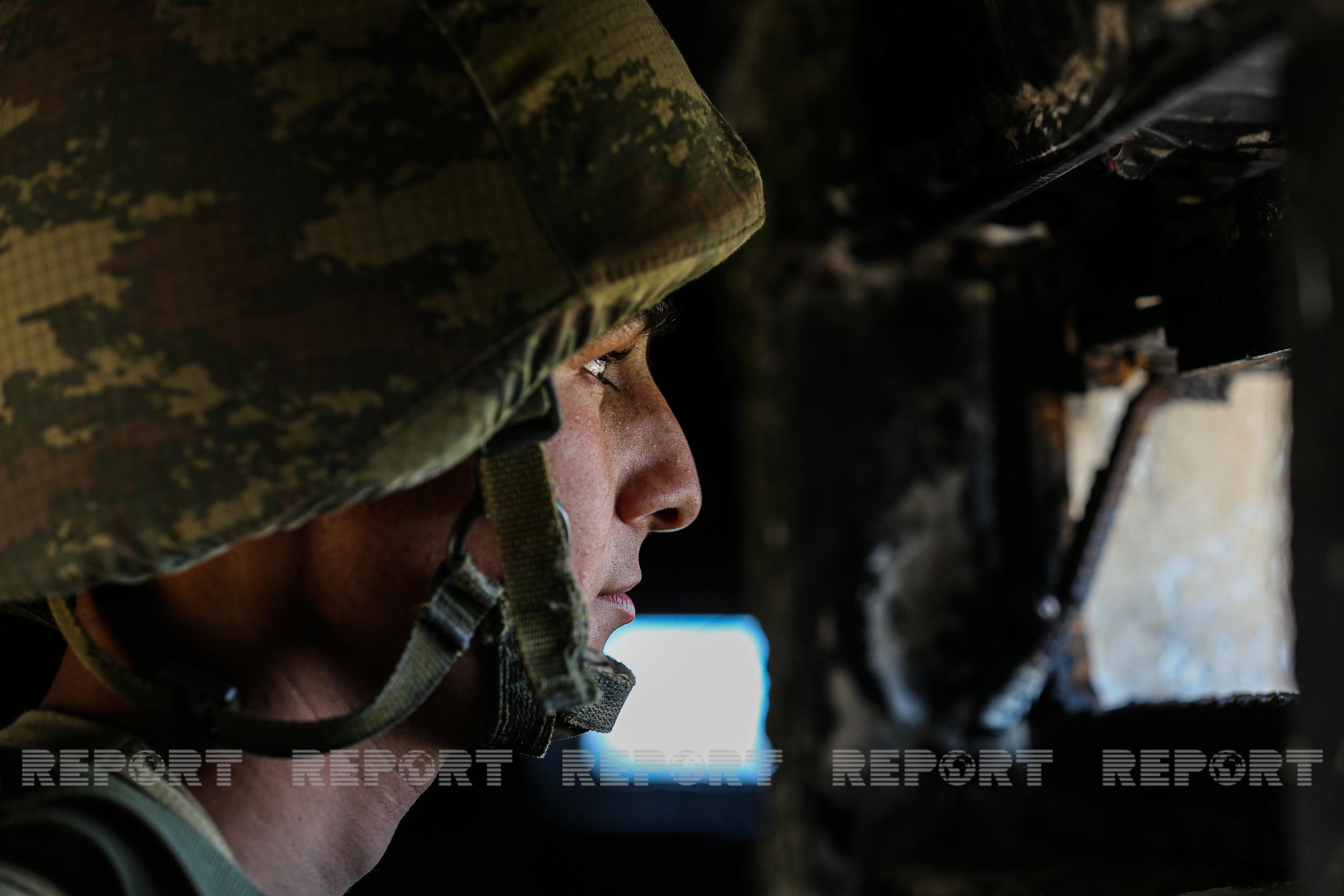 Heroes of Tovuz battles speak out... Sergeant of the Azerbaijani Army Rafael Poladov, who threatened the enemy with a proud bearing, also served at the battle post at the time of the events. He noted that on July 12, last year, at noon, the Armenian armed forces began firing at the Azerbaijani Army's battle positions and border villages, first with small arms and then with artillery.

"By the order of the command, the enemy's firing positions and artillery installations in the rear were silenced—the enemy intended to attack our battle positions. But our brave army resolutely prevented their attack. The people of Azerbaijan should be proud to have such a noble and combat-ready army. " A junior sergeant of the Azerbaijani Army, Asim Mammadov, is one of the heroes of the Tovuz battles. He was also among those who served in the combat post while preventing enemy's provocations. Mammadov said that he and his comrades-in-arms always stand guard for the homeland.

Media representatives visited another position located before the enemy posts. The newly created post was named after Namig Ahmadov, killed in the Tovuz battles. 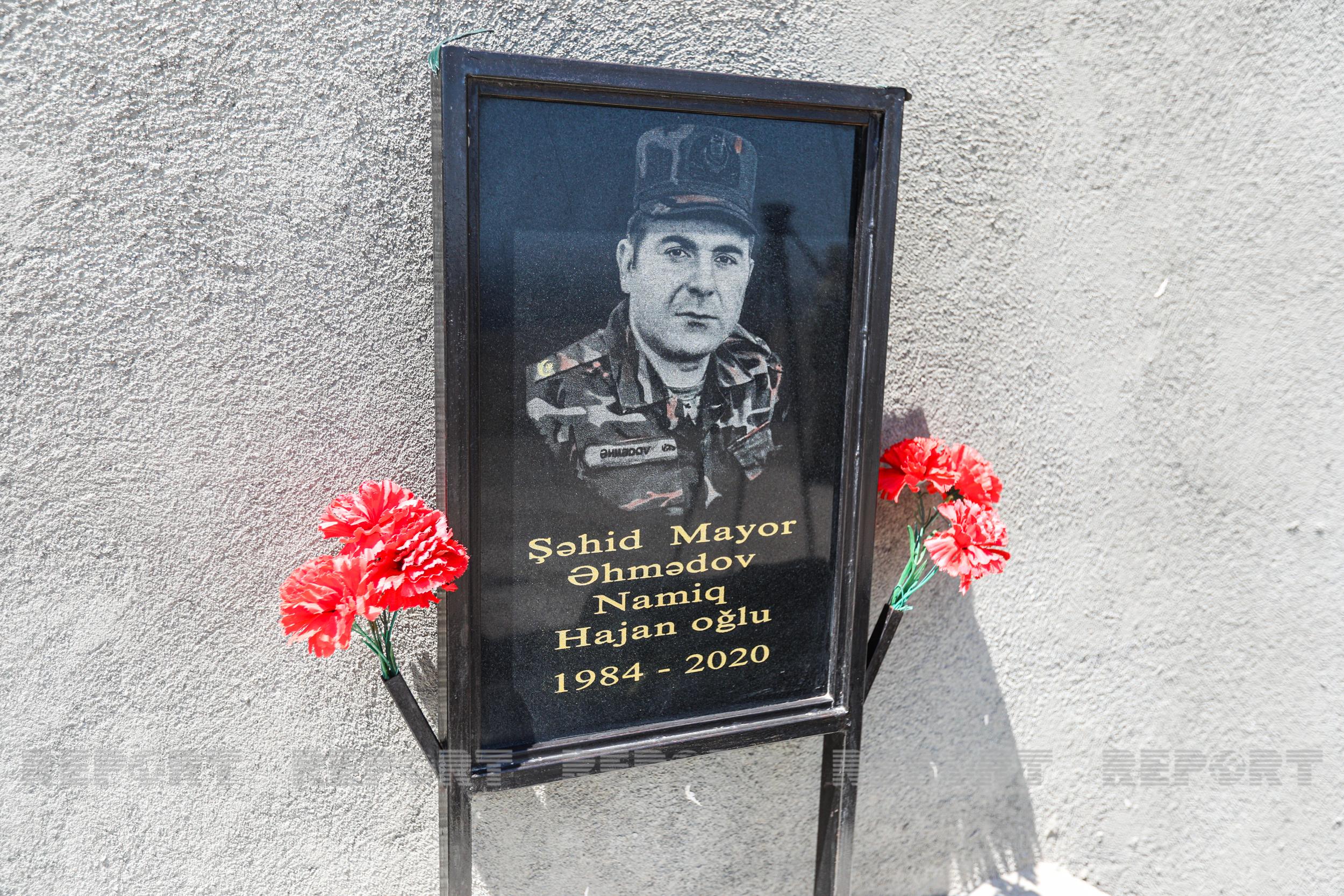 The journalists got acquainted with the conditions created inside the dormitory. In addition to the military dormitory, there is a food warehouse, a canteen, a bathroom, and other rooms under modern standards.

"The enemy faded away after the Patriotic War."

Lieutenant-Colonel of the Azerbaijani Army Agil Jafarov said that the battles aimed was to protect our state border and to silence the Armenians' firearms at that time, to give them a worthy response: "We had martyrs during the battles. May God have mercy on our martyrs! Today we are ready to prevent all provocations of the enemy. All 12 of our servicemen killed during the fighting are an example for our army. Besides our general, all of our martyrs were people who proved themselves in their work and earned the respect of their subordinates. They are the dearest and unforgettable people for us. We are proud of each of our martyrs and rejoice that the revenge for them was taken. After the war, the enemy is in low spirits and discoraged. That is, there is no reaction. " Another position that became a target of Armenian provocations is the "Mubariz" post. In this position, which has become the place of the oath of our soldiers, five servicemen of the Azerbaijani Army were martyred while preventing the Armenian provocation. On the same day, on July 14, the Armenian armed forces fired incessantly at our positions and residential areas with heavy artillery. Some of the shells fired by the enemy hit the Mubariz post. As a result, Major General Polad Hashimov, Colonel Ilgar Mirzayev, Major Namig Ahmadov, Major Anar Novruzov, and Gizir Yashar Babayev were killed.

Lieutenant of the Azerbaijani Army Akshin Aliyev is one of the servicemen who witnessed the death of his comrades in the "Mubariz" post. He said that when the enemy fired on our positions, Major General Polad Hashimov ordered him to go to another trench: "I had just entered another trench. At that moment, the shells fired by the enemy hit the place where Mr. General and other service members were. Major-General Polad Hashimov, Colonel Ilgar Mirzayev, Major Namig Ahmadov, Major Anar Novruzov, and Warrant Officer Yashar Babayev rose to the peak of martyrdom before my eyes. The blood of our martyrs did not remain on the ground.

The Azerbaijani Army demonstrated its strength in the 44-day Patriotic War, which began on September 27, 2020. Our glorious army destroyed the enemy's armed forces, liberated our lands from occupation, and restored Azerbaijan's territorial integrity. Thus, historical justice was restored, and the ancient lands of Azerbaijan were returned to their real owners. 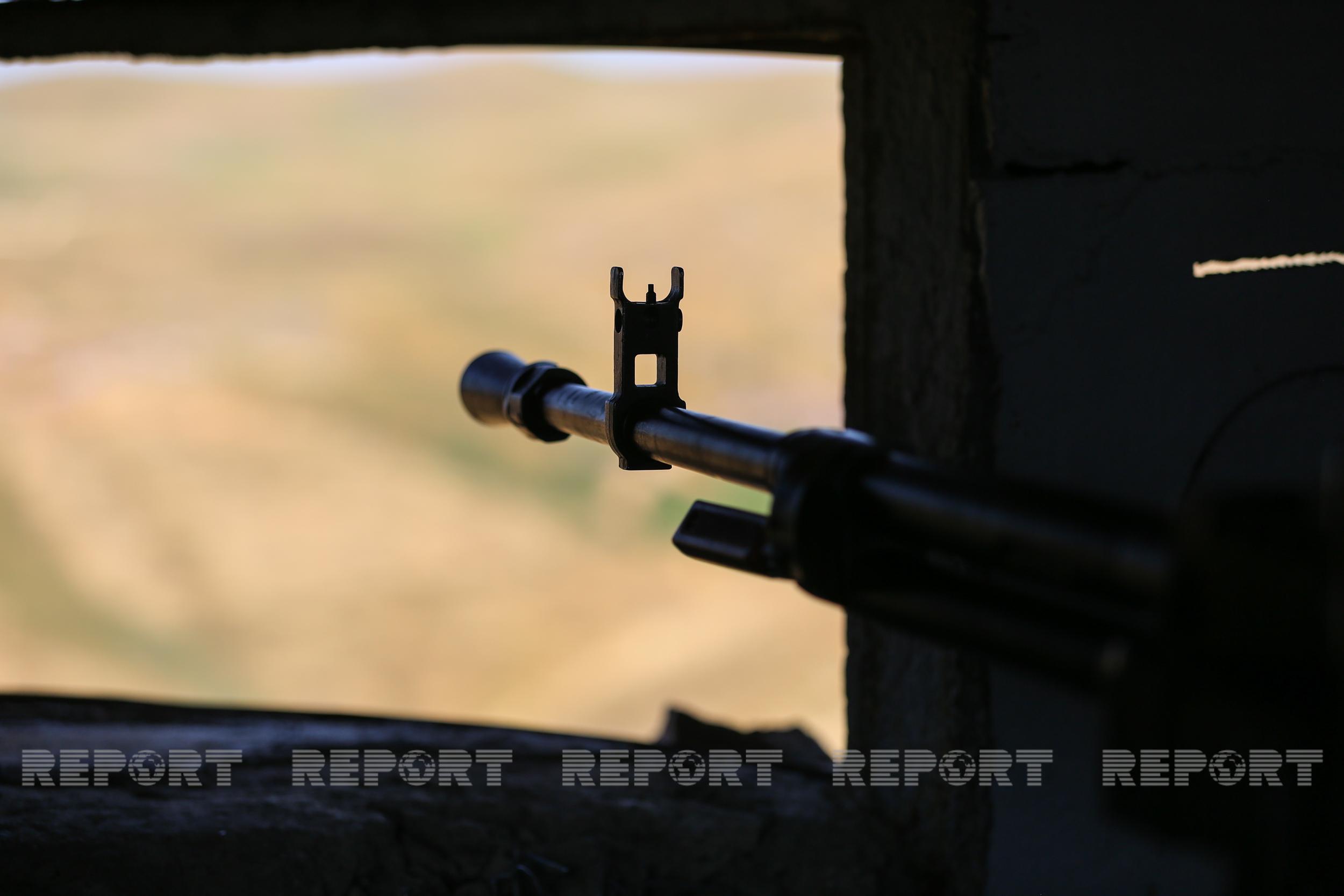 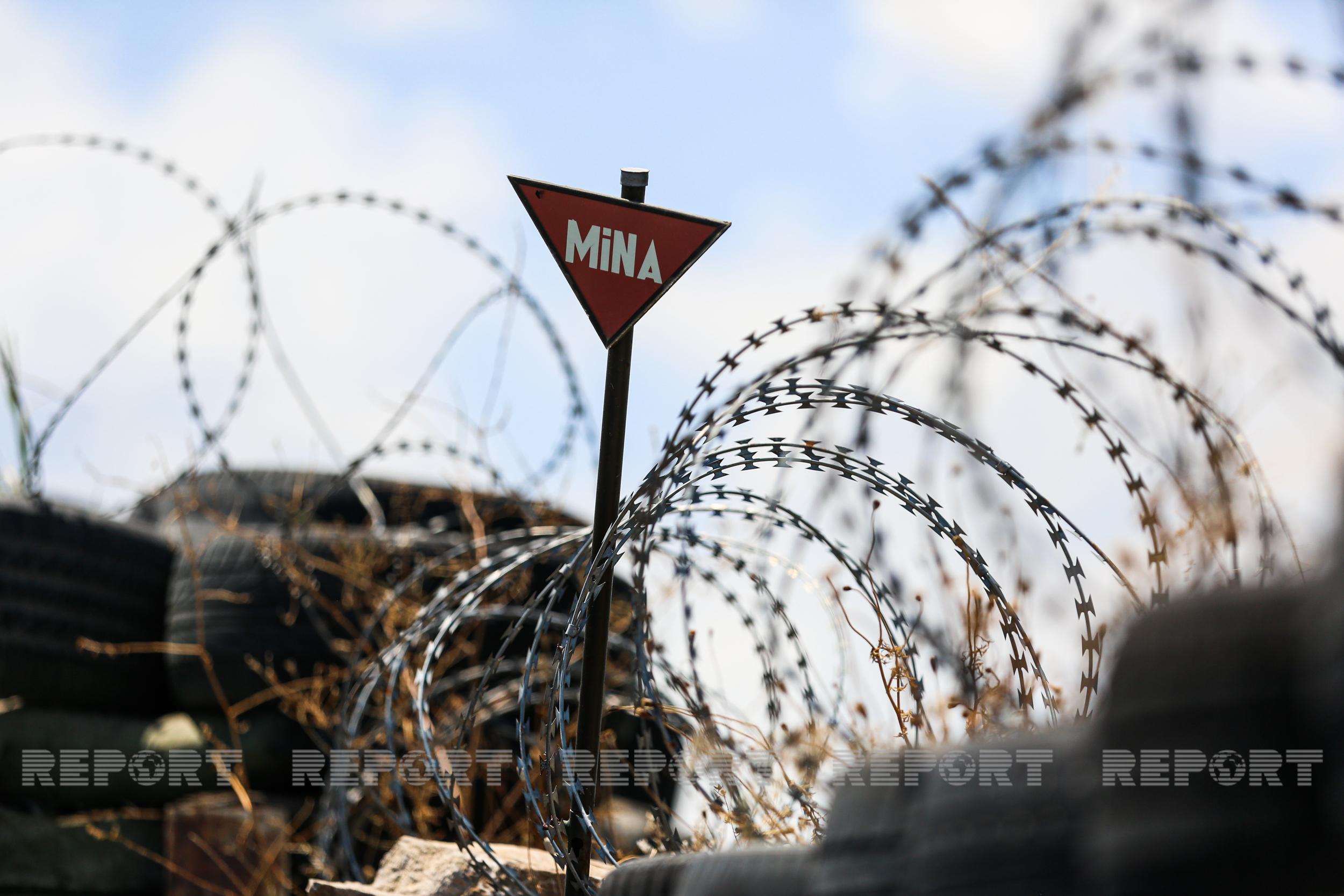