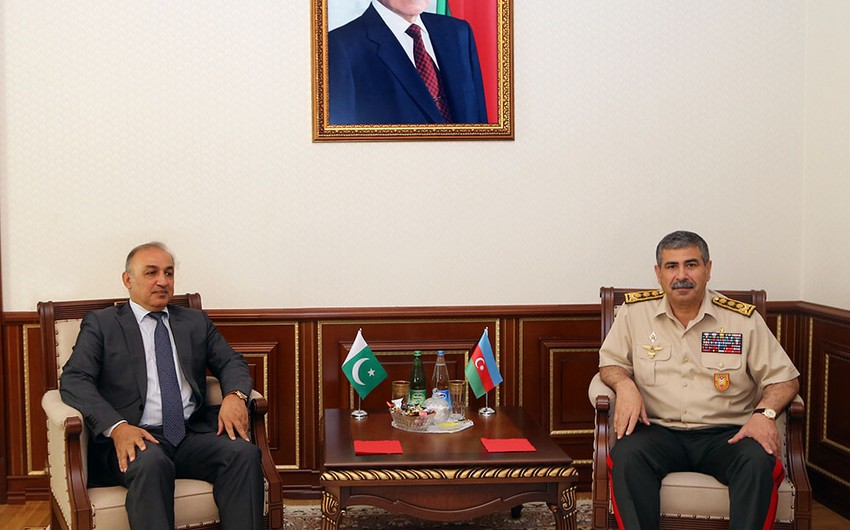 Baku. 28 July. REPORT.AZ/ Minister of Defense of the Republic of Azerbaijan, Colonel General Zakir Hasanov has met with the Ambassador Extraordinary and Plenipotentiary of the Islamic Republic of Pakistan to Azerbaijan Saeed Khan Mohmand on July 28.

During the meeting, in which the importance of mutual visits in the development of relations between our countries was emphasized, it was noted that cooperation in the military, military-technical sphere and in the field of military education is also successfully developing.

Noting that military relations are in the interests of both countries, the sides have considered it important to intensify efforts in this area. Highly appreciating the projects implemented within the framework of military-technical cooperation, the parties noted the significant role of the Super Mushshak aircraft purchased in Pakistan in improving the combat skills of Azerbaijani military pilots.

Colonel General Z. Hasanov expressed his gratitude to the Colonel Syed Imran Ali for the efforts made in the sphere of expanding relations between our countries during his activity in Azerbaijan and wished him success in his future activities.

Congratulating the new military attaché in connection with the beginning of the military-diplomatic mission in Azerbaijan, the Minister wished him success in the development of relations between the Armed Forces of the two countries.