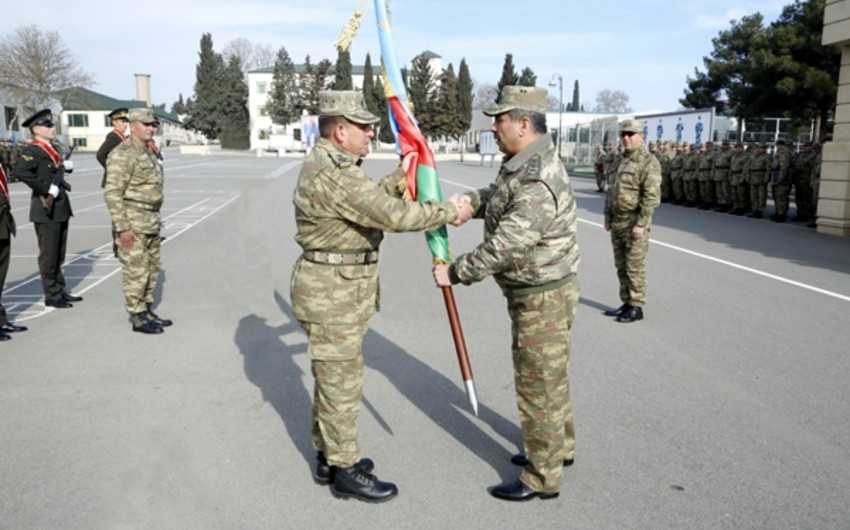 According to the report, the leadership of the Defense Ministry laid flowers at a monument of Azerbaijani national leader Heydar Aliyev, erected in the territory of the military unit and honored his memory.

Then, the Defense Minister presented the battle flags, given to the military units, to the commanders in accordance to the order of the Supreme Commander of the Armed Forces Ilham Aliyev.

Speaking at a ceremony, the unit commander, Lieutenant General Rovshan Akbarov thanked for the special confidence to the military units given by the command of the country's leadership and the Ministry of Defense.

Defense Minister, Colonel-General Zakir Hasanov congratulated the staff on the occasion of this momentous day and said:

"Today, the battle flags were presented to your military units. I congratulate all of you on this occasion. The battle flag is a symbol of honor and glory of the military unit. We want our battle flags to wave in the inseparable part of Azerbaijan, Nagorno-Karabakh after winning all fights with honor and liberating all our territories. We are confident and believe it!

Today, our Armed Forces hold combat trainings in such a high level that enemy is afraid and terrified. Our worthy response to the enemies make the discipline in their army deteriorate and the personnel avoid their service in the occupied territories.

We would like to emphasize that today our brave soldiers and officers on the frontline decently respond to the enemy . The failed operations of the enemy result in huge losses that causes problems in the army of the enemy, generally in Armenia.

We reiterate that we will release our lands in a short time. Mr. President specially emphasized: "We never allow to establish the second Armenian state on the territory of Azerbaijan. If an Armenian soldier does not want to die you do not want to die then not to come to Aghdam or Fizuli. Otherwise, the result will be even heavier than it."

Today, I appreciate combat service activity of your military unit and I am absolutely sure that you will fulfill all the tasks ordered you at the highest level in the future as it was till now. I congratulate you once again and wish you success in your service. "

At the end of the ceremony, military units solemnly marched past the tribune.