Founded in Kyiv in 1943, during the Second World War, when part of Ukraine remained under the control of German fascists, this military museum was considered the first museum in the former USSR that exhibited war trophies obtained from the Germans in the liberated areas.

Report's Eastern Bureau has prepared a photo essay from the museum complex, now called the National History Museum of Ukraine, which features World War II. It displays artifacts from the Donbas war waged for sovereignty in eastern Ukraine.

While the number of such military museums about the Second World War increased in many parts of the world, the mentioned museum in Kyiv differed in originality and its historical path. It hosted the first large-scale exhibition in 1946 with the participation of the world media. Although the museum expanded the area and exhibits after the war, in 1954, the USSR leadership closed it for some time. However, in 1974 the museum opened its doors to the public again, offering a broader presentation. Initially known as a military museum, the site was so popular that the Soviet leadership built a memorial complex near it in the Pechersk district of Kyiv and named it a state-museum complex. The first opening in this status took place in 1981. The purpose of the museum-memorial complex is to demonstrate to the new generation the consequences of World War II, fascism, and its defeat by heroic Soviet nations. The museum complex is considered the largest complex in the former USSR, with the total number of its exhibits standing at around 400,000.

During Ukraine's independence - in 1996, by order of the President of Ukraine, the museum complex was given the status of a center for national wealth and scientific research. In 2015, the Ukrainian leadership changed the museum's name to the "The National Museum of the History of Ukraine in the Second World War. Memorial Complex." 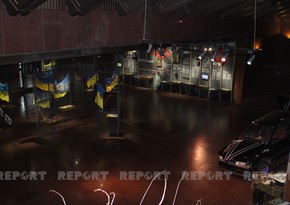