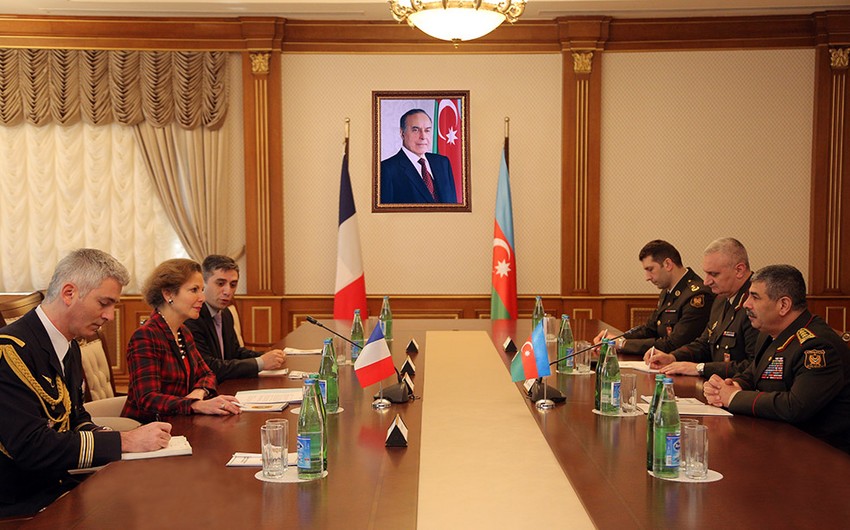 Baku. 10 March. REPORT.AZ/ Minister of Defence of the Republic of Azerbaijan, Colonel General Zakir Hasanov met with the Ambassador Extraordinary and Plenipotentiary of the French Republic to Azerbaijan, Mrs. Aurelia Bouchez on March 10.

During the meeting, issues of strengthening military relations between Azerbaijan and France, military-political situation in the region, the problems of international and regional security, as well as prospects for development of cooperation were discussed.

Informing the diplomat about the current situation on the line of confrontation of troops, the Defense Minister stressed that Armenia's destructive position on the settlement of the Nagorno-Karabakh conflict creates a serious threat to regional security. The Minister emphasized that the solution of this issue is to compel Armenia to fulfill the requirements of the well-known resolutions of the UN Security Council within the framework of norms and principles of international law.

Colonel General Z.Hasanov, noting the importance of bilateral relations in the sphere of defence, highly appreciated the current state of cooperation between Azerbaijan and France in the military and military-technical spheres, as well as in the field of military education.
In turn, A.Bouchez, noting France's interest in implementing joint projects with Azerbaijan in the defense sphere, stressed the importance of these programs.

The sides have also discussed projects implemented in Azerbaijan by a number of French companies manufacturing military products, as well as other issues of mutual interest in the field of defense and security.