Defense Minister: Military budget increased more than 20 times "The issuance of military compensation will be carried out as far as while funds to be allocated" 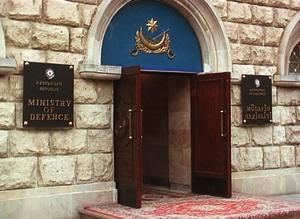 Baku. 24 June. REPORT.AZ/ "A new draft has been already prepared, which defines the rights and responsibilities of the military servants and refers as a main legal act of the law of Azerbaijan" On status of servicemen." The document includes a number of points in order to improve social and legal security of servicemen and their families, retired people and retired servants."

He recalled the adoption of the relevant decision of the Cabinet in order to pay compensation next holidays, which not used by retired persons and servants, retired from the armed forces of Azerbaijan: "According to the decision, the Ministry of Defence approved the rules for the payment of compensation. The process will be implemented in stages, due to relevant allocation of funds."

The Minister said that in the framework of conducted reforms in the Armed Forces were drafted documents that allow to fulfill the established statutes and regulations of the rights of the commanders of military units: "Also has been developed a new draft strategy, concerning the development of the defense capacity of the country proposals that include in the National Security Concept. In recent years, Azerbaijan's military budget increased more than 20 times.