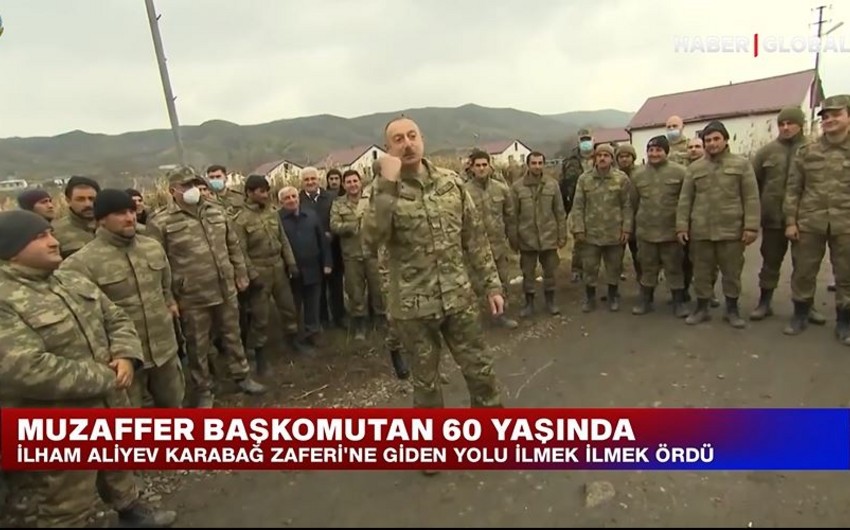 According to Report, the material tells about the path of Victorious Ali Commander-in-Chief to the Karabakh Victory:

"Ilham Aliyev, the architect of the Karabakh victory, the first Supreme Commander-in-Chief of Azerbaijan liberating the land in the last few centuries, a politician and a leader who built his strategic plans years ago and implemented them when the time came, is celebrating his 60th birthday today.

The reportage says that Ilham Aliyev is one of the charismatic leaders who is always open to innovation, is self-confident, risk-taking, never backsliding from his realities, devoting all his self to the struggle he believes in, and taking radical measures in times of crisis:

"He doesn't like to talk about his plans, he simply works. With patience, perseverance, sometimes for years.

"Only after the glorious victories during the war did the people and the world realize that they were stepping on the path to the victory in Karabakh. It was challenging to be the President of Azerbaijan, which had an unresolved Karabakh knot. The burden on his shoulders was heavy. He had to do the impossible. Preparations for this began many years ago. Sometimes openly, sometimes secretly. In order to maintain the army that would liberate Karabakh, he first strengthened the economy and paid special attention to military education. Sound international relations were needed for the liberation of Azerbaijani lands through war, if not through dialogue. Ilham Aliyev took all necessary measures and created a robust political background. He developed a strategy to prevent the creation of an international front against Azerbaijan. One of the results of Ilham Aliyev's diplomatic skills was Russian President Vladimir Putin's statement during the war that 'Nagorno-Karabakh is the an Azerbaijani land.'"