One year passes since liberation of Khudafarin Bridge

One year passes since liberation of Khudafarin Bridge Today, October 18, is the day when the ancient Khodaafarin Bridge in the Jabrayil region and the surrounding areas were liberated from the occupation of the Armenian Armed Forces. 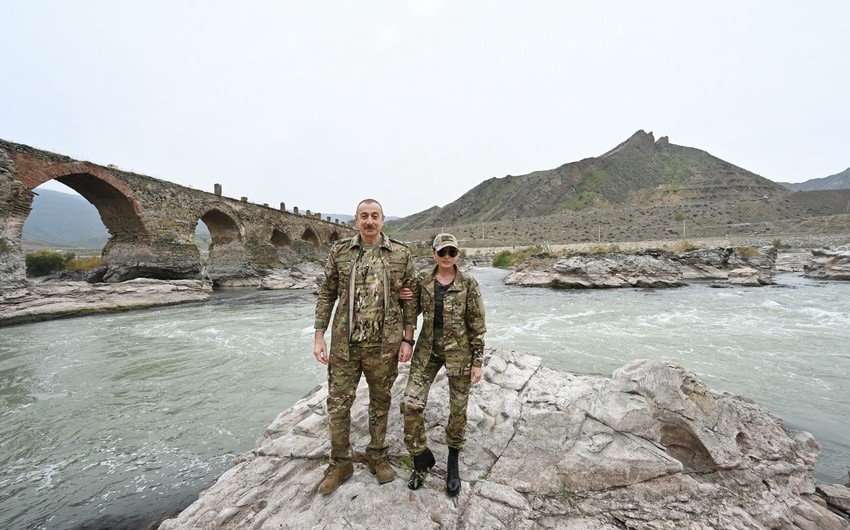 Today, October 18, is the first anniversary of the liberation of the ancient Khudafarin Bridge in the Jabrayil region and the surrounding areas from the occupation of the Armenian Armed Forces, Report mentions.

On October 18, 2020, Azerbaijan cleared the bridge over the Araz River on the Iranian border from Armenian aggressors. Along with Khudafarin, two other settlements of the Jabrayil region - Hajili and Haji Isaqli village were released from the occupiers.

The glorious tricolor flag of Azerbaijan was hoisted in the liberated territories. 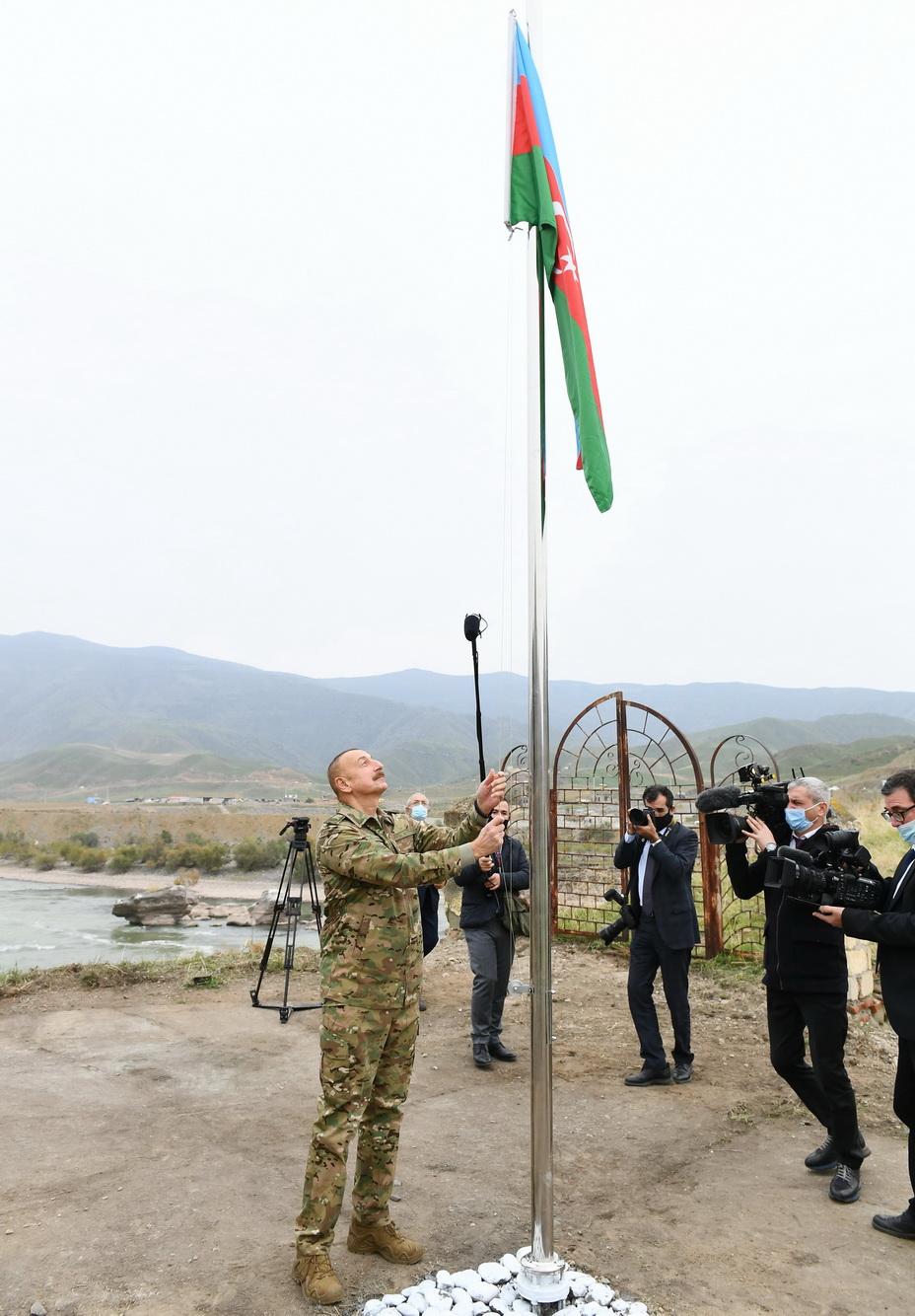 The 11-arched Khudafarin Bridge built in the style of the Azerbaijani school of architecture is the remains of an 11th-12th century bridge over the Araz River on the Iran-Azerbaijan border. The bridge is made of stone and covered with well-carved large stone slabs. Researchers believe that it was rebuilt on the remains of an ancient bridge in the 13th century, during the reign of the Elkhanids (Hulakus). The bridge is about 130 meters long, 6 meters wide, and 12 meters high above the river level. At present, three middle arches have endured, and the coastal arches were destroyed by the decision of the USSR in the 30s of the XX century.

Khudafarin with fifteen arches dates back to the 13th century. According to Hamdallah Qazvini, it was built in the fifteenth year of the Hijri calendar (639 CE) by Abdullah ibn Bakr, a close ally of the Prophet Muhammad. As the supports of the bridge arches rise on natural grounds - rocks, the crossings are of different sizes and freely arranged. The bridge, built of baked bricks and river stones, is about 200 meters in length, 4.5 meters in width, and 12 meters high above the river level.

Detailed information about Khudafarin Bridges over the Silk Road can be found in historical sources. These bridges witnessing history played an important role as a means of communication in ancient and medieval times and were the main hub of the migration route of the Azerbaijani lands from the south to Karabakh. 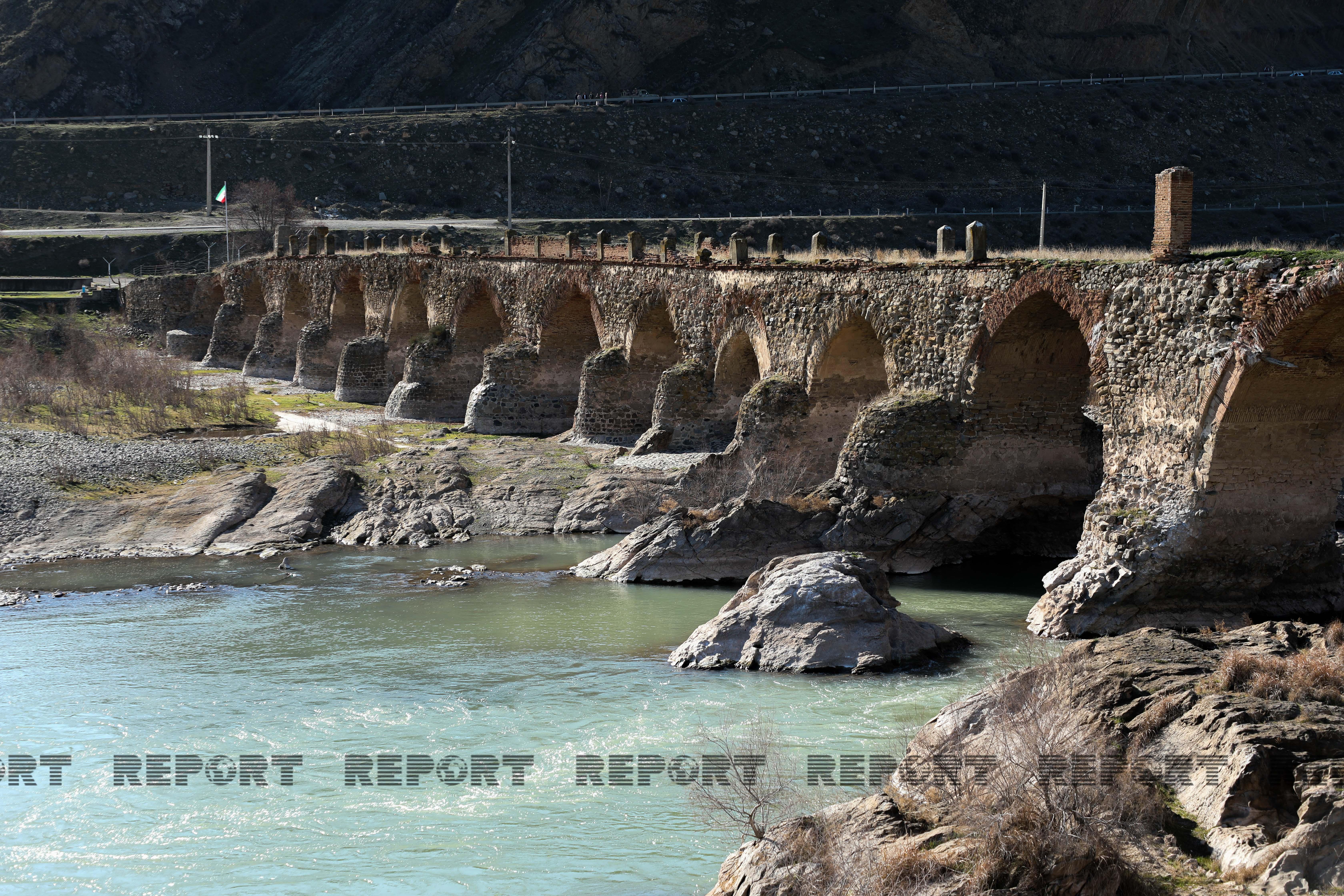 Historically, Khudafarin bridges connecting the north and south of Azerbaijan are also considered symbolic monuments. This magnificent monument of the Azerbaijani school of architecture has attracted the attention of many historians around the world. Khudafarin bridges are one of the best examples of Azerbaijani architects' exceptional engineering skills. According to many researchers, it is called "Khudafarin" because the supports of the bridges are built on natural rocks in the middle of the river. These bridges have played a significant role in the development of Azerbaijan's economic and cultural ties with India, the Middle East, Russia, and Western Europe.

Twenty-seven years later, the Azerbaijani flag was hoisted on Khudafarin in the Jabrayil region, occupied by the Armenian armed forces in 1993. Having achieved brilliant victories in Karabakh, the victorious Azerbaijani Army returned this valuable monument to us - true owner. Thus, October 18, 2020, was written in our history as another glorious day.

At present, the construction of Khudafarin and Maiden Tower hydro junctions and hydroelectric power stations on the Araz River is underway. 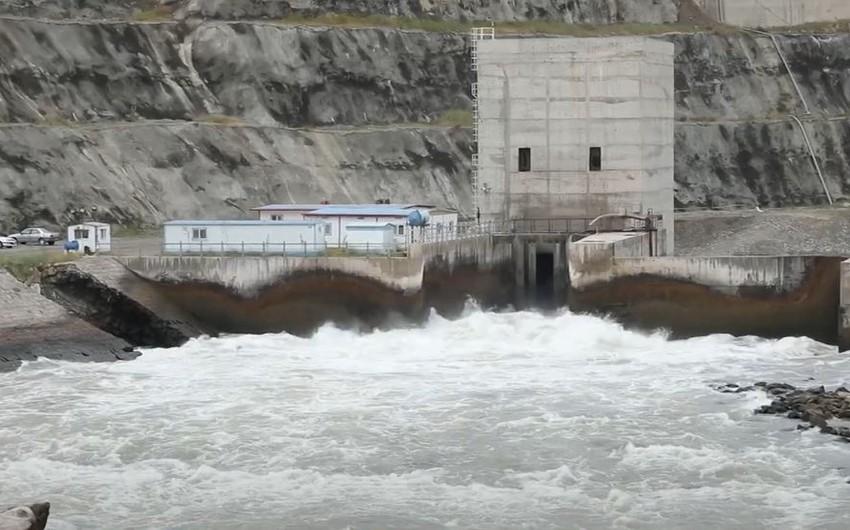 Six days after Azerbaijan's victory over the enemy in the Patriotic War, on November 16, 2020, President Ilham Aliyev and First Lady Mehriban Aliyeva visited the liberated Jabrayil region. The President raised the glorious Azerbaijani flag in Jabrayil and Khudafarin Bridge. The raising of our flag by the President on the historic Khudafarin Bridge is a source of pride for the people of Azerbaijan. Khudafarin, which was engraved in the history of our people, was also a matter of national pride.

Upon the relevant decrees signed by President Ilham Aliyev on December 24, 2020, and June 24, 2021, a group of servicemen was awarded the "For the liberation of Jabrayil" medal. Tens of thousands of servicemen who demonstrated personal courage and bravery by participating in the military operations for the district's liberation, including the Khudafarin Bridge, were awarded the medal "For the Liberation of Jabrayil."