​Meeting with the Head of NATO Liaison Office to South Caucasus was held Mr. William Lahue has been presented material reflecting the reality of recent incidents 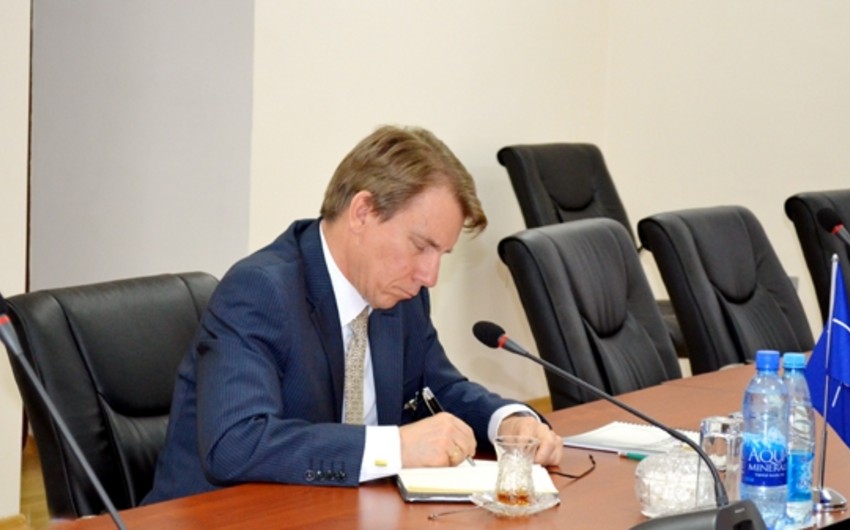 Baku. 15 April. REPORT.AZ/ The Head of the NATO Liaison Office to South Caucasus, Mr. William Lahue has been informed on provocative actions of Armenian units, conducted from 01 to 07 April 2016, towards Azerbaijan citizens and settlements along the line of confrontation. The event took place at the Department of International Military Cooperation of Azerbaijani Defense Ministry.

Report was told in the press service of Ministry of Defense, during the briefing the Head of the NATO Liaison Office has been presented the information based on real facts about massive damages caused to local infrastructure as well as dead and wounded civilians in Azerbaijan residential areas that were victims of constant suppressive fire of Armenian units' heavy weapons.

In addition, the information has been given on the responsive measures and necessary security actions taken by Azerbaijani Armed Forces in different directions of the front line in order to prevent Armenian provocative actions and protect civilians.

Meanwhile, Mr. William Lahue has been presented material reflecting the reality of recent incidents and the facts proving the falsification of Armenian disinformation, as if aggressive actions were committed by Azerbaijan servicemen against Armenian population, which was also a part of Armenian information war against Azerbaijan.

At the end of the meeting questions of the Mr. William Lahue were answered.