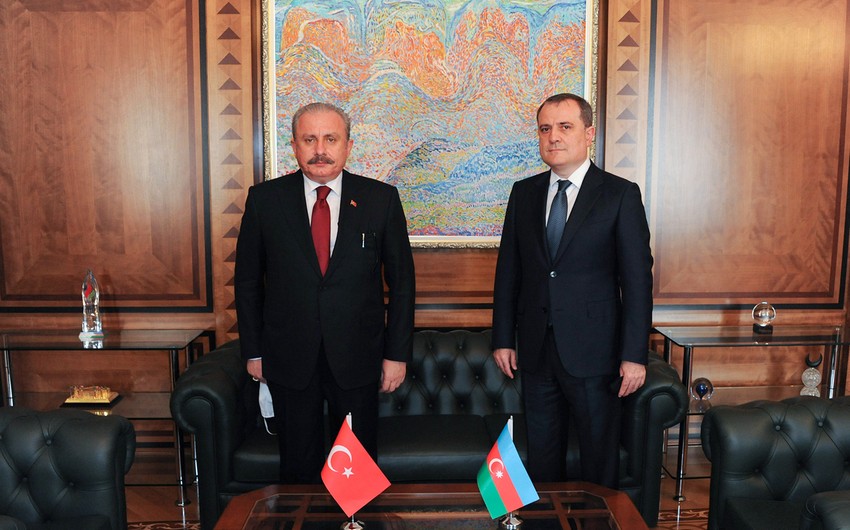 On October 20, Azerbaijani Foreign Minister Jeyhun Bayramov met with a delegation led by Speaker of the Turkish Grand National Assembly Mustafa Şentop, who is on an official visit to our country, Report informs, citing MFA.

Welcoming the Turkish guests, Bayramov noted the importance of relations between the two countries and the successful development of high-level ties in all fields, saying that the visit would contribute to mutual cooperation.

The Minister praised the Azerbaijani Armed Forces counterattack operations in response to Armenia's next military provocation and the support provided by brotherly Turkey to Azerbaijan, including the backing of the President of Turkey at all levels, as well as the Grand National Assembly.

Mustafa Şentop said that his visit to Azerbaijan was planned in advance, but it was of particular importance against the background of the events. Stressing that Turkey has always stood by friendly and brotherly Azerbaijan, he stated that the Nagorno-Karabakh region is both historically and legally Azerbaijani territory, and thus Azerbaijan's rightful position is based on international law.

Speaker stressed that Armenia's recent attacks, especially its targeting of civilians, are a source of danger not only for Azerbaijan but for the entire region. He emphasized that Armenia aimed to expand the conflict's geography and involve third countries in the dispute by firing on cities and civilians far from the frontline. According to him, Turkey is against Armenia's aggressive policy and is committed to ensuring peace and security in the region. Besides, his country will support Azerbaijan's fair position to the end.

Jeyhun Bayramov thanked Mustafa Şentop. He expressed confidence that the high-level partnership between Azerbaijan and Turkey would guarantee peace, security, and prosperity.