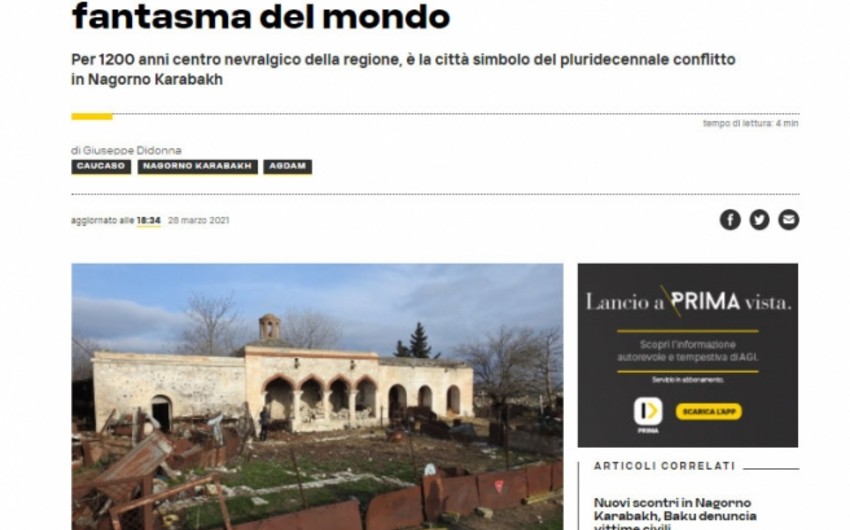 According to Report, the article was written based on the visit of journalist Giuseppe Didonna to Agdam and what he saw there: "The city, which has been an important center of the region for 1,200 years, has become a symbol of the Karabakh conflict, which has lasted for decades."

The author of the article, which includes photos featuring the current state in Aghdam, writes: "Looking at the gruesome view of Aghdam, called the 'Caucasian Hiroshima,' you can't believe that 60,000 people lived in this city, which was founded in the 8th century. It is unimaginable that Karabakh, one of the most famous football clubs in Azerbaijan, once played in this city."

In his article, Didonna describes the devastating situation in Aghdam. He writes that now everything in Aghdam is reminiscent of the war.
There is no sign of life. There is nothing left in the city except the Drama Theater's facade and two mosques, where pigs were kept.

The cemeteries in Aghdam were systematically looted. Soldiers, armed groups, and mercenaries dug up the bodies and destroyed the graves to steal the gold teeth of the dead.

The author touched upon the strategic importance of Aghdam. He said that this very factor made the city the center of the war between Armenia and Azerbaijan, which began in 1992. Noting that the city center of Aghdam is excluded from active combat operations, the author says that Armenia destroyed the Aghdam and turned it into the world's largest "City of Ghosts" in the following years.

The city of Aghdam, which had been inaccessible to official Baku for many years, was returned to Azerbaijan after the Second Karabakh War, and journalists were allowed to enter the city. Today, the 'Caucasian Hiroshima' is a heartbreaking scene where life is impossible, not because of the spread of chemicals, but because of the thousands of mines scattered everywhere.

The author notes that though no hydrogen bomb exploded in the 'Caucasian Hiroshima,' the war led to the same devastation and highest triumph of death over life, which resulted from ethnic and religious hatred.