How did the Hero of the Patriotic War survive ambush of Armenians? – INTERVIEW 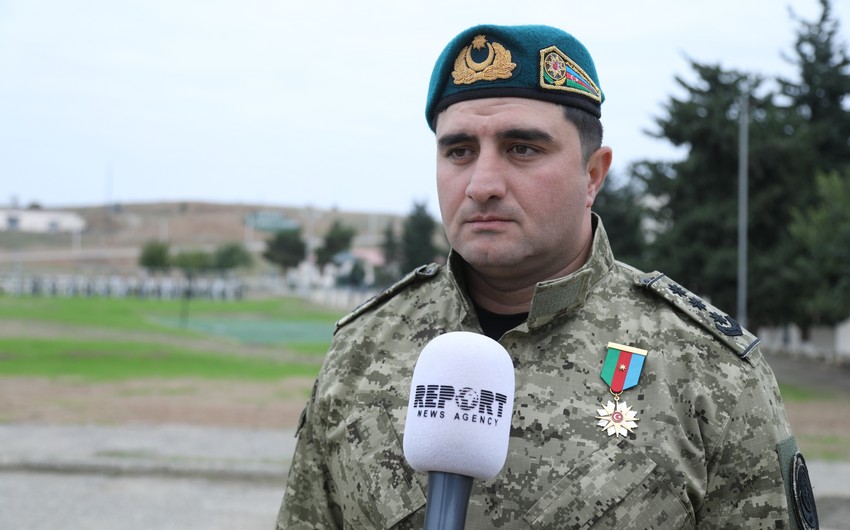 Officer of the State Border Service (SBS), Hero of the Patriotic War, Colonel Babak Alakbarov has responded to questions of Report correspondent, dispatched to Jabrayil District:

Babak Mursal oglu Alakbarov was born on December 24, 1987, in Jeyranbatan settlement, Absheron District. He finished secondary school in the same settlement. In 2003-2006, he studied at the Jamshid Nakhchivanski military lyceum. In 2006-2010, he studied at the Border Troops Faculty of the Heydar Aliyev Academy of the now-defunct National Security Ministry and completed his military education in the rank of a lieutenant, and joined the military service in the Border Troops Rapid Reaction Forces.

Azerbaijani President, Supreme Commander-in-Chief Ilham Aliyev, and the chief of the State Border Service awarded him numerous orders and medals.

- What combat missions were set for the SBS during the war?

- On September 27, 2020, to prevent the large-scale provocation, launched by the Armenian armed forces against Azerbaijan, the military operation, codenamed Iron Fist, was launched under the leadership of President, Commander-in-Chief of the Armed Forces Ilham Aliyev. All our forces and means were fully mobilized to fulfill the tasks set for the State Border Service in the Patriotic War. From the onset of the clashes, the Azerbaijani border guards have liberated large swathes of areas from the line of contact in Fuzuli to the state border with Armenia, destroying hundreds of the enemy servicemen by inflicting crushing blows through lightning war strategy.

Border guards, who displayed courage and bravery in liberating Fuzuli, Jabrayil, Zangilan and Gubadli districts, Hadrut settlement, and Shusha city, mounted our national flag on the ancient Khudafarin Bridge, in Agband settlement of Zangilan District and Zangilan city, liberated Bartaz and Shukurataz strategic heights from the clutches of the enemy on the state border with Armenia. 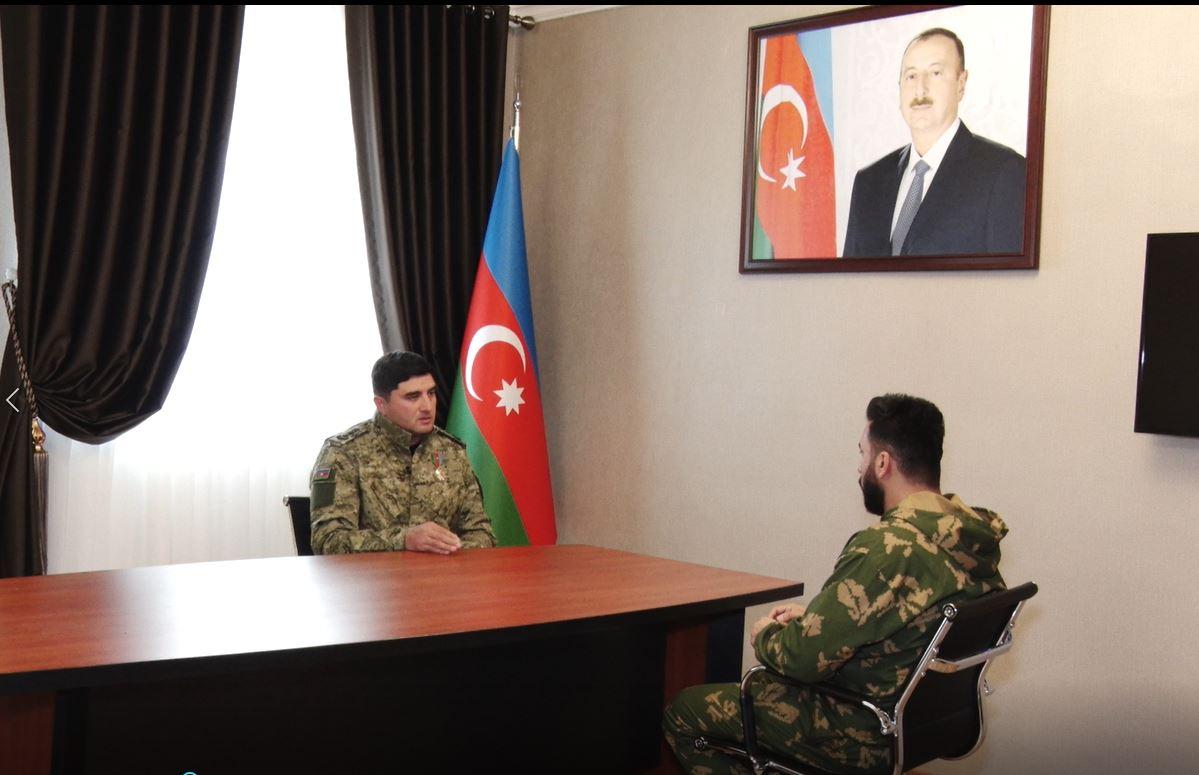 - How do you remember the battles for the liberation of the Khudafarin Bridge and the surrounding areas?

- In addition to being of great strategic importance, the Khudafarin Bridge was one of the most important points in the battles for the liberation of Karabakh. Thus, Khudafarin village, located near the bridge, is one of the last villages of Jabrayil. Then comes Zangilan and Gubadli districts. In this regard, the successful implementation of the task of liberating the Khudafarin Bridge was of particular importance. According to the operation plan, infiltration was carried out along the Araz River into the enemy’s rear, an ambush was set up and thus the enemy forces could not withstand the combat readiness and professional training of our personnel and retreated after suffering heavy casualties. We managed to capture the strategic height in the area. Thus, the Khudafarin Bridge was liberated, our national flag was hoisted, and a report was made to the Commander-in-Chief of the Armed Forces, Mr. Ilham Aliyev.

- As you said, the Khudafarin Bridge and surrounding areas were of strategic importance. Did you sustain losses when you ambushed the enemy, and how many losses did the enemy sustain?

- After the liberation of the Khudafarin Bridge, our forces moved in the direction of Zangilan, one after another, ensuring the liberation of our territories and border posts from the enemy's footsteps along the state border with Iran. Within 24 hours, we covered a distance of 105 km and entered the city of Zangilan, where we conducted the combing and cleansing operation in the city and our groups were stationed on surrounding heights. The next day after the liberation of the city, heavy fighting broke out while preventing the enemy's counterattack. Despite the martyrs and wounded among the personnel, the enemy was not allowed to take a single step forward, the enemy retreated with heavy casualties, and the survivors tried to save their lives by crossing the Oxchucay River. 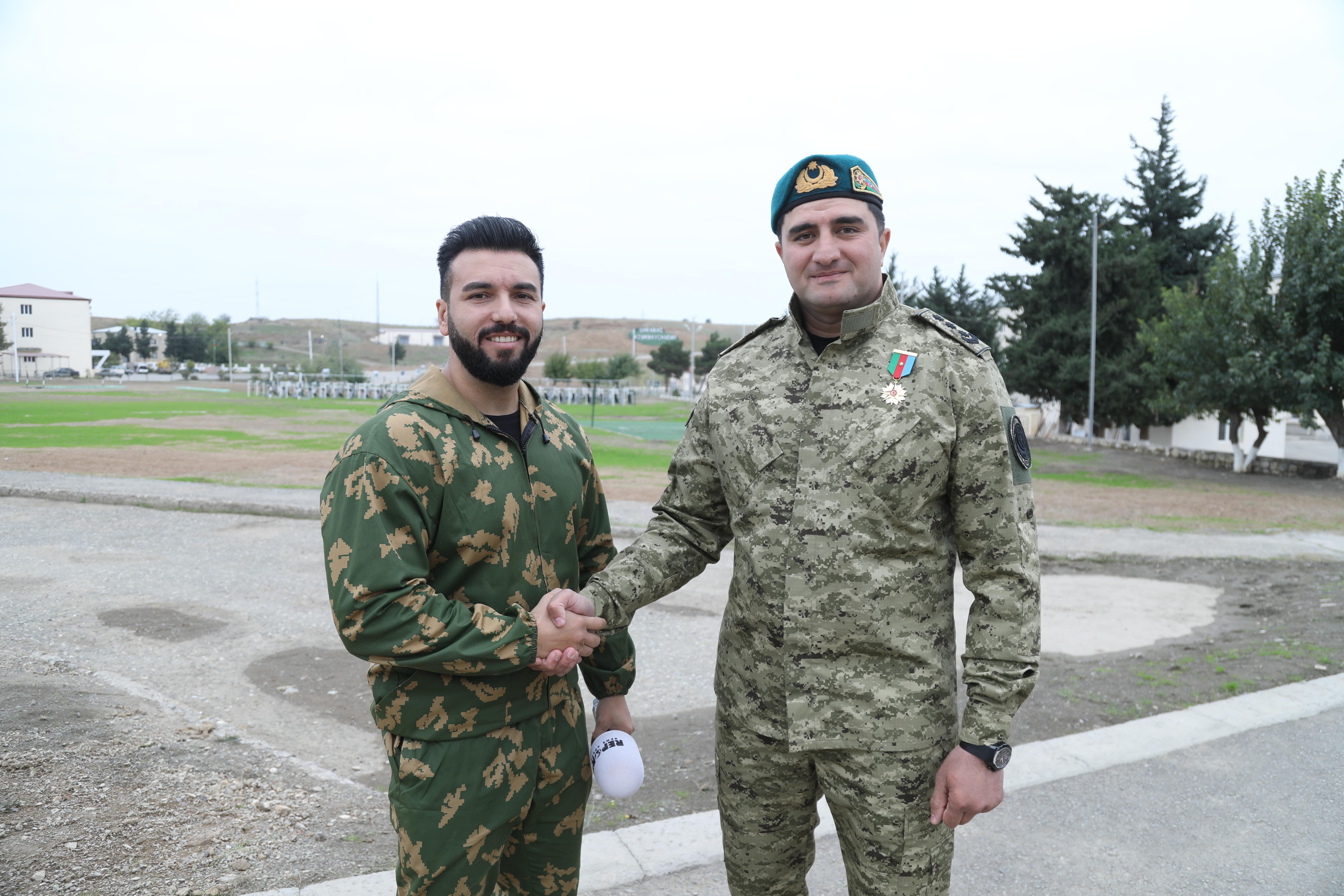 - Where were your most difficult clashes?

- The enemy repeatedly tried to counterattack to retake almost all the liberated territories, heights, and settlements but failed to achieve their goal.

After the liberation of the settlement of Hadrut, we had heavy battles when the enemy's attempts to retake this settlement were repulsed. The Special Forces of the State Border Service, together with the servicemen of other units of our Armed Forces, showed heroism and bravery in the battles, inflicting heavy defeats on the enemy and causing numerous casualties among its personnel.

The next day after the liberation of the city of Zangilan, heavy fighting took place to prevent the enemy's counterattack. The liberation of the Three-Point Height in Agband settlement can be considered as one of the hardest battles. The height is a very strategic area to control both the communication roads in Azerbaijan and the Meghri road in Armenia.

Although the enemy was deeply entrenched in the area and was supported with large-caliber weapons and mortars to hinder the advance of our units and military equipment, our special forces took the strategic height with the support of attack drones. Despite the enemy's repeated counterattacks and relentless artillery fire to capture the heights, our heroic border guards successfully fulfilled the task of maintaining the position, preventing the provocation of the enemy. In these battles, there were those, who died heroically and were wounded among our border guards.

- As the saying goes, when soil is mixed with water, it becomes mud, when it is kneaded with blood, it becomes the fatherland. Of course, we sustained losses in the war. May our martyrs rest in peace. The loss of which comrades-in-arms made you feel you lost part of your heart?

- The martyrdom is the highest and most sacred peak. Martyrdom is the embodiment of endless love for the Fatherland, sacrificing one's life for the Fatherland. Martyrdom is the peak of honor, zeal, and greatness. Not everyone is fortunate enough to reach this peak, to rise to this point. All our martyrs are holy for us. The loss of Yusifli Azar affected me the most. I will never forget him, as he was quick; he lowered the Armenian flag from their office building and put on our glorious tricolored flag. Azars, Maliks, Elchins, Muhammads, Miraghas, Ashurs, Tofiqs, Xudayars are our martyrs. May God have mercy on them. 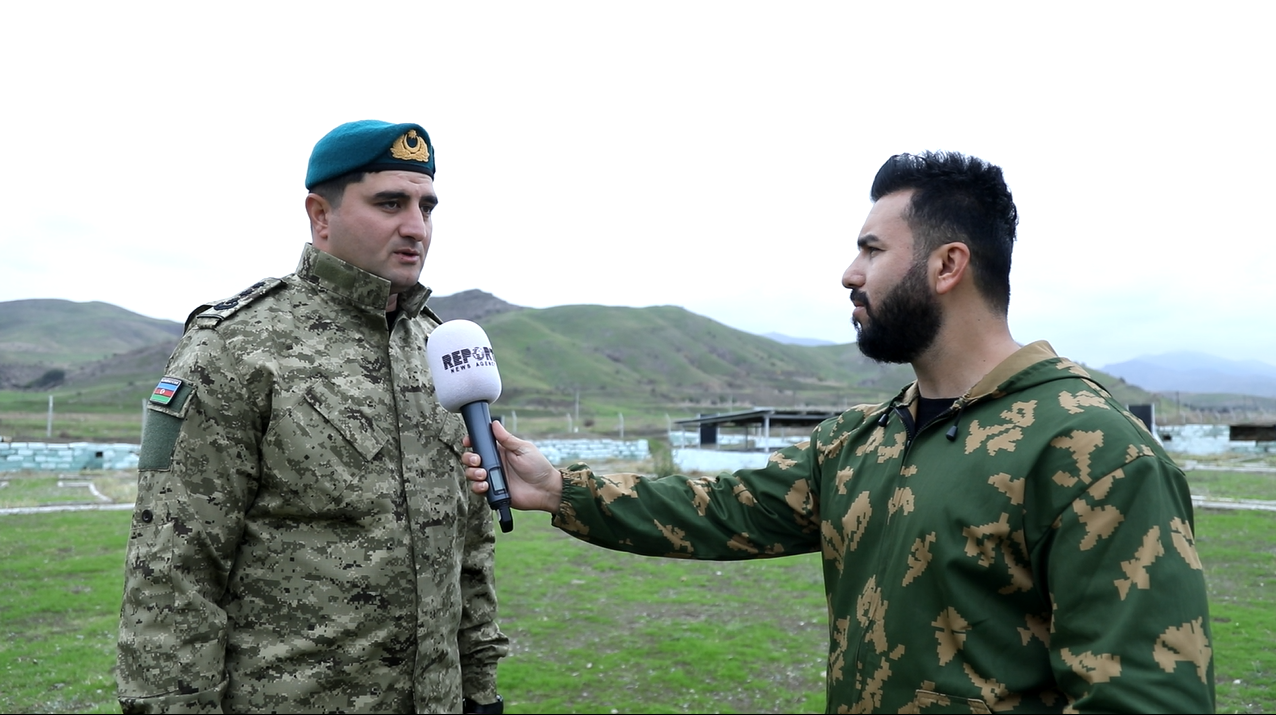 - The Armenian media and fighters also admit that although Azerbaijani soldiers lost their arms or legs, they continued clashes without putting down their weapons. You continued to fight, despite being seriously wounded. What was the main factor that inspired strength in you?

- This strength emanated from Khojaly, from the lands for which we craved for 30 years; it was the strength of our values and the power of our victorious army. We were waiting for the order of the Supreme Commander-in-Chief for a long time. You are right, I was wounded during the fighting. I was wounded while running after retreating Armenian soldiers. So, when the enemy retreated, they ambushed me in one of the ruined houses, but the ambush turned out not as they planned but as I wanted. Although I was wounded when one of the Armenian soldiers fired at me, I managed to kill him. After an initial medical examination, I continued the fight. Not only me but also my heroic comrades though were heavily wounded, but they continued fighting to chase the enemy like a dog. Even though evacuation teams were waiting for them to evacuate, my brave brothers did not leave the battlefield.

- You reported to Supreme Commander-in-Chief Ilham Aliyev on the liberation of Zangilan and Khudafarin Bridge from the enemy. How did you feel at that moment?

- It was a great responsibility and a great honor to report to the Supreme Commander-in-Chief on the liberation of our lands, which had been under enemy occupation for almost 30 years. The mounting of the Azerbaijani flag on the Khudafarin Bridge, which is a national, historical, and cultural treasure of our people and a symbol of unity and solidarity, was also a restoration of historical justice. When I hoisted our flag there as was tasked, I did not know that my report would be broadcast on all state TV channels. At that moment, I was driven by an idea to wave our glorious tricolor flag in all our liberated lands. Thankfully, thanks to our Victorious Supreme Commander-in-Chief and our army, we have achieved this goal. 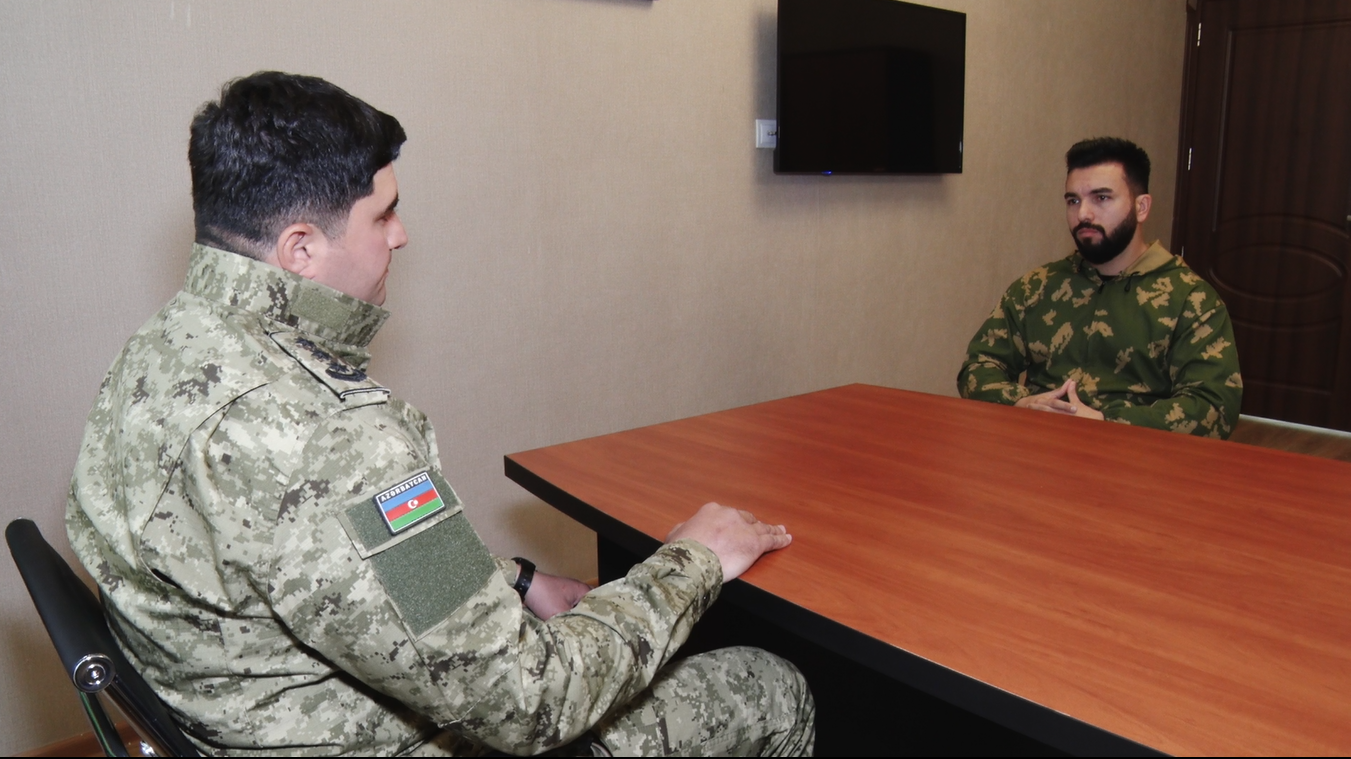 - You liberated a large area from the enemy with minimal losses. How did you achieve this?

- The liberation of the territories within a short time, where a strong defense and fortification system had been established for about 30 years, is an indicator of the strength of the Azerbaijani army. Today, the attention and care shown to our army by President Ilham Aliyev are yielding successful results. As a result of the consistent and purposeful policy pursued, the level of military equipment of our Armed Forces, discipline, and fighting spirit are quite high. We, as the State Border Service, were conducting very powerful training. Our drills were mostly adjusted to the climatic conditions of Karabakh, which had a positive impact on the 44-day war.

I would like to underline an episode that most of our drills were attended by our Service Chief, Colonel-General Elchin Guliyev, and we even saw him in full uniform by our side. This encouraged us even further. All these factors led us to liberate larger territories from the enemy with minimum losses in the 44-day Patriotic War. I am very proud to be an officer of the victorious President, the victorious Army, and the victorious nation.