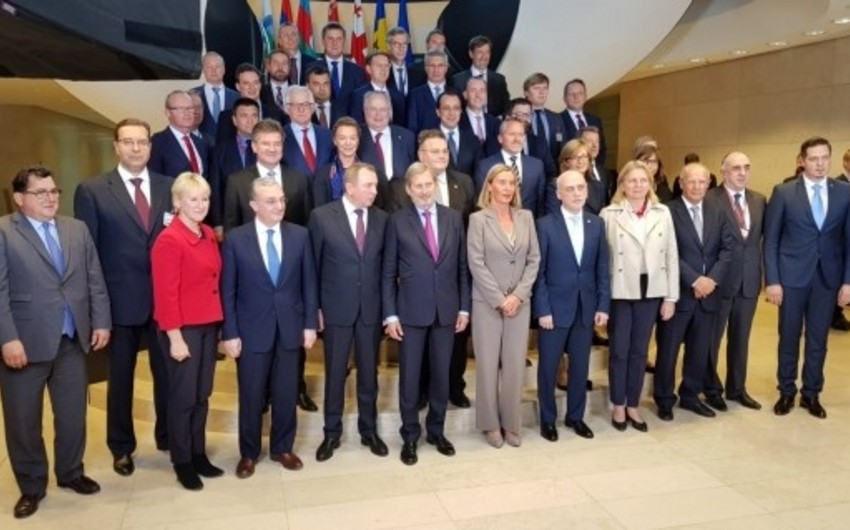 Baku. 16 October. REPORT.AZ/ True stabilization is unimaginable without settlement of protracted military conflicts which threaten the stability and cooperation in the EaP geography, Minister of Foreign Affairs of the Republic of Azerbaijan Elmar Mammadyarov said

Report informs that the Minister spoke at the Eastern Partnership Foreign Ministers’ Meeting on 15 October 2018 in Luxembourg.

"It serves me a great pleasure to be today here with you at this ministerial meeting. I hope it will give us an opportunity to exchange views on the state of play in our cooperation and highlight both achievements, as well as some areas where additional efforts could be made to boost our cooperation further. I would also like to express my gratitude to the host of today’s meeting – to Mr. Jean Asselborn, as well as to our colleagues from the European External Action Service and the European Commission for the organisation of today’s meeting and hospitality.

"Almost a year passed since the last EaP Summit in Brussels. That Summit proved that a cooperation within EaP should be based on realistic considerations of challenging situation in the region and focus on the benefits and potential value-added which EaP framework could bring. It led us to reshape the EaP architecture in the light of the past experiences and endorse “20 deliverables for 2020” document with concrete objectives to achieve. We believe that once implemented, those deliverables will have a potential to bring a greater degree of resilience, prosperity, development and connectivity to our region. And the success of this process will depend on tangible results, which could be reached in both bilateral and multilateral tracks of our engagement with partners form the EU.

"2018 has proved to be a productive year for advancement of our cooperation agenda with the EU. Adoption of the Azerbaijan - EU Partnership Priorities document is the very recent and important milestone in our bilateral relations. I believe this document will provide a necessary framework for our sectorial cooperation for 2018-2020. But we, when I say we it really means the EU, its member states and Azerbaijan, don’t want to stop there; our target is further, beyond 2020. We would like to operate in mid and long-term predictable environment with the EU.

"This year we also have moved further with our new Azerbaijan - EU bilateral agreement, which is set to be based on the principles of equal partnership and common interests. We continue our negotiations with a belief that this agreement will reflect the strategic spirit of our partnership.

"I would like to briefly touch upon our progress in achieving the goals of the 20 deliverables for 2020. Some of those goals are also in line with Azerbaijan’s strategic roadmaps on key sectors. Institutional and structural reforms are being continued in order to ensure a sustainable economic development and socio-economic growth in Azerbaijan. According to the first results of these reforms, the sustainability capacity of the economy has further increased.

"EU is still the main trade partner of Azerbaijan, taking a lion’s share of our foreign trade turnover (around 50%). EU has invested more than $15 billion to Azerbaijan economy in the last several years. There are more than 1,500 companies of EU origin which operate in Azerbaijan. A recent survey, done by the German-Azerbaijan Trade Chamber among those companies, shows an increased confidence in Azerbaijan’s economy and reforms implemented.

"The objectives of strengthening institutions and good governance have been standing high on the agenda of the Government of Azerbaijan and continuous efforts have been taken for their implementation. Here, I would like to mention the recent reforms on fair, transparent and merit-based selection of future civil servants, further enhancement of the authority and power of the Judicial-Legal Council of Azerbaijan, the installation of “Electronic Court” information system in court buildings and etc.

"It would be relevant to mention that in a recent report, the Council of Europe’s Commission for the Efficiency of Justice (CEPEJ) has highlighted Azerbaijan’s judge selection process for its transparency and objectivity. I also wish to inform you that the Council of Europe Action for Azerbaijan for 2018-2021 is to be adopted soon and its successful implementation will undoubtedly contribute to a further realization of above-mentioned objectives.

"On a trade front, connectivity features as a strategic dimension of cooperation in both bilateral and multilateral tracks of EaP. We continue to solidify our strategic partnership on energy through the implementation of the Southern Gas Corridor. An official ceremony marking the inauguration of the Southern Gas Corridor was held on May 29, 2018 at the Baku Sangachal Terminal. The ground-breaking ceremony for TANAP – a backbone midstream segment of the Southern Gas Corridor was held in June 12 in Turkey. Both landmark events were attended by some political leaders and senior-ranking officials from the EU and a wider Europe, including our friends from EaP. Trans-Adriatic Pipeline is in the final stage of construction. We support the development of a reliable network of interconnectors in the region. Therefore, we seriously think about and actually work on a gradual geographic extension of Southern Gas Corridor. It is not only about TAP project. We are confident that it will ensure a long-term energy supply and reinforce the role of natural gas as a clean and sustainable match with renewables for the energy mix in Europe.

"In the field of transport, the extension of the indicative maps of the Trans-European Networks (TEN-T) can provide a solid platform to enhance our transport and trade dialogue. Here, let me emphasise that we need to finalise a long-term investment action plan as soon as possible. I would like to explain why. Today, Azerbaijan is an architect of some major transport projects across the wider region, including EU’s neighbourhood. Together with our partners, we promote East-West, North-South and South-West corridors. East-West Corridor is closely interlinked with EU-China Connectivity Platform, EU’s Strategy on Central Asia and EU’s very recent Joint Communication on Connecting Europe and Asia. The South-West Corridor after its completion will boost trade relations between the EU and markets like India and Iran. We are doing the same about constructing a regional web of reliable broadband digital connections. We are the initiator and promoter of Trans-Asian Super Information Highway project called TASIM. All of the efforts of Azerbaijan lead to a win-win situation for our neighbours and partners who are willing to develop friendly and strategic relations with Azerbaijan. It will boost trade across the wider region, which also will have a multiplying effect across Eastern Partnership countries.

"Using this opportunity, I would like to say that Azerbaijan is holding Chairmanship in the Black Sea Economic Cooperation Organisation (BSEC). Transport and connectivity is the priority area of cooperation during this Chairmanship, and we will hold transport and ICT ministerial meetings in the end of October and in early December. BSEC constituency includes 3 EU member states, some candidate countries, associate partners, and other important neighbours of both Azerbaijan and the EU. So, it actually covers EaP geography and even a wider neighbourhood. There are regional synergies between BSEC and the EU. Connectivity should be one of those elements of cooperation. Azerbaijan has much to offer in that regard, too. In BSEC, we have interaction with the EU – an ad hoc working group and even COEST – BSEC meetings. In fact, when we end our BSEC Chairmanship in mid-December in Baku at Foreign Affairs Ministerial meeting, passing over a title to our friends from Bulgaria, we are already discussing the perspectives of organizing BSEC-EU high-level conference in Brussels. It will be during Bulgaria’s Chairmanship in BSEC and during Romania’s Presidency in the EU Council. With both countries – be in within EaP, or within Azerbaijan – EU track, or in a different regional format – we have things to discuss. But they concern many of us. They concern EaP as well.

"In order to take full advantage of these opportunities, we also have to further promote the mobility and people-to-people contacts among us. Be it students, businessmen, musicians or mere tourists. This is why we attach particular importance to the successful implementation of readmission and visa facilitation agreements, which should pave the way for launching the dialogue on visa liberalization between the EU and Azerbaijan.

"Armenia-Azerbaijan Nagorno-Karabakh conflict resolution is one of the biggest issues for sustainable development of the region. Latest two of my meetings with Armenian counterpart and conversation of the President of the Republic of Azerbaijan with the Prime Minister of Armenia and what it was heard behind closed doors give us positive impulse on opportunity for moving forward. After the upcoming elections in Armenia it will be more clear whether Armenia is ready for peace and stability, which firstly means withdrawal of their troops from the Azerbaijan’s lands.

"Azerbaijan on its side, as it was declared on numerous times, is ready to launch substantive and result-oriented talks.

"Soon next year we are going to mark the 10th anniversary of the EaP. We witnessed many things. But some things just don’t change. The international order is challenged by turbulences in trade, cyber-attacks and unpredictable policies. EU political actors will probably need to adapt the EU to the changing environment in a lengthy period. We hope that the enthusiasm of the EU’s engagement with Eastern neighborhood will not be affected.

"I would like to recall that revised ENP has put forward the stabilization as the most urgent challenge in many parts of the European Neighbourhood. True stabilization is unimaginable without settlement of protracted military conflicts which threaten the stability and cooperation in the EaP geography. There’s no doubt that the success of EU’s engagement in the region and the future of EaP is closely interrelated with achieving security and upholding the fundamental principles of international law. We talk about resiliency. Failure to eliminate consequences of ongoing violation of these principles, as well as misinterpretation and selective application undermines rules-based European order. It undermines the very objective of resilience inside EaP and in general of EaP as such.

"There are some achievements in EaP since its inception. However, we have to admit that we need better coordinated efforts to be able to further develop our cooperation within EaP."