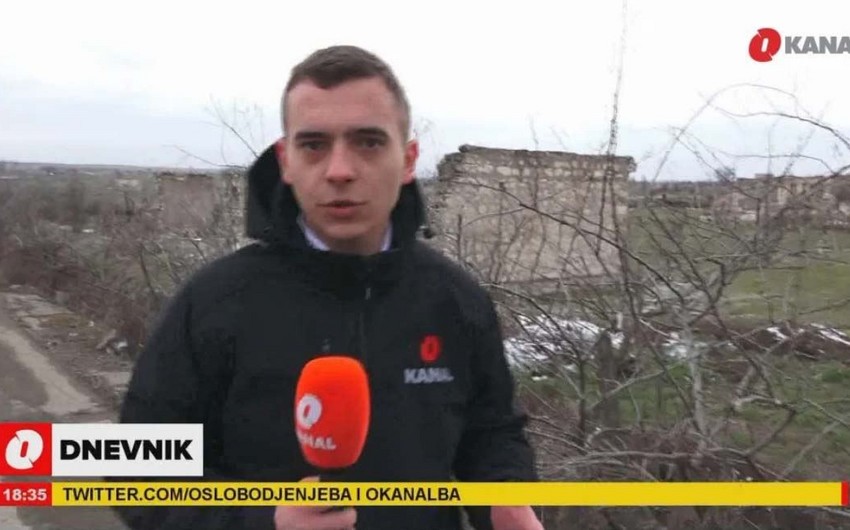 The film crew of ‘O Kanal’ of Bosnia and Herzegovina has visited Azerbaijan’s Aghdam district, liberated from the Armenian occupation, Report informs.

An employee of the TV channel prepared a report on Aghdam, which he called ‘Hiroshima of the Caucasus.’

‘All that we saw in the city is ruins. Most of the city has been destroyed, except for the Juma mosque. After almost 30 years of occupation, Azerbaijan liberated Aghdam and other territories captured in the 90s. Aghdam was the only salvation for the inhabitants of Khojaly, where one of the bloodiest crimes was committed. In 1992, during the massacre known as the Khojaly genocide, 613 people were killed. February 26 marks the 29th anniversary of this event,’ the report says.

It is noted that many Khojaly residents, saving their lives, went to Aghdam, which was fatal for them.

One of the officers of the Patriotic War, Zahid bey, recalls the night when civilians fled through the mountains and mined areas.

‘Everything happened on the night of February 25-26. We tried to get the residents out of the besieged city. We were told that the 366th regiment of the former USSR, together with the Armenians, surrounded the city. Having pulled out the wounded, we wandered forward, and then a terrible picture opened up to our eyes - the hill was strewn with the corpses of women, children, and men. For a long time, I couldn’t recover from this sight,’ he said.