Atlantico: Karabakh ghost city of Aghdam waiting for its revival 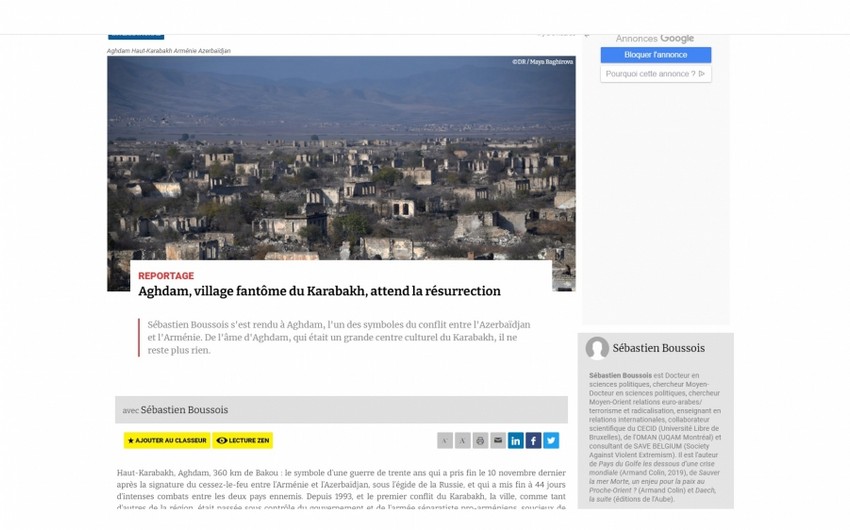 The French website Atlantico has published an article entitled ‘The Karabakh ghost city of Aghdam is waiting for its revival,’ Report informs.

The article says that during the First Karabakh war, numerous cities and villages of the region came under the control of Armenians who tried to realize the dream of ‘Greater Armenia.’ As a result of the war, 800,000 Azerbaijanis were expelled from their native land and became internally displaced persons. After the occupation, pre-war life disappeared in Aghdam, and the city turned into a ghost.

The journalist talks about the destruction committed by the Armenians in Aghdam. He writes that the city was plundered and destroyed. There is nothing left of Aghdam, which was once one of Karabakh’s main centers with its theater, hotels, and various enterprises. The world’s only Bread Museum and the famous Mugham Center were razed to the ground. Only the mosque remained, which the Armenians used as a strategic point. The Armenians dismantled everything, even the stones of the houses.

The author also draws attention to the fact that after the Second Karabakh War, when the Armenians left the territory, they burned all the houses and mined the territory. He notes that sappers are working in Aghdam, returned to Azerbaijan on November 20, 2020, and consisting of ruins. People need time to return to their homes. The Azerbaijani government announced that it would restore the city, reads the article.

The journalist emphasizes that all internally displaced persons have only one desire - to return to their native land.