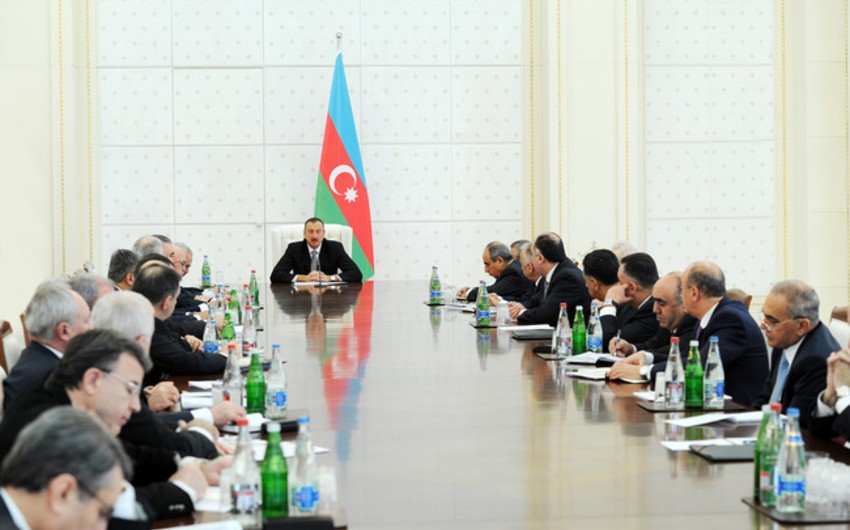 Baku. 10 January. REPORT.AZ/ President of the Republic of Azerbaijan Ilham Aliyev has chaired the meeting of the Cabinet of Ministers dedicated to the results of socioeconomic development in 2014 and objectives for 2015, Report informs citing AzerTag Agency.

President Ilham Aliyev opened the meeting. The head of state said despite various processes in the world and the region, Azerbaijan maintained its rapid development rate in 2014. “There is a strong unity between the people and authorities in our country, which is moving on the path of independence and development”.

The head of state said that despite falling oil price at the end of the year, Azerbaijan`s economy grew 3 percent, while the non-oil sector saw a 7 percent increase. “Inflation was 1.4 percent, while population`s incomes grew 4.8 percent in 2014.” “Twenty-seven billion dollars was invested in our economy, of this 16 billion dollars being domestic investment,” said the head of state.

President Ilham Aliyev said more than 30 industrial enterprises were established, a large number of new jobs was created in the country last year.

The President said the year 2014 was successful for Azerbaijan in terms of international relations, adding the country is pursing active foreign policy in bilateral and multilateral formats. “Azerbaijan is held in great respect in the world,” said the head of state adding “our country is a crucial factor in the settlement of regional issues”.

President Ilham Aliyev also touched upon the Armenian-Azerbaijani Nagorno-Karabakh conflict. The head of state expressed regret that “in 2014 too Armenia gave preference to imitation tactics and made no constructive step relating to the settlement of the conflict”. The head of state said Armenia overtly committed several provocations last year, adding “these attempts were successfully prevented by our army, and the enemy suffered big losses.

Minister of Economy and Industry Shahin Mustafayev, deputy Prime Minister, chairman of the State Committee for Refugees and IDP Affairs Ali Hasanov, chairman of the Central Bank Elman Rustamov highlighted socio-economic results of 2014 and objectives for the future.

President Ilham Aliyev made closing remarks. The head of state said processes that took place in 2014 show that this year will be very difficult for global economy. The President said that with the decline in oil price 2015 will be a test for countries rich in natural resources. “And a well thought-out economic policy, diversification process, unity between the people and authorities guarantees that this year too will be a success for our people. President Ilham Aliyev emphasized the importance of focusing on the development of the non-oil sector in 2015.

The head of state said allocation of preferential loans to entrepreneurs must be continued in 2015, management principles must be improved in all government bodies, the cases of squandering must be prevented. The President said that the implementation of economically and socially important projects, which are necessary for the country, will be continued.

The head of state praised preparation for the first European Games to take place in Baku in several months, and said that the Organizing Committee is working actively. “The European Games standard will be set in Baku,” said the President, and hailed the games as “not only a sporting event, but also an important opportunity for sportsmen and guests to familiarize themselves with our country and development processes here”.