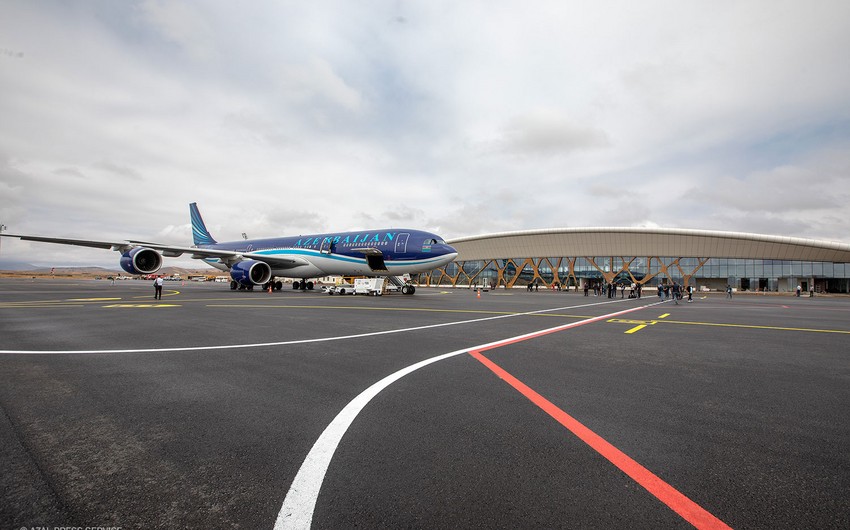 Press service of "Azerbaijan Airlines" CJSC told Report that the decision to grant international status was taken following the completion of all construction and installation works in the air harbor of Fuzuli.

In addition, the airport was assigned a three-letter code by the International Air Transport Association (IATA) consisting of letters of the Latin alphabet - FZL. This code is associated with the name of the city where the airport is located - Fizuli.

The Fuzuli airport is constructed in accordance with the highest international standards. It can accommodate any type of aircraft. The first test flight to Fuzuli was performed on September 5, when the largest passenger aircraft of AZAL, Airbus A340-500, landed at the airport.

A runway with a length of 3000 meters and a width of 60 meters is put into operation at the Fuzuli International Airport. It is fully equipped with instrumental landing and navigation systems, lighting сontrol, primary and secondary radar systems to ensure flight safety in accordance with all ICAO requirements.

The apron area is 60 thousand square meters; it is designed for the parking of 8 aircraft.

The construction of an Air Traffic Control (ATC) tower equipped with automated ATC systems is completed. This will enable the launch of flights to the Fuzuli airport under ICAO and IATA standards.

Also, on the instruction of the Head of State, international airports in Lachin and Zangilan regions also continue to be built.

In addition to the airport in Fuzuli, six more international airports have been built and operate in Azerbaijan today – in Baku (GYD), Ganja (GNJ), Nakhchivan (NAJ), Gabala (GBB), Lankaran (LLK), and Zagatala (ZTU). In addition to the mentioned airports, the airport in Yevlakh and the base of the helicopter airline ASG Helicopter Services (ZXT) in the Absheron village of Zabrat provide aviation services in Azerbaijan.