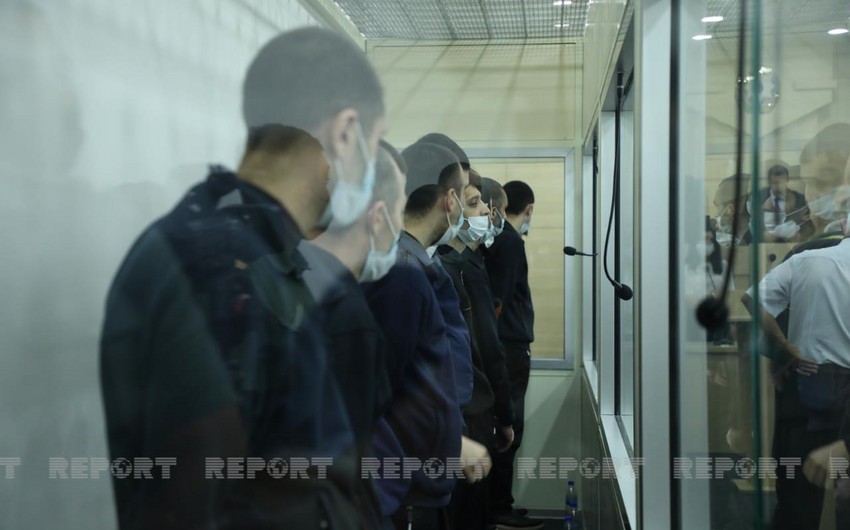 According to Report, the trial chaired by Judge Faig Ganiyev of the Baku Court of Grave Crimes decided to initiate a judicial investigation.

Then the public prosecutor announced the indictment.

The judge said that the trial would continue with the interrogation of the accused, then the witnesses will testify. Finally, the documents will be examined within the process.

Accused Gevorkyan testified freely in court. "On November 26, we were called to a military unit and given weapons, and on November 27, we already arrived at checkpoints in Lachin, saw Russian peacekeepers there, and our commanders talked to them. We continued on our way with the consent of Russian peacekeepers," he said.

Above, there were Russian peacekeepers among the Azerbaijani and Armenian servicemen. We had to stay there for 24 days. It was ordered to go down the mountain. Azerbaijani soldiers appeared before us. The commander of those soldiers introduced himself, and we surrendered. "

Answering the prosecutor's questions, the accused said that they knew that the war was over when they were called to the military unit: "When we were in the mountains, our commander was Arsen Ghazaryan. We accepted him as a commander and obeyed him. "

Later, Gevorkyan's testimony during the preliminary investigation was announced. During interrogation, he said that besides Arsen Kazariyan, they also had a leader named Arthur: "We traveled for about two hours. When we reached the mountain, we came across a car with soldiers in it. Arsen Kazariyan took us to the mountain. After leaving us there, he went elsewhere. Kazariyan and other Armenian soldiers came down. Our goal was to protect positions there. We were instructed to resist the soldiers approaching us. We stayed there until December 13. Arsen said that the territories belonged to Armenia, and we believed him. We served there in divisions. On December 13, our leader, Graj, spoke with Arsen Kazariyan, who ordered us to descend the mountain. "

A break was announced in the process.

According to Report, the indictment is announced at the trial chaired by Judge Azad Majidov.

Members of the illegal armed formation illegally entered the Azerbaijani territory, took a position in the forests in the Khojavand region's Hadrut village, and committed terrorist, subversive, and other criminal actions against the Azerbaijani military personnel and civilians. The members of these armed formations illegally crossed Azerbaijan's state border on November 26-27, 2020. As an organized group, they took up combat positions in the forest and other areas in the north-western part of the Khojavand region's Hadrut village. They attacked enterprises, institutions, and organizations, or individuals, organized explosions, committed arsons, or other terrorist acts posing a threat to the life and health of people, capable of causing significant property damage or leading to other socially dangerous consequences, intending to disrupt public safety, sowing panic among the population or influencing decision-making by the state authorities of Azerbaijan or international organizations.

"The criminal case against 14 and then 13 other members of the armed group was completed and sent to court for consideration together with the approved indictment.

"Currently, in connection with the listed facts, a criminal case against 26 more members of an illegal armed group - Mikaelyan Andranik Vazgenovich, Soghomonyan Setrak Samvelovich, Karapetyan Rafik Robertovich and other persons charged under Articles 214.2.1, 214.2.3, 228.3, 279.2, and 318.2 of the Criminal Code Of the Republic of Azerbaijan, together with the indictment approved by the Deputy Prosecutor General of the Republic of Azerbaijan, is sent to the court for consideration."