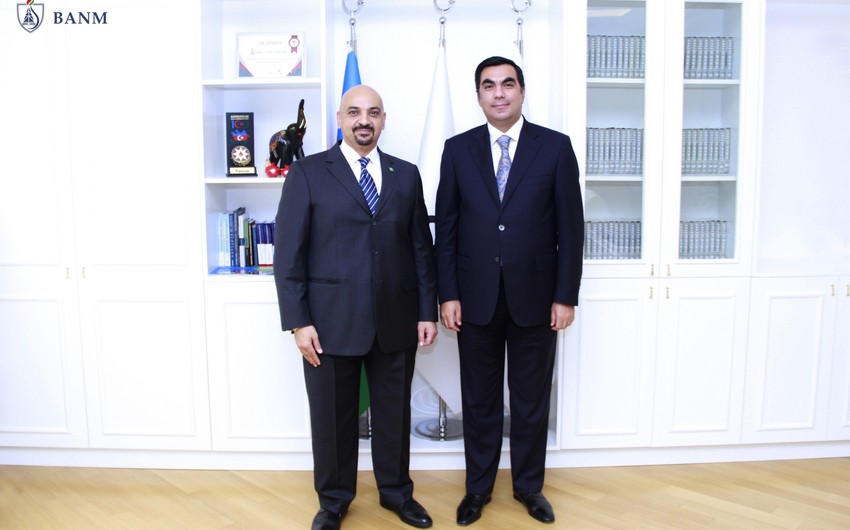 Rector of Baku Higher Oil School (BHOS) Elmar Gasimov met with a delegation from Saudi Aramco, the national oil company of the Kingdom of Saudi Arabia.

“Along with this, the school provides training in the specialties “Oil and Gas Engineering” and “Chemical Engineering” in accordance with the educational programs of the UK's Heriot-Watt University.Also, BHOS students undergo practical training at prestigious local and foreign companies. The Baku Higher Oil School is interested in cooperation with Aramco Overseas in this direction. Presently, a representative office of the largest national oil company of Saudi Arabia operates in Baku. We are interested in expanding our partnership with Aramco Overseas as soon as possible.We would very much like BHOS students to undergo an internship in the company you represent, and at the same time, students from Saudi Arabia to study at our school. It is also desirable that Azerbaijani students participate in Aramco Overseas’ scholarship programs,” Elmar Gasimov said.

Director General of Aramco Overseas Company Azerbaijan Ahmad Al Shiha, in turn, noted that there are intense socio-economic and cultural ties between Azerbaijan and Saudi Arabia.

Aramco Overseas is always looking for new employees. And this means that we can benefit from BHOS graduates in terms of hiring new specialists. The company can hire them after they pass the necessary training. As a company, we can provide training for students from Saudi Arabia at the Baku Higher Oil School with full payment of scholarships. Every year, as part of Aramco Overseas’ scholarship programs, up to 500 students undergo training in countries such as the UK, USA, Korea, Japan, China, Singapore and Germany,” he said.

The director general also proposed that BHOS specialists conduct trainings for the employees of Aramco Overseas.

Towards the end of the meeting, a decision was made to sign a Memorandum on Expanding Cooperation.

Note that Aramco Overseas, headquartered in Dahran, Saudi Arabia, is also one of the largest oil companies in the world in terms of oil production and oil reserves.The company was founded in 1933 by the government of Saudi Arabia and the US company Standard Oil of California. Aramco Overseas manages oil reserves of 260 billion barrels, accounting for a quarter of the world's proven oil reserves.T he company also owns modern oil refineries and gas refineries throughout the country. As of April 2018, the company has its representative office in Azerbaijan.