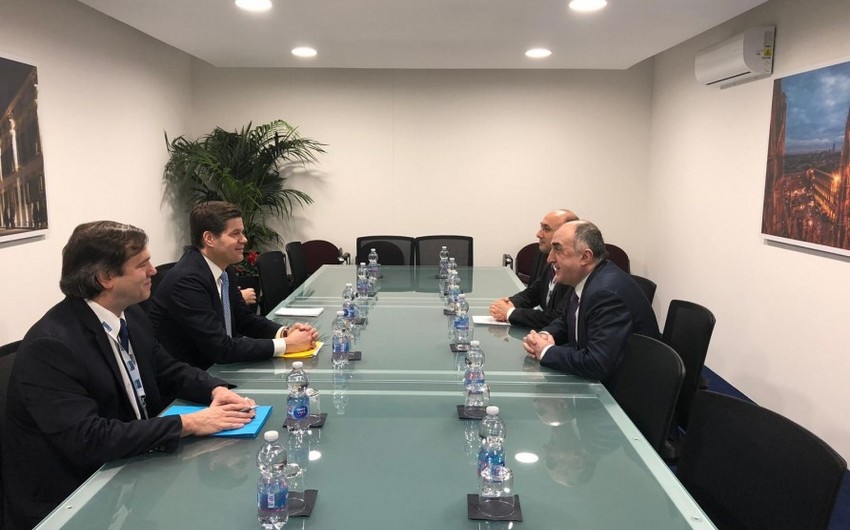 Baku. 7 December. REPORT.AZ/ Minister Elmar Mammadyarov met with the US Assistant Secretary of State for European and Eurasian Affairs Wess Mitchell on the sidelines of the 25th session of the OSCE Ministerial Council.

During the meeting, the sides expressed satisfaction with the existing partnership relations between Azerbaijan and the United States and exchanged views on a wide range of issues of bilateral cooperation agenda.

Minister Elmar Mammadyarov briefed his interlocutor about the current state of negotiation process on the settlement of Armenia-Azerbaijan Nagorno-Karabakh conflict and the recent meetings with the OSCE Minsk Group Co-Chairs and Armenian acting foreign minister held in Milan on 5 December.

Furthermore Minister Elmar Mammadyarov spoke on important energy and transport projects implemented with the initiative and direct involvement of Azerbaijan, in particular the Baku-Tbilisi-Kars railway and the Southern Gas Corridor, and praised the US support for the implementation of these projects.

Wess Mitchell noted that the bilateral relations between the two states are developing dynamically and commended Azerbaijan’s contribution to the NATO Resolute Support Mission and the fight against terrorism.